Viewed from Ol-olchura Village in Sekenani Location after a night of heavy rains, the vast plains of world-famous Maasai Mara National Reserve in Narok County is nothing short of breath-taking The warm morning sun, the smell of fresh dung, and the glitter of morning dew on the grass against the backdrop a group of some morans chatting beside a herd of cattle lazily chewing cud completes the mosaic of serenity. Ol-olchura, is sandwiched between Maasai Mara to the west and Nashulai and Mara Naboisho conservancies. “The Mara is beautiful, the vast plains awe visitors just like the smell of cow dung and milk. There are vast fields to graze but that does not mean you can snore the night away, you have to keep vigil,” says Dickson Ole Kasoe. Ole Kasoe knows too well the good and the ugly side of the Mara. He is a freelance tour guide registered under Maasai Mara Tour Guides Association that brings together more than 2,000 local guides. He knows the smell of blood from a sheep or cow mauled by a predator. He also knows how it feels to forego sleep to keep the predators away. “It is a delicate balance," he says. "We survive on tourism because of the wildlife but then we are also pastoralists who entirely depend on our herds.” While the rainy season might be a blessing for the Mara, in Ol-olchura, it is a curse, one that converts the picturesque plans into killing fields for prey and predators. Costly retaliation The predators strike on the herder's cattle, goats and sheep. The herders retaliate by poisoning the carcasses. “In some instances, pastoralists can lose up to 200 sheep in one night and up to three instances of attack in a week, driving the owners to resort to poisoning,” says Nelson Leseiyu Then the hunter becomes the hunted. The cascading effects of poisoning, not only kills scores of lions, cheetahs and hyenas but also the plains' undertakers-vultures. Such is the raging human-wildlife conflict that agro-vets are making a killing selling poisons. “They are just common insecticides, herbicides and fungicides but their effect on the delicate ecosystem is devastating," says Leseiyu. Lack of fences to separate the conservancies, reserves and villages in the wider Sekenani, coupled up with poorly- constructed cattle sheds do not make matters any better. The herders say the bureaucracy of processing compensation for livestock killed by the predators of the Mara makes poisoning the easier option. “In Sekenani, cases of human-wildlife conflicts are intense. In a month, I sign several compensation forms mostly on loss of livestock,” says Sekenani Chief Moses Ole Kasoi. But the poison kills more than the predators it is meant to kill.  “A single carcass can kill up to 500 vultures," says Ole Kasoi. Vultures play a critical role in the expansive Mara ecosystem. They are the undertakers of the wilds, cleaning carcasses that left to rot in the open plains; would become breeding grounds for highly dangerous germs. Of the eight species of vultures in Kenya, four (White-backed, White-headed, Hooded and Rüppell’s) are critically endangered, two- Egyptian and Lappet-faced, are classified as endangered, one (Bearded Vulture) is near threatened and Palm Nut Vulture is classified as the least affected. According to Darcy Ogada, a researcher at Peregrine Fund, an international organisation that conserves threatened and endangered birds of prey, the biggest threat to vultures in Kenya is poisoning. “In Kenya poisoning is mostly unintended and is as a result of retaliation against predators.  When a pastoralist or farmer loses livestock to a predator they sometimes lace the remaining carcass with a highly toxic pesticide intended to kill the predator, but this almost always ends killing large numbers of vultures that typically discover the carcasses,” says Dr Ogada. The researcher says that the vulture population has been steadily declining across the world, robbing mother nature one of the most effective scavengers; one that provides invaluable ecological, economic and cultural services in the wilds. “Most notably, vultures provide free and highly effective sanitation services. The vulture-governed cleaning service protects the health of humans, domesticated animals, and wildlife,” says Ogada. Data from African Wildlife Poisoning Database indicates that since the year 2000, 775 vulture deaths have been recorded in Kenya. The cases are however underestimated as those reported are few and sometimes only confined to areas where conservationists are. “It is important to note that the poisoning incidents are based on where conservationists are working and are not representative of the situation in Kenya as a whole. There are also a serious underestimation of the numbers,” says Ogada. 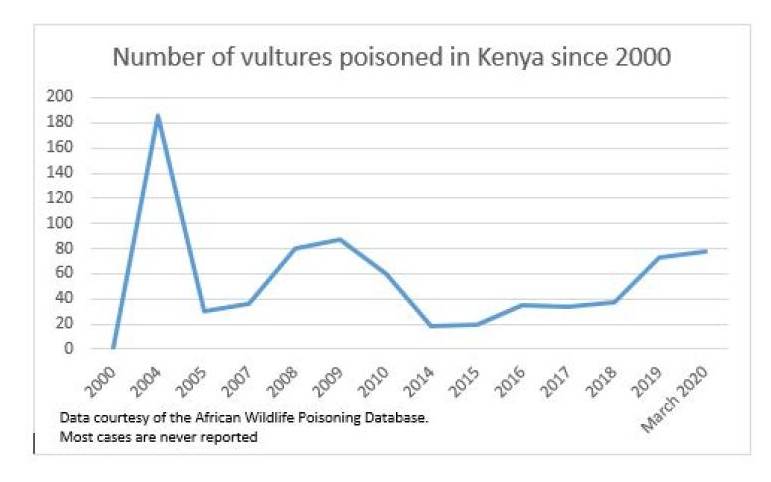