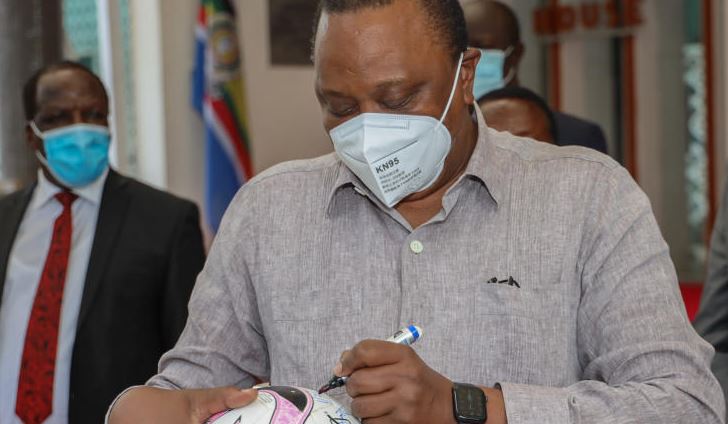 President Uhuru Kenyatta (above) now finds himself in a difficult position as he seeks to appease his new allies in Parliament without losing his core support in Jubilee Party. The Orange Democratic Movement (ODM) and Kanu are demanding a share of the spoils after allies of Deputy President William Ruto were kicked out of key positions in the Parliament This presents a headache for the president if his support in the House is to hold.

Having burnt bridges with Ruto, the president now faces a tough balancing act to please his new friends in a complex game of political chess that revolves around control of government business in Parliament, Building Bridges Initiative (BBI) and a possible referendum push. After the political divorce between Kieleweke and Tangatanga wings of the party, Uhuru has been forced to bolster his numbers, leading to the cooperation agreements with Kanu, Wiper, Chama Cha Mashinani (CCM) and a closer working relationship with ODM. Last week, however, Parliament failed to approve names to various committees, following a disagreement between Jubilee and ODM on the composition of the teams. Although the two sides appeared to downplay the matter on the floor of the House, it later emerged that ODM had made demands that Jubilee honour its promise to have Raila’s party chair three crucial committees - Justice and Legal Affairs, Delegated Legislation and Education. The Justice committee and that on Delegated Legislation are expected to play a critical role in shepherding the reform process under the BBI after the validation task force completed its work on June 30. On Friday, Kanu added more fuel to the fire after it demanded that its members also be rewarded with powerful committees, including chairing key working teams. Kalonzo Musyoka’s Wiper party is also angling for the spoils after it signed a cooperation agreement with Uhuru’s Jubilee wing a couple of weeks ago.

At a party National Executive Committee (NEC) meeting at its headquarters, Kanu said it had members with experience to head committees in Parliament and tasked party chairman Gideon Moi to negotiate for its members for plum positions. Yesterday, Kanu MPs told the Sunday Standard they will be negotiating for plum positions in the House committees on Tuesday. “We are negotiating, we will not demand but at least we are eyeing a number,” Tiaty MP William Kamket said. His Samburu West counterpart Naisula Lesuuda was more specific: “We are looking for at least one chair and three vice-chair positions in critical committees. Loyalty should be rewarded and Kanu has come out to stand with Uhuru’s government.” Reservations

The Sunday Standard learnt that Kanu is fronting Kamket as chair of the National Assembly Delegated Legislation Committee, in what could further complicate the arithmetic for Jubilee, given that ODM is also eyeing the same position. ODM chairman John Mbadi wondered why some Ruto allied MPs had been fronted for powerful committees even after they were de-whiped. Mbadi said ODM had reservations about the proposed changes by Jubilee to the Justice and Legal Affairs Committee (JLAC) and the Delegated Legislation Committee, as some of the names were of people who were opposed to BBI. “We were ready with our list to effect the changes, but when we looked at the proposed names to serve in the JLAC and the Delegated Legislation committees, the two teams that will be processing the BBI report in the House, we realised they included some people who have strongly been opposing the BBI,” he said. The National Assembly minority leader also revealed that there was a pact with Jubilee that they cede to the minority the leadership of the Finance and Education committees. However, Mbadi said when they looked at the list that Kimunya was tabling, they realised that the two were mainly composed of MPs who were allied to the Tanga Tanga wing of Jubilee. Stage a coup “We felt that with such membership, we would not be assured that this pact would hold. We had reservations and felt that the Tanga Tanga MPs could stage a coup and take over the leadership of the two committees,” said the Suba South MP. Homa Bay Woman Rep Gladys Wanga said the negotiations were still ongoing between the ODM leadership in the House and Uhuru’s Jubilee wing. “The leadership is still lobbying for the committee seats,” said Wanga. Before the fallout between Uhuru and Ruto, Jubilee enjoyed a ‘tyranny of numbers’ in the House, which it used to push through its interests. The party had majority in all committees and chaired all except the Public Accounts Committee (PAC) and Public Investments Committee (PIC), which were chaired by ODM as they are mandated to oversight. Under the current arrangement, control of Parliament has tilted in Uhuru’s favour, neutralising Ruto’s influence. But what has offended Uhuru’s allies is a decision by National Assembly Majority Leader Amos Kimunya to develop a list that appears to shortchange the president’s partners. Notable Ruto confidants such as Kikuyu MP Kimani Ichung’wah, his Baringo counterpart William Cheptumo, Tinderet’s Julius Melly and Adan Mohammed of Mandera West were given soft landings in different plum committees, including those expected to lead constitutional reforms. Ichung’wah, for example, was proposed to the Finance Committee after losing his position in the Budget and Appropriations Committee, while Cheptumo who chaired the Justice and Legal Affairs team received a soft landing in the Committee on Delegated Legislation. Succeeded itself In the justice committee, Uhuru replaced Tangatanga members with only Kieleweke members, indicating his intention to have a stranglehold on the committee, and sidelining Kanu, Wiper and ODM. Ironically, Cheptumo was assigned to the Delegated Legislation Committee after Jubilee kicked out another Ruto ally, Uasin Gishu Woman Rep Gladys Shollei. The committee is responsible for developing subsidiary legislation to operationalise laws passed in Parliament. The Jubilee partners are angry that the ruling party appears to have succeeded itself in key committees, translating into a zero-sum game, where members who had been de-whipped were given a soft landing and swapped. ODM, Wiper and Kanu are infuriated by the fact that Ruto allied MPs could still manage to sneak into influential committees, with a possibility of some of them getting elected as chairs and vice-chairs.