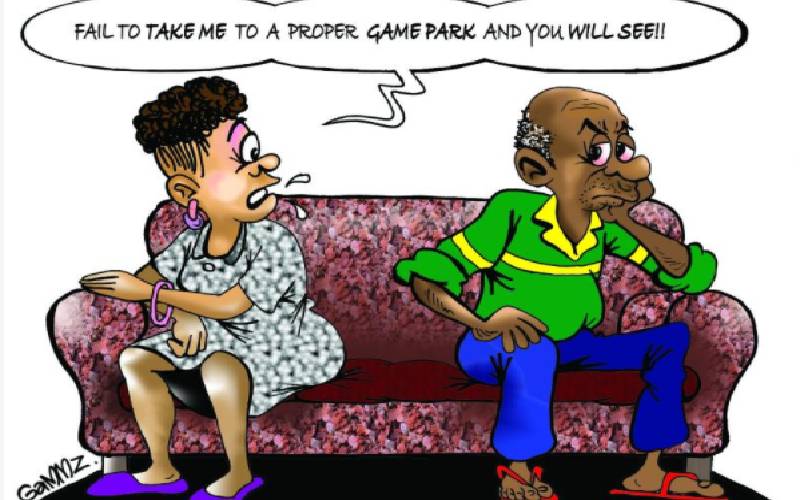 Uncle Harold cannot understand why we call it the Good Friday when we are remembering the day Jesus was crucified. He does not understand why it is called Easter, either, while a big chunk of the world’s Easteran population is not Christian.

One thing that Harold is sure of, though, is that Easter brings with it a lot of wine and a lot of guests from the city. And some of these people are generous to a fault.

It is such Sundays, the Easter Sundays, that see even Ndumia, Harold’s rival for church leadership, attend service.

Like the security agencies that help cart away tithe from those massive city churches, Ndumia and Sue keep a watchful eye on the offertory bag and make sure to get their portion at the very end of the service. It is usually a fruitful Sunday.

That is why Harold was at a loss when President Uhuru Kenyatta announced new containment measures last week.

With Nairobi cut off from Nyeri, Harold knew that it was going to be difficult to raise the amounts he does every year during holidays.

Like Judas Iscariot, whose avarice gave us Easter, Harold would sell his church if he was promised a healthy return. My uncle questions why Judas, after receiving the 30 silver coins, ended his life instead of enjoying the loot.

The announcement by the president, however, saw many people escape the city for the village. I told Harold that the offertory bag was going to swell either way but he brushed it aside. “Most of those who have already come are people who are escaping the city. They are coming because life there is very hard, not because they want to celebrate. You do not expect them to have excesses for me.”

It has been tough in Gitegi. The rains that recently used to come at night have delayed, perhaps afraid of the curfew and unaware it is not operational in the village. Even chickens are no longer interested in laying eggs, and cows have become hesitant to produce milk. This means that those people who always brought Harold farm produce as offertory now only give him blank grins.

Harold had planned to take Sue to a conservancy in Nanyuki on Easter Monday from the money Nairobi people were to bring to the offertory basket. And yours truly, who is Harold’s chief butler, was to be left spreading a rumour that church had been postponed because Harold had gone to watch Christ resurrect.

Sue has always wanted to visit a game park. The first time she told Harold about it, Harold took her to the local playgrounds, where teenagers with iron limbs clatter into each other in the name of football.

Sue was not happy. After bullying the local tailor for a kitenge, on credit, Sue did not see the fun in standing on the side of an endless expanse of bare earth in which boys fought away their parents’ grudges and called it football.

“Am I a joke to you? By a game park, I mean a place where animals live…”

“First, you are neither fun to be around nor funny, so you are clearly not a joke. Also, do we not have animals here in Gitegi?” Harold protested.

“Fail to take me to a proper game park and you will see,” Sue warned, gathering the loose hems of her kitenge and vanishing before Harold could shout, “But I can already see!” So the plans for the tour kicked off. As the sons and daughters of the village would be visiting over Easter, yours truly would announce special Easter prayers where every person has to give to Harold, and Covid-19 would be prayed away.

Harold had even made an estimation of the amount of money he was going to collect. We used that against the charges at every game park and, settling for convenience, chose one that is not very far from Gitegi.

But when President Kenyatta started his speech and said: “Fellow Kenyans” then glanced up then straight down, almost as if he was avoiding eye contact with Harold, who was staring into my phone following the live stream, Harold knew that all hell was about to break loose.

As if this is not enough, Harold will also be having a hard time with the parents of Standard Eight candidates. In his money for prayers bid before the exams, he had promised to refund cash given by parents whose children will not score 350 marks.

There’s little chance the majority of those he prayed for will hit this.

Also, Good Friday’s service was attended by only a handful of people, and the offertory was not enough to finance Harold and Sue for their trip tomorrow.

Yesterday, he sent me to families whose sons and daughters are rumoured to be doing well in the city.

“Tell them that if their children send me the money, I could pray and the makeshift walls around Nairobi will be torn apart. They can come home for Easter!”

The villagers did not buy into that.

If you hear screams and sounds of a tearing cassock tomorrow, do not ask what that is. It will be Sue breaking a few bones that cannot keep a promise.

KenGen has four decades of experience in geothermal power.

"The cost of seeds and fertilisers is high and unaffordable to farmers and this will hurt production," said Pokuse.

By Tobias Chanji | 5 days ago