A family united in love of adventure

At face value, they look every bit like the family next door. Until you get to know the glue that binds them together – their love for hiking.

Meet the Ayubs. There is the dad, Job, who has no qualms with people calling him Ayub, and so we shall call him; 18-year-old reserved but witty daughter, Sonia; and sons, 13-year-old Triumph and doting 10-year-old Theo, he with boundless energy.

When the whole world saw nothing but gloom due to the Covid 19 pandemic lockdowns, the Ayubs spent this time plotting for their next escapade, of course when the country reopened. But this love for the outdoors had begun much earlier.

Since the last half of 2019, no mountain peak was so daunting for them to conquer, no forest so dense to haunt them, and certainly no river too deep to ford. Ayub set to do whatever it takes to prepare his children for whatever life could throw at them.

If it is unique, challenging, and secure, the Ayubs will try it out. And with the guidance of travel professionals such as Hikemaniak, planning and executing the plans has been a walk in the park. 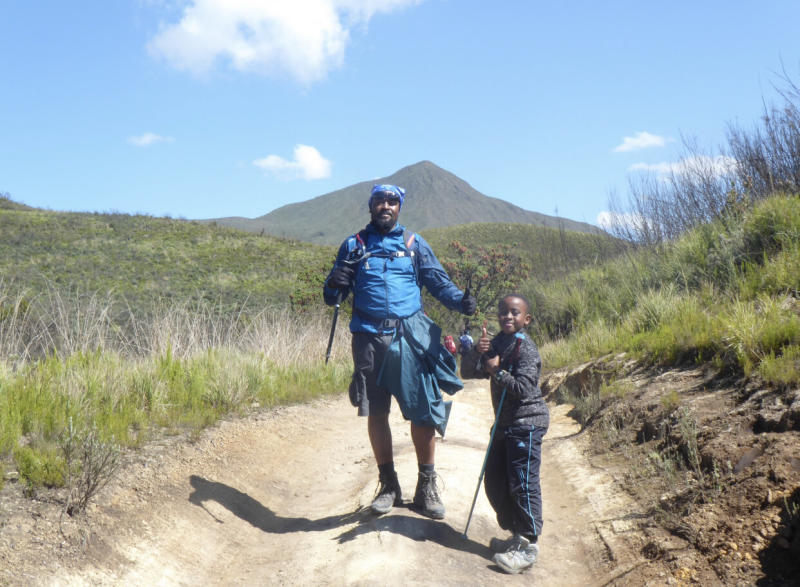 Last year alone, the family did at least 20 hikes and camped in some of the country’s most unforgiving terrain. There is Mount Kenya, the country’s highest. And the lesser ones too – Longonot, Chuylu, and the Ngong Hills. Kilimanjaro is now in their sights.

Then the not so obvious. Where on earth is Ol Donyo Le Satima, or the Table Mountain (in Kenya, not South Africa)? Or Mount Mtelo? When did you last wake up and decided to head for a well-deserved holiday on top of Mount Ololokwe or perhaps the Elephant Hill? But then we are talking of the Ayubs, a family that is never afraid to face the wind. A resilient team that sees the goal beyond the pain.

I first ‘met’ Ayub on phone. I weighed my words carefully. We were strangers. The only point of convergence? Our love of the outdoors. “I was told that you are a serious hiker…and that you take your family along in your hikes?”

“Yes, we are a family of hikers. All of us including 10-year-old Theo.”

There was only one way to watch the family in action; join them in a ‘small excursion’ not far from the city. A visit to The Forest would do.

The name gives it away. The Forest is located, well, on the southern end of The Aberdares’ Kereita Forest, in Lari, Kiambu where the affable Nigel has created a series of adrenalin sapping activities that test every fibre in your body. 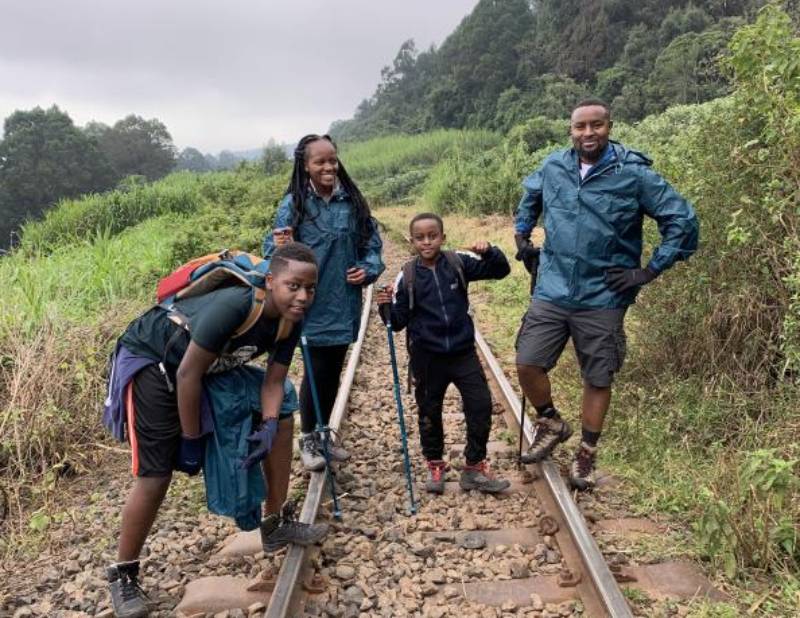 Early morning and we were deep in the cool mists of the mountain range. A team of enthusiastic young men and women had already gathered for teambuilding activities.

“Set your watches for the hike,” Ayub told the youngsters. “The digital watches track not just your performance or distance covered but your vital signs as well,” he says.

The hike involved going down a steep valley that led to a small waterfall. Here, I noticed how ill-prepared I was for the hike. The droplets from the waterfall were enough to wet my canvas shoes within seconds, a far cry to the well-padded hiking boots of the Ayub clan. Did I mention I almost tripped on the moss-covered rocks on the river?

The trek up the hill back to the main lounge is not for the fainthearted either. I was always trailing the team, panting. But at least that gave me time to listen to some of their most memorable moments. Stories of fellow hikers getting lost in Mount Mtelo (Mtelo is the sacred mountain of the Pokot and one of the highest peaks in Kenya).

We hiked further as Sonia regaled me with tales of how, just a few weeks ago, the family spent a whole night roasting maize in a Pokot homestead and chewing loads of sugarcane. Theo wanted to practice his fire-making skills here, thanks to a wristband that consists of a compass, a whistle and a flint fire starter. I listened, and panted some more. I was the slacker here. But I redeemed myself on the zipline, beating Triumph, his name notwithstanding, who needed a few pushes from Sam, the attendant, to cross the finish line.

In between the activities – and to allow me catch some breath – I needed to know what inspired the Ayubs to have an affinity for the tough life outdoors.

The Covid 19 pandemic provides part of the answer.

“William Schaffner, a professor of preventive medicine at Vanderbilt University said, ‘This virus really likes people being indoors, in an enclosed space for prolonged periods of close face-to-face contact.’”

To the Ayubs, being in the wild presents them with a more secure environment as regards exposure to this virus.

“We had more free time on our hands since the schools were closed. The children needed to take a break after a whole week of online classes. Business was at its lowest if not non-existent. We found a rare opportunity to get out every other weekend and enjoy our wonderful countryside,” he says.

The Ayub gets philosophical. “Psychologists have this widely held believe that exposure to nature goes a long way to alleviate modern societal pressures. Hiking has afforded us a rare opportunity to appreciate and value more important things in our lives like relationships, sharing, and our community,” he tells me.

It is about being outdoors, he says, the different challenges and scenarios that require on the spot decision making. It is about teamwork and unprecedented perseverance to vagaries of nature. It is about challenges that sharpen the family’s mental and physical frames.

Ayub’s family is now more aware of each member’s individual strengths, weaknesses and ability to tap on this to advance their collective goals.

“Being out there in the wild, we are at times faced with threats and this calls upon each of us to put common good above self. In addition, we now believe in our ability to not only survive but also make it in any given social or environmental setting. The children’s interpersonal skills have greatly improved. They are able to bond and make friends with new acquaintances within a very short time, their confidence levels are admirable and their sense of judgment more robust.” What else could be a father’s pride and joy.

We did several rounds of archery under the tutelage of The Forest’s ‘Robin Hood.’ Sonia emerged the champion, even bursting a pair of balloons hung a dozen metres away. Triumph, …well, he tried. But he had aimed and shot his father earlier – in paintballing – and was happy about it. Theo won in the junior category. As for Ayub and I, some arrows must have landed in Kimende.

We parted company past seven in the evening. For the Ayubs, the next call of the wild just got louder.

Previous article
Facebook to ban ads promoting weapon accessories, protective gear in US
Next article
When her marriage fell apart, she found solace in music