If it ain’t broke, don’t fix it 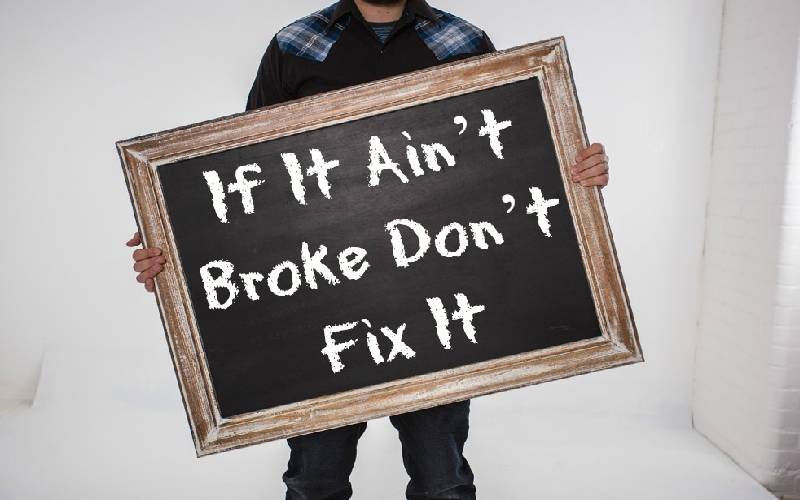 I was having lunch with family recently when my mum handed me her mobile phone and asked me to save some numbers for her. This would have been a simple enough task if it was a smartphone. But instead I was dealing with a ‘manual’ phone because my mum is one of the most practical people I know. I could almost swear that the old saying, ‘If it ain’t broke, don’t fix it’ came from her.

That is one trait I’ve inherited from her. My credo is comfort and functionality before fashion. This applies to my clothes, shoes and household items. It’s not that I don’t like nice-looking things, but they must serve a practical function as well. Whenever I am buying mugs, for instance, my mind wants to know how much tea or coffee they can hold. If they’re small then I consider them a waste of time especially since I discovered that it is impossible to make a great cup of tea twice in a row. Even when served from the same flask, it will taste different because you didn’t quite get the sugar right or something. So better the large mug once and for all.

Anyway, as I struggled to input the numbers using the no longer familiar keypad (now that we’ve all gone smart) while my food grew cold, my sister declared that it was high time we got Mum a smartphone, to which she emphatically refused. As we tried to build a case for buying her a new phone, she stopped us with, “All I need is something for phone calls and text messages.” And that was that.

There’s a part of me that is envious of how simply my mum lives. She does not know or care about Wi-Fi or data bundles, which means her airtime and battery last longer than ours, and her life is free of the constant noise created by WhatsApp and other social media platforms.

She is not concerned about being the first with the news so newspapers and TV still work just fine for her. It also means online taxi services are foreign to her; she has a regular taxi guy with whom she makes appointments and then waits patiently for him to arrive to pick her up. No calls every five minutes to ask “Uko wapi?” For her, the only necessary phone call is to cancel.

But back to my attempts to input numbers in her phone. In the end I managed only two - after several mistakes - before I gave up on the others. But I felt my young ones would have been impressed that I was helping someone else with phone technology. The usual story is them helping me navigate my smartphone. They have taught me practically everything besides making/answering calls and texts – including how to take screen shots, select more than one picture from my gallery, search for a particular message on WhatsApp (I used to scroll and scroll....)

Photos to humble them

Admittedly they, like the rest of their generation, are brilliant with all things technology. But every so often, just before they get big heads because they know stuff their parents don’t, I remind them where they came from. On one wall of our sitting room is an actual photo gallery with lots of evidence of their earlier days. The pictures chronicle the various stages of their development. In some they are posing in diapers or grinning toothlessly, in others they are naked tiny tots in the bathtub.

When the photos first went up on the wall there were some protests about the not-so-flattering ones. But I insisted (it is my house after all) because I knew how they would help me in future. And I was right (as all mummies around the world are). Every once in a while there’s need for a short trip down memory lane to clip a few wings and trim some horns.

Besides the photos, I like to remind them that I have been where they are now, but they’ve never been where I am. So my minor victory with my mother’s phone is valid because I STILL know a lot more than they do. And mothers are always right.

By Esther Muchene 3 1 day ago
Working out: Stay motivated even when spent