Nobel Laureate Wole Soyinka is on the rampage again, picking fresh wars with critics of his works and his recent declarations about African writing.

His latest battle is with people in his country he calls “homicidal clerics” for suggesting he was responsible for the accident that left fellow Nigerian writer Chinua Achebe wheelchair-bound until his death.

He had given fellow writer a spotless ram as a gift for his 60th birthday. The suggestion has left Soyinka fuming at those that “continue to sow poison in the minds of the susceptible” in a scathing release titled The Village Mourners Association.

Here, he argues that it was not good for people to say that the ram he presented to friend Chinua Achebe on a birthday was the cause of the accident.

According to the Nigerian Tribune, Soyinka reveals what happened about the ram.  “What happened was that I found myself unable to return to Nigeria for a Colloquium in honour of Chinua’s sixtieth birthday. My dramatic mind immediately scrambled for some striking manner of compensation.

“So I telephoned a business friend who had some agricultural connections in Delta State and told him: find the chunkiest, spotless ram in Delta State – all white or all black, but a thoroughbred of striking physique. “Find a leather pouch, tie it to its neck with the following message and deliver it at the venue of the Colloquium. I no longer recall the exact dictated wording, nothing inspirational, just the usual felicitations and injunctions to turn that ram into asun for general feasting. “Those who attended the event will recall the grand entry of the gift - as reported by one and all, including the foreign visitors, and Chinua’s reported reaction, seated on the podium...”

The 78-year-old writer recently blasted those suggesting Achebe should get a posthumous Nobel, describing the calls as “obscene and irreverent” since they were largely no futile. Achebe, he insisted, was not the father of African Literature but had achieved enough in his lifetime to deserve protection from such “desecration”.

Soyinka is also caught in a foul-tempered argument with writer Adewale Maja-Pearce, which the latter claims has its roots in a bad review he once wrote about Soyinka’s novel You Must Set Forth at Dawn.

In a recent interview with SaharaReporters,  Soyinka had referred to Maja-Pearce as an “inept hustler” and a “sterile literary aspirant”. He dismissed one of the writer’s books, Peculiar Tragedy, on the famous poet ,  JP Clark, as “a compendium of outright impudent lies, fish market gossip, unanchored attributions, trendy drivel and name dropping, a ghetto tract that tries to pass itself up as a product of research.”

After he had been released from detention for condemning the role of Nigerian government during the Civil War, Soyinka fired a missile at Professor Clark. Soyinka alleged that Clark was spreading rumours that he (Soyinka) had contacted syphilis in jail.

But Soyinka is more than the bad-tempered colossus he seems to be today. Wole Soyinka is among the most widely read African writers whose literary works have received much critical acclaim.

He is one of the pioneers of modern African drama and his works have been studied far and wide. As a writer, he has lived to rub shoulders with who is who both in the literary and political circles.

Apart from his glittering literary career, Soyinka has been active in Nigeria’s political history and its struggle for independence and this has seen him getting arrested and put into confinement by the Nigerian government.

He has also criticised many Nigerian and other African dictators and political tyrannies that saw him go into exile during the reign of General Sanni Abacha to evade planned arrest and execution.

Some critics have judged Soyinka basing on his hard-to-comprehend The Interpreters. However, his writings need to be assessed as a whole.  As one of the most accomplished African writers, his many plays include: The Swamp Dwellers, The Lion and the Jewel, A Dance of the Forests, Before the Blackout, Kongi’s Harvest, The Road, The Trials of Brother Jero, King Baabu and Death and the King’s Horseman. He has also penned two novels: The Interpreters and Season of Anomy as well as poetry collections, essays and memoirs. His memoirs include: The Man Died: Prison Notes, Ake: The Years of Childhood and You Must Set Forth at Dawn. In totality, Soyinka has over forty publications to his name. He is also a fierce literary critic, who in one of his writings, Myth, Literature and the African World, criticised Senegalese poet and politician Leopold Sedar Senghor on the politics of Negritude. He wrote: “The danger of negritude was that, as a result, it could easily be reincorporated into European model in which it functioned only as the antithesis of white supremacy as a new universal paradigm.”

Since literature is not created in a vacuum, Soyinka’s writings were heavily influenced by his personal experiences including the Yoruba culture and god, Ogun.

And in order to understand his works, one needs to relate such experiences with the works under study as per the Freudian theory. Furthermore, structuralism, postcolonial theories could be adopted too taking into consideration the contents and style of his works. As a writer, the central themes in his works include: corruption, corrupted African culture verses modernity, failed political leadership, hypocrisy and rapid evangelisation of the population.   His work A Dance of the Forest, criticises Nigeria’s political elites, satirises the fledgling nation by showing that the present is no better than was the past.  The Lion and the Jewel chronicles how Baroka fights with the modern Lakunle over the right to marry Sidi, the titular Jewel. Lakunle is portrayed as the civilised antithesis of Baroka and unilaterally attempts to modernise his community and change its social conventions for no reason.

The most prominent theme of this story is the rapid modernisation of Africa and evangelisation of the population. This has driven a wedge between the traditionalists and the modernists who want to see the last of outdated traditional beliefs at all cost.

There is also the conflict between education and traditional beliefs. Death and the King’s Horseman is based on a real incident that took place in Nigeria during British colonial rule: the ritual suicide of the horseman of an important chief was prevented by the intervention of colonial authorities.

In addition to British intervention, Soyinka calls the horseman’s own conviction toward suicide into question, posing a problem that throws off the community’s balance. The play builds upon the true story to focus on the character of Elesin, the King’s Horseman of the title. According to Yoruba tradition, because the horseman’s spirit is essential to helping the chief’s spirit ascend to the afterlife and prevent it from wandering the earth to bring harm to the Yoruba people.

The first half of the play documents the process of this ritual, with the potent, life-loving figure Elesin living out his final day in celebration before the ritual process begins. The breaking of the ritual means the disruption of the cosmic order of the universe and thus the well-being and future of the collectivity is in doubt.

There is use of the Yoruba proverbs in the play. For instance, Elesin himself uses several proverbs in order to convince his peers on the ritual and thus join the ancestors: “The kite makes for wide spaces and the wind creeps up behind its tail; can the kite say less than thank you, the quicker the better?... “The elephant trails no tethering-rope; that king is not yet crowned who will peg an elephant.”

In the play, Soyinka was deeply influenced by Ogun, the Yoruba god of war, which has characterised his works. Above Wole Soyinka’s literary contributions  are immense and timeless. 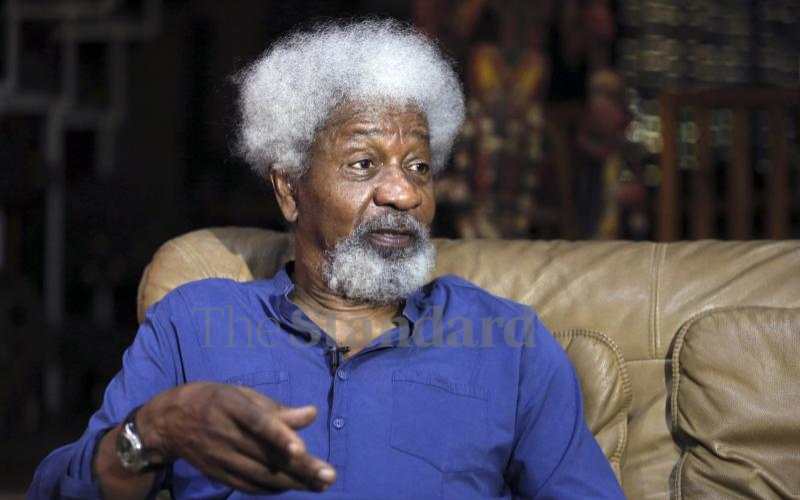