How to spot, manage and treat foot rot disease in your flock

Mary Irungu, a livestock farmer from Kiharu, Murang’a County recently noticed that three of her high producing animals had developed a ‘limping problem’.

Ms Irungu who has kept cattle for years, was able to detect quickly that something wrong as the affected animals were in distress.

“I noticed each of the affected animals had a swollen hoof and were only walking on three feet. Owing to the excruciating pain and discomfort, the animals were experiencing, feeding became a problem,” Irungu says.

Knowing the situation could turn disastrous, the farmer called in a vet and the diagnosis was foot rot disease.

So what is foot rot?

According to Stephen Wagucha, a retired animal health assistant and now a private veterinary practitioner, with intensive systems like zero-grazing becoming the norm among dairy farmers, cases of the disease are also becoming more common.

Wagucha explains that the disease is caused by a bacterium known as Fusobacterium necrophorum that multiplies and thrives under wet conditions.

Farmers ought to be aware of the situations that expose their animals to this disease.

“There is a perception among small scale dairy farmers that sogginess in the dairy unit is good for production of farmyard manure. That maybe a good idea but it is also potentially harmful as animals quickly suffer from foot rot, which in turns affects the entire cow production,” says Wagucha.

How to spot it

So apart from the limping, how else can a farmer detect foot rot?

The basic sign in affected animals is sudden lameness in one or more limbs.

According to Wagucha, other obvious signs include the animal walking with the affected limb off the ground while the limb may be swollen just above the hoof.

He says in most cases, foul smell emanates from the affected part in the limb, with pus oozing in the spaces between the hooves.

The animal does not eat properly because of the throbbing pain.

In sheep and goats, animals with overgrown hooves are the most vulnerable especially if their grazing fields are thorny, rugged and rocky.

In African savanna where most the pastoralist communities raise thousands of small ruminants, cases of foot rot are quite common.

Coupled with little attention paid on the hooves of these animals, limping is a common sign occasioned by the disease.

“This is a common disease in goats and sheep in this region. It is quite common with animals with overgrown hooves and can affect a large number of small ruminants,” says Julius ole Karia, a livestock herder in Sekemani near Maasai Mara National Reserve.

“The good thing is that the signs are always easily spotted by the farmer who then goes ahead and gets treatment for the sick animal before it transmits the infection to the herd,” he notes.

Other factors that can influence susceptibility include foot shape, structure, and age, as younger animals are generally more susceptible.

Researchers at the University of Kentucky point out that some individual animals are genetically more susceptible than others to foot rot.

It is estimated that five to 10 per cent of infected sheep become chronic carriers of foot rot.

While the disease rarely leads to death of the livestock, the economic losses can be considerable as the animals are unable to walk to obtain feed and therefore have poor growth thus low yields.

A recent economic analysis done among farmers in the US estimated that each clinically lame cow costs the dairy producer approximately Sh30, 000.

Surveys indicate that incidence of lameness on dairies varies between 4 and 55 cases per 100 cows per year and is dependent upon farm, location and time of year. Lameness is a costly disease and reducing its incidence will have a favourable impact on dairy profitability. The disease is easily managed even at farm level.

The good news is that foot rot can be treated early with antibiotics while in later stages, surgical intervention such as cutting away the affected tissue may be required.

However prevention is the key to controlling this disease.

Use of chemicals in foot baths- where animals dip their feet as they get to the milking parlor is recommended.

“Use of Magadi Soda or Copper sulphate foot bath in the animal enclosure gates controls the problem,”reveals Wagucha.

While some farmers may want to use herbal concoction, washing the affected limb with magadi soda solution and then applying a paste of Acalypha fruticosa leaves in the affected areas will cure the problem, according to Bernard Wainaina, an organic veterinary consultant.

This according to the consultant, should be repeated once a day for five to seven days.

Other preventive measures of foot rot include maintaining dry conditions inside the animal enclosures as well as isolation of affected animals to prevent the spread of the disease.

Since the bacteria can only live in the hoof of an infected animal or in the soil for no more than ten to 14 days, it is possible, through careful management procedures, to prevent the introduction of foot rot into a flock and to successfully control or eliminate the disease if the flock does become infected.

Additionally, Foot rot can be controlled naturally by breeding for sheep with this natural resistance. A vaccine against the disease is available, although this method of prevention can be expensive.

It provides protection against foot rot for four to six months.

The delayed promise for laptops for Standard One pupils moved a step closer to reality Friday when proposals for tenders to supply the gadgets were opened.

By Feliciah Wanyonyi | 16 minutes ago

By Kendi Ntwiga | 29 minutes ago 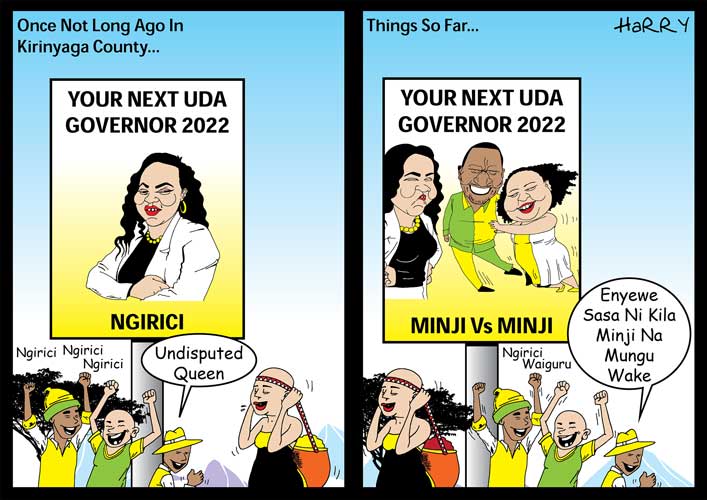 By Harrison Muriuki | 37 minutes ago