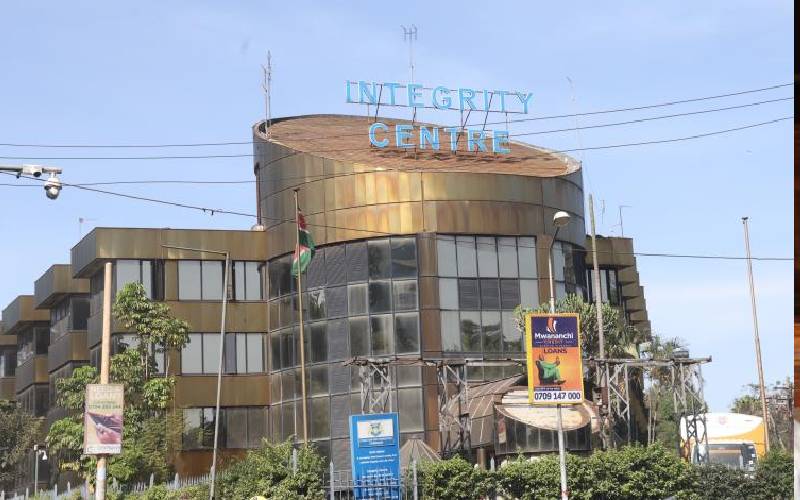 Drama ensued at the Molo Police Station as police officers exchanged blows with the Ethics and Anti-Corruption Commission detectives.

The Friday evening incident happened as the EACC sleuths mounted a sting operation to arrest the OCS over bribery.

As the sleuths stormed the station, they met resistance from several police officers attached to the station as they shielded their boss from being arrested.

The scuffle left five people including four detectives and a complainant who was seeking help over other matters injured.

Nakuru County Deputy Police Commander Joseph Tonui said EACC detectives had set a trap for a senior officer at the police station who was to receive a Sh10,000 bribe from a bar owner.

Mr Tonui told The Standard that the money was 'treated', and when the officer received it, the detectives pounced on her.

“The officer is being held after her arrest on Friday night over corruption allegations. The matter is under investigation by the Ethics and Anti-Corruption Commission which conducted the arrest at Molo Police Station,” said Tonui.

The police boss explained that a complainant informed the EACC about monetary demands made by the senior officer in order to facilitate the release of a suspect.

“The detectives gave the complainant the demanded Sh10,000 which was treated money. The officer received the cash after which the sleuths pounced on her. She was found in possession of the Sh10,000 treated cash and other monies,” he said.

Tonui said the officer immediately called for support from all her juniors present at the station who heeded to her calls.

“The police officers resisted her arrest and instead handcuffed EACC detectives and locked them up in the cells,” he said.

A resident who sought anonymity revealed that he had gone to the station to pay cash bail for her daughter when the drama ensued as he watched from the OB desk.

“It was around 4:30pm when at least five men and two women arrived at the station in two vehicles. Despite identifying themselves as officers from EACC, they met resistance from junior officers who handcuffed and bungled them in the cells,” he said.

According to him, the two vehicles used by the sleuths were chained.

“An officer blew a whistle and we were all ordered to leave the station. My daughter had to spend another night in the cells,” he said.

Mr Tonui said during the scuffle, the officers confiscated cameras and other equipment from the detectives.

“Molo OCPD got the information while away from the station. He rushed back and managed to calm the situation. He talked to the detectives and ordered their release and their equipment given back,” he said.

The police boss said the OCS was later arrested and is now being grilled at the Nakuru Railways police station.

She was held at the Molo station until 9pm when she was moved.

Although it is not yet clear how many detectives were hurt during the sting operation, Tonui said investigations are underway and appropriate action would be taken.

“The detectives on Saturday morning travelled back to the station for an identification parade to identify those who mishandled them,” said Tonui.

This is the second time the officer is on the spot following a June 4, 2021 incident when her house help vanished with Sh320,000 she had kept in a safe in her house.

Although it was alleged that she had lost Sh917,000, the officer maintained that the cash was Sh320,000 which she claimed to be cash bail paid by suspects.

She said she had kept the money at her house as the police station was undergoing refurbishment.

The accused house help identified was arrested days later and presented in court where she pleaded not guilty of stealing the cash and was released on Sh500,000 cash bail.

To join MOMBO SACCO, simply download the MOMBO App from either google play store or Apple Store and follow the easy steps to enrol!

The quiet departure from Bagram Air Base brought an effective end to the longest war in U.S. history.