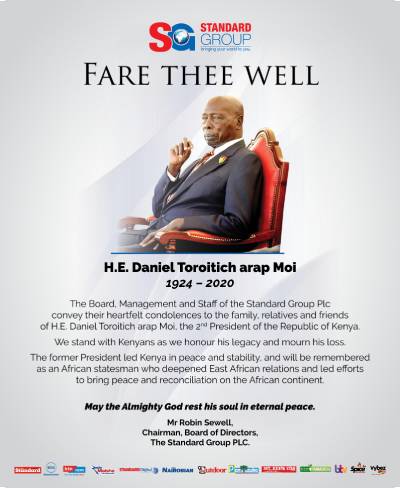 Standard Group Plc has sent condolences to the family of former President Daniel Toroitich arap Moi who died on the morning of Tuesday February 4.

Moi was Kenya’s longest-serving president who served from 1978 to 2002. He died aged 95 at the Nairobi Hospital.

Moi’s death was announced in a presidential proclamation by President Uhuru Kenyatta.

Standard Group and Naivas in deal to promote reading culture

"It is with profound sadness and sorrow that I announce the passing of a Great African Statesman, H.E. Daniel Toroitich arap Moi, the Second President of the Republic of Kenya. His Excellency the Former President passed on at the Nairobi Hospital on the early morning of this 4th February, 2020; in the presence of his family," said President Uhuru.

The Standard Group through Board Chairman Mr Robin Sewell, described Moi as a wise leader who worked tirelessly to unite the country.

“The board, management and staff of the Standard Group Plc convey their heartfelt condolences to the family, relatives and friends of His Excellency Daniel Toroitich arap Moi, the second President of the republic of Kenya,” read the statement.

Mr Sewell further said like other Kenyans, Standard Group joined the family in honouring Moi’s rich legacy and mourning him.

“Mzee Moi led Kenya in peace and stability and will be remembered as an African statesman who deepened East African relations and led efforts to bring peace and reconciliation on the African continent,” Sewell said.

Leaders condole with the Moi family

“You touched many lives and passionately championed peace, love and unity for all Kenyans. May your legacy live through generations to come rest in peace mzee,” said Mr Lyomu.

The legendary fimbo that head of State would never leave behind

By Rashid Lorogoi | 10 hours ago

By Edward Kosut | 21 hours ago