By Allan Mungai | 1w ago 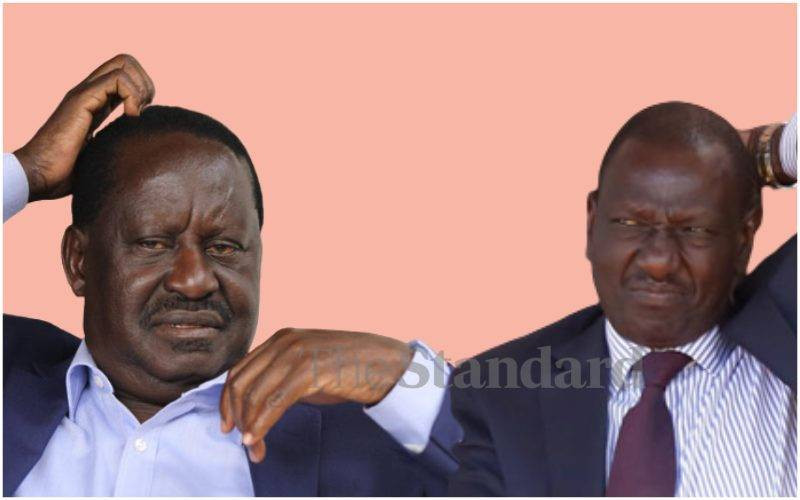 Political campaigns have entered a decisive period with only 48 hours remaining before they close officially and the country heads to the General Election on August 9.

Tomorrow will be the last day for candidates to make their pitch to voters before they stream to the polls to vote for a new president and leaders of five other elective seats. Some 16,098 candidates are battling for 1,592 elective seats.

The past few weeks have been frantic for the two leading presidential candidates Deputy President William Ruto and ODM leader Raila Odinga, who have been rushing from rally to rally hoping to appeal to voters in the final hours of campaigns that started officially in May, but had actually been going on since 2017.

Since then Azimio la Umoja One Kenya presidential candidate Raila and United Democratic Alliance’s Ruto have been trying to sell their vision to Kenyans.

The Azimo presidential candidate yesterday took campaigns to his home turf of Kisumu County and then Luanda in Vihiga County.

The DP and members of Kenya Kwanza Alliance including ANC leader Musalia Mudavadi and Machakos Governor Alfred Mutua were in Makueni yesterday before holding a rally at Tononoka grounds in Mombasa. UDA presidential running mate Rigathi Gachagua was campaigning in Laikipia, Nyeri and Meru counties.

The choice of the venues for final submissions gives a peek into the strategy of Azimio and Kenya Kwanza. Raila visited his Kisumu backyard just days after President Uhuru Kenyatta marshalled support for his State House bid and appealed for a huge turnout on election day.

The president is in Mombasa where the Azimio presidential candidate is expected to hold a campaign rally today. Uhuru is in Mombasa to commission Kipevu Oil Terminal, Liwatoni Fish Processing Plant, Makupa Bridge and Dongo Kundu Phase two.

The final days of the 2022 campaigns have been frantic with accusations and counter accusations bandied around as the water gets murkier.

What is at stake is, however, becoming more apparent by the day as the Independent Electoral and Boundaries Commission (IEBC) dispatches election materials to polling centres across the country and hours fall off the clock.

Raila will address a rally at Tononoka grounds in Mombasa today and close his campaigns with a mega rally at Kasarani, Nairobi tomorrow.

On the other hand, Ruto will be in Kamukunji in Nairobi before making a final pitch to his supporters at Nyayo Stadium.

However, uncertainty hangs over the DP’s final rally in Nairobi.

The DP claimed yesterday that there was an attempt to lock out Kenya Kwanza from venues for meetings.

They were locked out of Bukhungu Stadium in Kakamega on Sunday last week and there were indications of the same happening to his meeting at Tononoka Grounds yesterday.

Ruto has also claimed the government is employing tactics such as locking him out of crucial rally venues to interfere with his campaigns.

“Some people were trying to use the police to stop Kenya Kwanza from having a meeting in Mombasa,” he said. “This is our final rally in Mombasa; an important one and the kind of excuses they give us are ridiculous – that the president is in Mombasa. How ridiculous can it get? You’re saying that if the president is in Mombasa we cannot have a meeting in Tononoka?” Ruto said at his official Karen residence in Nairobi, yesterday.

“It does not matter how many places they lock us out of. We had paid for Nyayo Stadium on Saturday; we have a contract already signed between Nyayo Stadium and us. They tried to manipulate that programme (but) the court has said that we should have that meeting and we are preparing,” he added.

“If they lock us out of Nyayo Stadium we will still have a meeting at Nyayo Stadium, on the road or wherever but we are going to have the meeting anyway because the die is cast and the people of Kenya have made a choice,” he added.

At the same time, Director of Public Prosecutions Noordin Haji has directed Inspector General of Police Hilary Mutyambai to open a probe into the video clip purporting to show Ruto making inciteful remarks at a rally.

There was defiance in Ruto’s voice as he listed last-ditch actions he claimed were being perpetrated by the state to suppress voters in his bases, condition the electorate to a preconceived outcome and whip up ethnic sentiment.

But these final campaign days have not been frantic for Ruto and Raila alone, but also for President Kenyatta who joined Azimio campaigns and played up further the fallout with his deputy.

Even as Raila and Ruto continue with their campaign stops, their digital teams have also ramped up their campaigns popularising their final rallies to be held in Nairobi and encouraging voter turnout.