NASA is no longer part of my future, declares Musalia Mudavadi 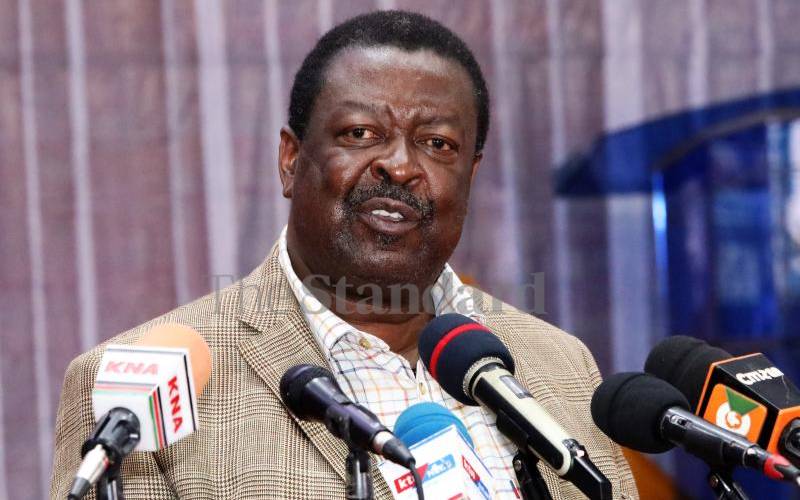 Amani National Congress Party Leader Musalia Mudavadi (pictured) has said NASA is history and is no longer viable for his future political ambitions.

Mudavadi ended his two-day tour of Nyeri County stating that there was no room for going back to NASA as his focus was the future. “Let me state categorically and for the last time, NASA is the past and we are forging forward and looking for new partners who will work together to revive the economy of our country,” he said.

Mudavadi, who was speaking in Endarasha Catholic Church in Kieni Constituency, said he was focused on seeking new alliances to secure the 2022 presidential seat.

“Our country is headed for a transition from President Uhuru Kenyatta's government to a new administration and I am hoping that I will be part of that transition as the next president,” he said.

Mudavadi was hosted by Kieni MP Kanini Kega and Governor Mutahi Kahiga, both of Jubilee party.

The ANC leader, who has been on a tour of Mt Kenya counties in the last two weeks, was accompanied by MPs Ayub Savula (Lugari), Sakwa Buyansi (Nambale), Beatrice Adagala (Vihiga) and Nairobi Senator Johnson Sakaja.

Mudavadi called on the Church to hold politicians to account and offer leadership direction to the people.

He made a clarion call for a united and peaceful country ahead of 2022 General Election.

“We come in peace and all we need is peace for the economic prosperity of our country,” said Mudavadi.

Ndaragwa MP Jeremiah Kioni said the country was heading to a tricky political campaigns season. “We need peaceful leaders like Musalia. I was his running mate in 2013 and this country can benefit from his leadership, both politically and economically,” Kioni stated. Savula said ANC had a presidential candidate ready to take up office.

“What we are looking for is a good working relationship with the Mt Kenya region,” Savula noted.

Bunyasi said ANC was working towards an economy that supports all Kenyans and the region was the centre of entrepreneurship in the country.

Missing in action not music to Rudisha's ears

A historic world record win during Olympics in London in 2012 and a spectacular defense of his title in the...

By Stephen Nzioka and Julius Chepkwony | 18 hours ago