Raila: I will declare my stand on 2022 at the right time 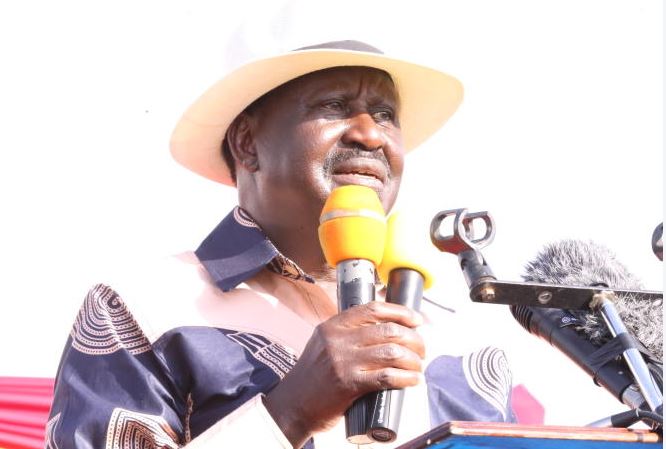 ODM leader Raila Odinga (pictured) yesterday sought to quell pressure to declare whether he will vie for presidency for the fifth time next year or not, saying he will only make the announcement after dispensing with the Building Bridges Initiative (BBI).

Raila, whose ODM party extended the deadline for applicants seeking to fly the party’s flag from yesterday to March 31, has kept his supporters and opponents guessing whether he will vie or not.

Speaking in Ugunja, Siaya County, when he commissioned a Sh45 million Kenya Medical Training College, Raila told the media to stop pushing him to state his stand.

“I will make a declaration in broad daylight. Do not make it for me. Do not force me to make a statement when I am not ready,” Raila said.

His allies led by former Gem MP Jakoyo Midiwo, however, urged him to seek to occupy the House on the Hill.

Mr Midiwo said some people were nudging Raila not to view for presidency yet they had no agenda for the country other than greed for power.

“Baba, we will respect your wish to vie or not, but we will not allow you also to quit the political stage without our consent. You can’t fail to run. Whom will you leave us to?” asked Midiwo.

But Raila went on: “I have never said I will contest and a section of the media keeps speculating. They write that “he has hinted”...I want to tell the media that they will not force me or intimidate me into declaring my what I am up to in 2022.”

Raila, who has indicated he will not endorse any of his National Super Alliance top guns for the presidency, said: “Until then (after BBI), I will not declare the seat I am going for and so let the media stop pushing me or second-guessing my next political course.”

Despite his sentiments, political pundits regard Raila as a top contender for the presidency in next year’s polls, even as his party seeks to strengthen itself.

Raila handlers are also said to have acquired helicopters ready for battle for State House.

On Wednesday, the former prime minister, who has been rebuilding his political networks including recently meeting former United Nations Conference on Trade and Development (Unctad) boss Mukhisa Kituyi and Makueni Governor Kivutha Kibwana, talked about how the youth will benefit from his leadership if he ascends to power.

Yesterday, he expressed confidence National Assembly and Senate will pass the BBI Bill due to the huge backing him and President Uhuru Kenyatta enjoy in Parliament.

In an apparent reference to Deputy President William Ruto, Raila said: “Just like the team opposing BBI is in Parliament, my team is also there and I know we will win.”

“After we are done with the House, we will come to the people and we know we will win (at referendum),” he said.

On Thursday, Raila, Uhuru and other top political leaders backing BBI met at State House, further fuelling speculation that the group could be planning a coalition to take power in 2022.

Raila earlier yesterday attended the funeral of Bonchari MP John Oroo Oyioka in Kisii County where he said it is Kenyans who will decide if he will be president.

The two were captured on CCTV footage driving in the woman’s car on February 12 when she was reported missing.

By Special Correspondent | 17 hours ago

By Brian Otieno | 23 hours ago

By Jacob Ngetich and Moses Nyamori | 23 hours ago