?The revelations by Mombasa Governor and ODM deputy party leader Ali Hassan Joho that he could be aiming lower than the presidency has opened the lid on the harsh realities confronting second-term governors.

After running the affairs of their respective counties for 10 years, seeing devolution through its teething problems and creating solid political fiefdoms, 21 governors face uncertain future and have to make hard decisions, just like as Joho, to remain relevant.

Whatever plans they have could be shaken by many uncertainties obtaining, like the Building Bridges Initiative (BBI), and other factors. As they usher in the New Year, they will have to make resolutions on what to go for.

A good number of them have declared interest in the presidency, either for real or to raise their stakes, while others have kept off the debate as many more brood over the same. The prospects of one becoming a prime minister are beginning to open them to ideas of running for parliamentary seats.

But to get the prime minister position, one has to first contest for a parliamentary seat before being appointed by the president, according to the draft Bill that is being spearheaded by President Uhuru Kenyatta and ODM leader Raila Odinga.

But the announcement by Joho might jolt the undecided to make clearer their plans lest they miss out spoils of the first charge.

“I have laid ground as the governor of Mombasa and I think I can vie in any constituency and win. Tell some of your friends that they will eat the dust,” he said.

In Lower Eastern, governors Alfred Mutua (Machakos) and Kivutha Kibwana (Makueni) will be exiting as well. In Central Eastern, Martin Wambora (Embu) will be leaving.

In Central, only Mwangi wa Iria (Murang’a) will be retiring.

In Luo Nyanza, Cornel Rasanga (Siaya), Okoth Obado (Migori) and Cyprian Awiti (Homa Bay) while in Western Wycliffe Oparanya (Kakamega) and in Kisii-Nyanza governor James Ongwae will not be coming back. In North Eastern, Ali Roba (Mandera) will be exiting as well. 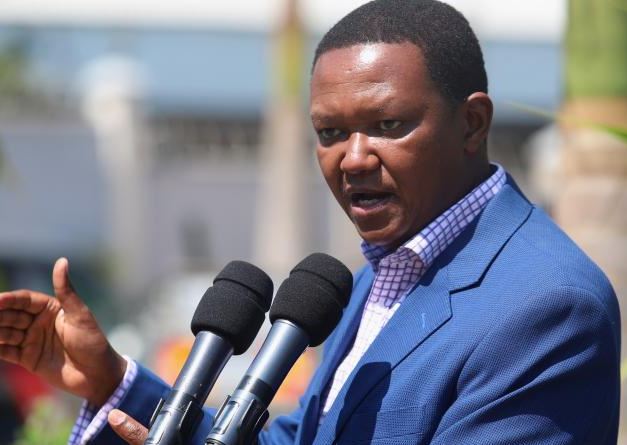 Mutua (pictured above) and Kibwana have both declared that they will be running for the presidency.

Yesterday, Mutua said he was determined to gun for the top seat and would not be backing off. He said he had looked at the political landscape and noticed that Kenyan’s are desirous of real change.

“The current crop of leaders do not have anything to offer a dynamic Kenya. My plan is to reboot the Kenya way of life so that people can get the quality of life they deserve. Power is not given, it is taken and I will be on the ballot in 2022 running to be the fifth president of Kenya,” Mutua told The Standard yesterday.

Oparanya, the current Council of Governors chair, has been blowing hot and cold on the presidential ticket. He has on many occasions challenged ODM leader Raila Odinga to support his ambition.

“Mulembe Nation has supported Raila in the 2007, 2013 and 2017 presidential elections wholeheartedly. I want him to rally his people behind me come 2022,” Oparanya said at Nambirima market in Lugari Sub-County in April 2018.

Current MP Tindi Mwale of ANC would have to fight to beat the governor should he choose to go for the seat. Mwale has agreed to allow Oparanya to vie for the seat in 2022 if the BBI report provides that for one to become prime minister or deputy prime minister must be an elected MP.

In August, this year, Ojaamong told a funds drive at St Teresa of Avila Kwangamoru Church that he was too young to retire and he still wants to serve the people in a more senior position than the governorship.

He declared his intentions to contest Teso South parliamentary seat to boost his chances of being appointed as prime minister or one of the two deputies as proposed in the draft Constitutional Amendment Bill.

Ojaamong previously served as MP for Amagoro Constituency for two terms between 2002 and 2013.

Close allies of Tunai say he may be going for the Narok Senate seat.

“That one you can take to the bank,” said an MP from the region, who did not want to be named because he might be seen as betraying the trust Tunai has in him.

Tunai who hails from the minority Siria clan of the Maasai trounced the candidates fronted by the populous Purko clan twice in 2013 and 2017. Tunai recently indicated that he will be working with his former rival, now Labour CAS Patrick Ntutu and Purko clan.

Kericho’s Prof Chepkwony has on more than one occasion hinted that he will be gunning for the Senate in the 2022 General Election.

In the governor’s arithmetic, he will swap seats with Kericho Senator Aaron Cheruiyot who is believed to have an interest in the seat after Chepkwony’s exit.

“Cheruiyot is a friend of mine and is a gentleman. Come 2022, we are going to enter into talks and switch seats. He can gun for the governor’s seat after my term and I can also go for Senate,” said Chepkwony.

In North Rift region, all the four governors serving their second and final term have been cautious about making public their intentions. Interviews with their close allies and advisors revealed they want to align themselves either with the deputy president or Baringo Senator Gideon Moi.

Governor Tolgos has been coalescing around Senator Gideon, who has been pushing for constitutional changes to restructure the national government.

“My focus at the moment is to push and ensure BBI sails through. After that, I can look at the options that come up,” said Tolgos who chairs BBI in the Rift Valley region.

He said he was positioning himself adequately but that “depending on the outcome of BBI, I may choose to gun for the Senate to go and support devolution and ensure Kenyans enjoy service delivery. I may also opt to serve Kenyans outside elective position by lobbying for a post in the national government.”

The governors’ strategy to angle for other elective seats after completing their term of office, is well understood by looking at what happened to some of the inaugural county chiefs who lost in the 2017 General Election.

After the polls, some of those who lost were appointed to the Cabinet as a soft landing. Peter Munya, the former Meru governor is now serving as Cabinet Secretary for Agriculture while former Marsabit Governor Ukuru Yattani is the National Treasury CS.

In Central Kenya, Wambora is yet to decide his next move but was confident that he will serve in the next government. Mr Wambora says, as a veteran politician, he will make the announcement at the right time.

But his counterpart Wa Iria is clear that he is headed for bigger things through his Civic Renewal Party.

“Am not going anywhere as I have a party that will put me in the national politics to bargain for my people to get the best,” said Mwangi.

In Siaya, Rasanga is reportedly building a campaign war chest with an eye for Alego Usonga parliamentary seat, with insiders saying it’s a well-settled matter. For the better part of the year, his political and development initiatives in Alego Usonga have raised eyebrows and he has also held several meetings in the constituency with ODM delegates from all the wards in Alego Usonga

Rasanga’s forays have resulted in a cold relationship with current MP Samuel Atandi with whom they traded barbs early this year. He had initially declared interest to vie for the Senate seat currently held by James Orengo in 2022 but backed off when Oburu Odinga declared interest for the same seat.

Understanding your children as human beings will allow you to develop a healthy relationship with them.