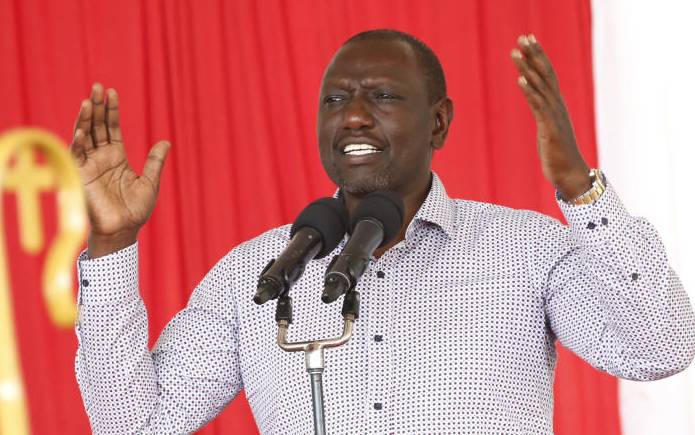 Deputy President William Ruto (pictured above) has called on state officers across various cadres to priotise achieving objectives of Big Four Agenda before engaging in politics.

DP Ruto who attended a prayer service at ACK Church in Athi River, Machakos County, accused some leaders he did not mention of abandoning their responsibility and delving in early politics.

“We who have been elected or appointed into various positions in the Jubilee government should strive to achieve the Big Four Agenda before engaging in politics…We need to achieve what we promised Kenyans in our manifesto. There is no need for chest-thumping and politicking at this time,” the DP said.

He said the country’s economy was tattered as a result of Covid-19 and many Kenyans had lost jobs. Therefore, the government and the leaders ought to work hard to ensure that jobs lost are re-created. The church was commemorating the seventh anniversary for the establishment of a diocese as the clergy submitted reports for various fundraisers to implement church projects.

The DP’s statement comes at a time that various cabinet secretaries are under the spotlight for engaging in politics at the behest of the law which bars them from such activity.

The Sunday Standard in an exclusive feature reported emerging trend where Interior Cabinet Secretary Dr Fred Matiang’i, alongside his colleagues in the Cabinet, have been touring the country inspecting development projects.

Matiang’i has also been touted as one of the possible presidential candidates in the 2022 General Election.

The other CSs who have been making development tours are Keriako Tobiko (Forestry and Environment), Joe Mucheru (ICT), George Magoha (Education), Eugene Wamalwa (Devolution) and the latest on the group is Mutahi Kagwe of Health.

Some CSs have shown no intention of keeping their political inclination secret. Those allied to President Uhuru Kenyatta have come out in the open to defend him against the criticism from the Tanga Tanga political divide, which is pro-DP Ruto.

Recently, Forestry and Environment CS Keriako Tobiko engaged in an ugly spat with Elgeyo Marakwet Senator Kipchumba Murkomen, who he accused of disrespecting the head of state.

Speaking at Loita forest in Narok County, the furious Tobiko said: “Murkomen needs to have respect. He is out here insulting President Uhuru Kenyatta and other leaders. He should respect the President. If you don’t respect the president of the Republic of Kenya, you do not deserve to be respected by anyone.”

He would follow this with a rather controversial statement aiming a dig at the deputy president.

“Deputy president is a clerk. An assistant to the president,” he said.

Tobiko had responded to a reply by the Elgeyo Marakwet legislator in which the latter had labelled him a non-performer during his stint as the Director of Public Prosecutions (DPP).

Murkomen challenged him to try winning an electoral seat before taking him and the DP head on matters of politics.

“Mr Tobiko you are a mere clerk in Jubilee government. You forget so fast that you became a CS because the President was trying to get rid of you from the office of DPP. You have no moral authority to lecture your boss the DP even if he is being molested by his boss. First, try to be MCA,” Murkomen tweeted.