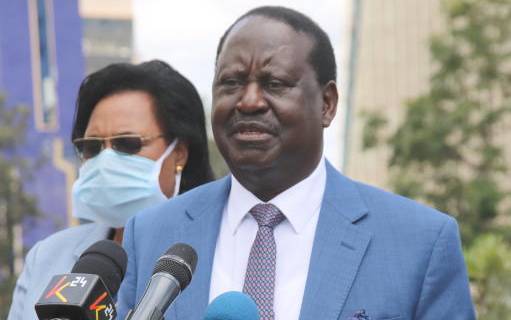 ODM leader Raila Odinga (pictured above) arrived back in Nairobi on Sunday after a three-week medical trip to Dubai where he underwent minor hip surgery. Odinga and his entourage arrived at Jomo Kenyatta International Airport aboard a luxurious Constellation Aviation Airline Airbus A318 and headed to the  Presidential Pavilion  His handlers said he did not want his arrival to attract any form of crowds hence the low-key return at about 9.30 pm.

SEE ALSO: How MP hid behind fate of ex-legislators to earn a fortune

He was picked up from the Presidential Pavilion and driven to his residence. “The PM did not want his return to cause drama hence the timing and low-key events at the airport. He is fine and resting at home,” said an insider. A flight-tracking system of the private jet that has a capacity of 19 passengers showed it left the Al Maktoum International Airport in Dubai at 5 pm and landed at JKIA at about 9.30 pm and docked at the Presidential Pavilion. Even though it was scheduled for a trip to Lusaka, Zambia it did not leave Nairobi immediately. The plane had on Thursday taken ODM deputy party leader and Mombasa Governor Hassan Joho and minority whip Junet Mohamed to Dubai. It was en-route Dubai from Zambia when it made a stop at JKIA and picked the two together with Mombasa County Assembly Speaker Ibrahim Khatri. There were reports the three were connected by a friend to the flight to Dubai but it is not clear who footed the bill.

The three together with Odinga’s handlers flew back in the same jet on Sunday, officials said.  The operators of the jet are based in the United Arab Emirates and operate a modern, state of the art medium and long-range fleet aircraft. While in Dubai, his wife Ida said the decision to airlift the ODM leader was to give him enough time to recover without interruption from family and guests. He had flown from Wilson Airport in a low key event. "Had he been here, many people would be flocking the home to see him. Each visitor always wants at least to talk to him thus eating away into his recovery time," she stated. She said Odinga was attended at a Dubai-based International Hospital run by Germans and had been successfully treated of a mild nerve disorder affecting one leg. The doctors at the hospital had recommended some time for him to recover.

"You know that currently there are no commercial flights. This means that if he is to come back, we have to charter a plane, but that process will be kicked off once he fully recovers," she stated. Dismissing reports on his condition being critical, Ida said the AU Special Envoy was recovering following treatment in the foreign country. She further stated that Raila was doing better adding that she stayed in contact with him on an hourly basis before and after the minor operation. On July 1, Odinga said he was feeling better after the operation and thanked those who had wished him well. “I’m feeling great and let me thank everyone who sent me messages of goodwill. Asante, Asante, Asante Sana,” he said in a tweet. His being away has apparently delayed the planned handing over of the Building Bridges Initiative (BBI) report by a task force that has been collecting public views. The team completed their mandate on June 30. Officials said the plans will now go on and that the former PM had been briefed on the progress and is ready for any such events as at when needed.