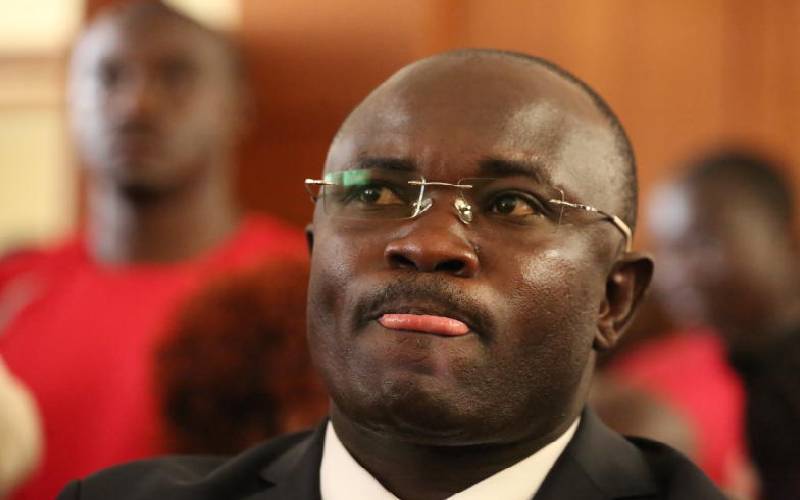 Ugenya MP David Ochieng has dismissed as illegal his purported removal from the National Assembly Health Committee by NASA saying he is not a member of the coalition.

Ochieng (pictured) who was elected on Movement for Growth and Democracy Party told NASA and ODM to stop forcing him into their coalition yet he is in his party.

“NASA cannot take any disciplinary action against me because I am not their member. There is no basis whatsoever, either by law or fact, to even associate me with the coalition,” he said.

Speaking during an interview KTN TV, the MP accused his political detractors in ODM of plotting to paint him as anti-ODM leader Raila Odinga and President Uhuru Kenyatta to for political reasons but warned that he will not take it lying down.

“People are trying to paint me as an anti-President Uhuru Kenyatta and Raila Odinga, but I won’t allow them, I will fight back,” said the MP.

The legislator said as a member of the Movement for Growth and Democracy Party, he has got nothing to do with NASA or Jubilee.

“As a member of Movement for Growth and Democracy Party, I don’t caucus with NASA or Jubilee Party.”

Ochieng told the Orange party off, saying when they wanted to join NASA as a party during the Ugenya by-election, he was branded a Jubilee mole, saying he is not aware when he changed from being a mole to NASA member.

“We tried to affiliate ourselves with NASA in the two elections, but some people in ODM refused, and the situation has never changed,” he said.

He said attempts to associate him with Deputy President William Ruto flopped during the by-election and will still flop.

Ochieng was allegedly de whipped by NASA as Health Committee member in the National Assembly for being pro DP Ruto among other MPs.

In the changes announced by Minority Whip Junet Mohammed, MPs allied to Ruto have been dewhipped from House committees for going against the party.

Also on the chopping board is Malindi MP Aisha Jumwa, she survived previous attempts by ODM to remove her from Parliamentary Service Commission but with the new alliance between ODM and Jubilee Kieleweke wing, she could be ousted.

Africa’s most industrialised economy has been largely shut since a nationwide lockdown began in late March.

By Fidelis Kabunyi | 12 hours ago