William Ruto win historic, we can dream big with promise of a new order

By Aden Duale | 4mos ago

On September 13, Kenya begins a new phase as President William Ruto and his deputy Rigathi Gachagua take the reins of power in a historic event at Moi Sports Centre, Kasarani, witnessed by an ecstatic world.

The two Kenya Kwanza leaders will be taking the oath of office at a time the country is beaming with high expectations. Citizens are reeling from teething challenges like deep divisions and the skyrocketing cost of living.

Whichever way you look it, Ruto’s accession of power is a historic feat. He defied odds against every expectation to rise to the highest political office in the land in a process that goes ahead to prove the buoyance of our democracy.

Indeed, change has come to our beloved republic. Philosophers say that one constant thing in life is change. But the change in itself should deliver outcomes that do not compromise public good. The change that Kenya Kwanza envisages will undoubtedly add value to the reforms journey.

Indian Yoga guru BKS Iyenga once argued that change is not something we should fear. Rather, we should embrace it because without it, nothing ever grows or blossoms, and no country would ever move forward to become what they are meant to be.

The late Prof George Saitoti had a powerful philosophy on nationalism. He said there comes a time when the interest of the country supersedes that of an individual. The thrust of Saitoti’s philosophy was that Kenya is bigger and important than any single individual.

On August 9, we went to the polls and against all odds. Voters overwhelmingly put their trust in Ruto and the Kenya Kwanza alliance. Having clinched the prize, Kenya Kwanza also won itself the speakers’ slots in the bicameral Parliament last week. Wanjiku has won big time.

Indeed, Ruto’s political journey does prove that any Kenyan, irrespective of their background, can lead and without diversions address the core needs of our beloved people. In him, there is hope that even leaders from minority groups and diverse regions can occupy higher echelons of power. Granted, power belongs to the people. They decide who to entrust with it.

We have broken away from the old order at last. By the deed of his own words, Ruto and his troops will focus on inclusivity and equity so that every Kenyan will be included in the affairs of government and the country. Ruto will deliver us from the shackles of political and economic entitlement by the privileged few. We bear no grudges. There’s no time to ‘revisit’ our detractors. They have no reason to panic. Our hands are full with the task of nation-building.

Kenya Kwanza doesn’t take Kenyans’ trust for granted. Being a seasoned democrat and now serving my fourth uninterrupted term as a legislator, I am convinced that the future is bright. With a versatile Executive, an independent Judiciary and a vibrant 13th Parliament, Kenya will be the most robust and progressive country in history.

In the Kenya Kwanza family, we have unanimously agreed that as echoed by the 16th President of the US, Sir Abraham Lincoln, ours will be the, ‘government of the people, by the people, for the people.’ The plan to unify our country and put our nation Kenya, kwanza begins. All Kenyans of goodwill, including the opposition, should come onboard. The task ahead is critical.

Long live our progressive Constitution that defends itself and the people. Gone are the days when persons in power would abuse the powers bestowed on them and invoke brute force for self-preservation. No more rule by fiat, strong man tactics and circumventing the law for patronage and cronyism. The rule of law has prevailed.

Levelling the political and economic playing field has never been more essential. A Ruto leadership, without a doubt, is a representation of hope, peace, inclusivity, economic prosperity and higher chance a stronger nationhood. In him lies the hopes of millions of Kenyans who have been victims of serious economic inequalities.

With a promise to reduce the cost of living, implement the Hustler fund, reorganise government to reflect the needs of the country and tackle endemic corruption, we are on the road to saying goodbye to some of Kenya’s age-old challenges that stand in the way of growth.

All these plans are doable with the right effort, investment and goodwill. The new President, himself a committed worker, has the zeal to ensure a rebirth of the country. His scorecard when he was Agriculture and Higher Education minister is unmatched, and Kenyans will recall reforms he instituted.

As he takes office tomorrow, he will use the same zeal to revolutionise the economy through the bottom-up model. The lower income groups and indeed every Kenyan will have a stake in the economy.

A country is not just about the rich and the powerful. Real work starts after Tuesday next week. We have every reason to dream big with a Ruto presidency. 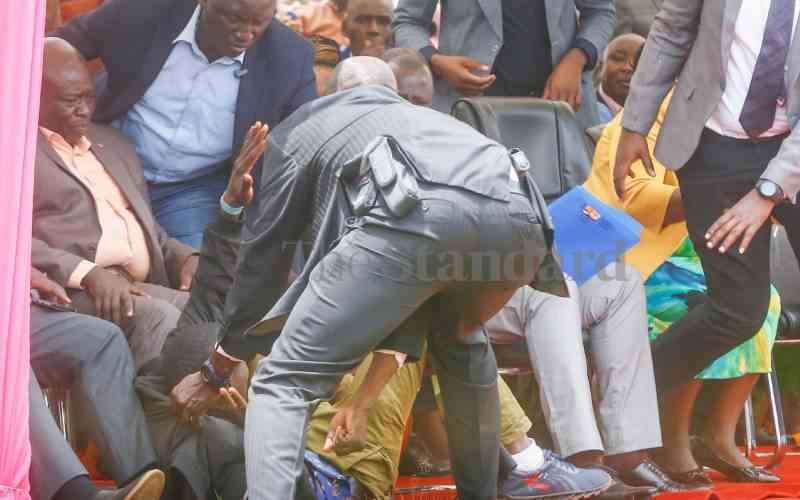 By Peter Kimani 4 hrs ago
Premium Raila of old returns to Kamukunji, and he's singing a not-so-new song of redemption