Why Russian sanctions should spare Africa

By Mathews Ocharo | 7mos ago

When Russia invaded Ukraine on February 24, the world economic systems reacted and wiped out nearly $1 trillion off the value of the global stock market accelerating a drop in the major indexes

Africa, already with a weak economy exacerbated by the pandemic was not ready for a war involving two important producers of major commodities.

In Kenya, we have seen in the past week large queues at petrol stations due to the supply chain disruption and extenuating Covid-19 circumstances.

Russia being the world’s second-largest crude producer, providing around 35 per cent of Europe's and 50 per cent of Germany's natural gas supply, would automatically affect world oil prices.

As of 2020, Nigeria was the leading oil producer in Africa amounting to 86.9 million metric tons. Unfortunately, this oil is mostly exported to Asia and Europe as crude, and they import the same externally when refined.

This is a sad state of affairs as most African countries lack the capacity to refine the oil before exporting it to give it that added value that would yield bigger profits.

The control of oil mining in Africa by big multinational companies makes it difficult to purchase the product directly from them. Furthermore, the lack of oil refineries to process the raw material makes the situation worse.

Ethiopia is one of the few African countries that imports its petroleum products directly from Africa.

It spends 50 per cent of its total export earnings to meet its fuel demand saving millions of dollars by importing from neighbouring Sudan through Sudan’s Nile Petroleum Company (NPC.)

On the brighter side, large quantities of oil and gas were discovered in 2006, around Lake Albert in western Uganda. This raised hopes that the East African region would benefit from cheap petroleum products once the project was fully operational

But the East African countries will not enjoy the full benefit of cheap oil unless a refinery is established in the region.

Estimates show that Uganda has 6.5 billion barrels of oil reserves. Unfortunately, only 1.4 billion are economically recoverable.

Locally Uganda has the capacity to produce 230,000 barrels per day (bpd) for over 15 years, with the potential to maintain East Africa’s supply of petroleum products.

But the construction of the crude oil pipeline connecting future oilfields in Uganda to the Tanzanian port city of Tanga is a clear manifestation that is will not be the case.

Experts say that the viability of the project will not warrant the construction of a refinery.

Even though the harsh sanctions imposed on Russia by Western nations do not specifically target its oil and gas, the supply chain has been disrupted as top buyers struggle to secure guarantees and find tankers to take the crude oil to Africa.

Also, the high cost of insurance for oil cargo from Russia is part of the problem. This has created speculation, hoarding and panic purchases contributing to the creation of an erratic supply and demand curve.

Europe receives its crude oil from Russia through pipeline which is less conspicuous than shipment, making big energy firms fear public backlash because purchasing oil from Russia will be seen as supporting the war in Ukraine.

They also face logistical issues as banks cut credit and difficulty obtaining insurance on top of the soaring freight costs. Conversely, China and India have taken advantage of the cheap price of oil offered by Russia to stockpile.

Conversely, it’s high time African countries take advantage of this scenario. it’s not that African countries don’t empathise with the Ukrainian s, but just like Europe which did not impose sanctions on oil due to strategic economic reasons, Africa should equally insulate itself from the future prize volatility because we don’t know how long this war is going to last.

In Kenya, the Treasury Cabinet Secretary Ukur Yatani has warned the public that the fuel subsidy programme cannot be sustainable, and the government must come up with a different strategy. Yatani said that the subsidy programme in future will need between Sh10 billion and Sh15 billion more every month to keep the prices stable.

African countries should therefore be proactive as opposed to being reactive in readiness for foreseeable crises and one way to do this is to have policies through the African Union to source fuel from within the continent.

Wheat and corn oil are other products that have been impacted by the war in Ukraine. We have seen that since January the prices of wheat and cooking oil have been on the increase due to the Covid situation and are now made worse with the latest catastrophe.

The continent’s largest sources of wheat are Russia, France, and Ukraine. Concerto, an African economic intelligence firm estimates that Russia and Ukraine imports account for 30 per cent of all African wheat consumption, while Egypt imports about 80 per cent from the two countries.

Kenya also imports large quantities of wheat from Russia and Ukraine, which is why we have seen the prices going up in the local market.

A report by the German publication Der Spiegel, according to Paloma Fernandes of the Central Millers Association in Kenya, warned that prices of wheat products will start to rise from March this year.

Just like how European countries have ensured that they have insulated their citizens from fuel issues (but for the latest sanctions imposed on coal from Russia which will easily be compensated by gas), they should also allow ships from Russia to bring Wheat and corn to Africa.

They should declare in the European Union Parliament and the UN that wheat is an essential commodity for social and political security, therefore shipments should be given all the necessary support to export the commodity to Africa. 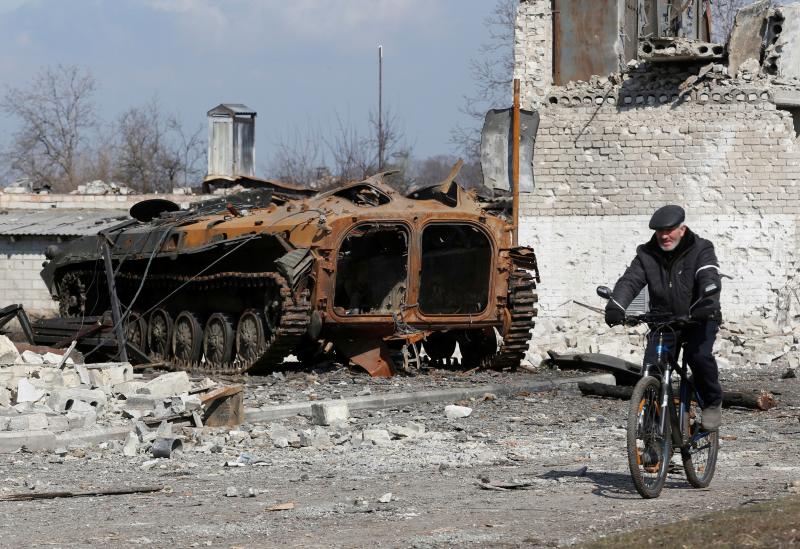 Ukraine accuses Russia of war crimes after bodies found bound, shot
Ukrainian authorities were investigating possible war crimes by Russia after finding hundreds of bodies, some bound and shot at close range, strewn around towns near Kyiv.
Europe
By Reuters
8 months ago
.

By Mactilda Mbenywe 5 mins ago
Abuse nature, it abuses you back in kind
.