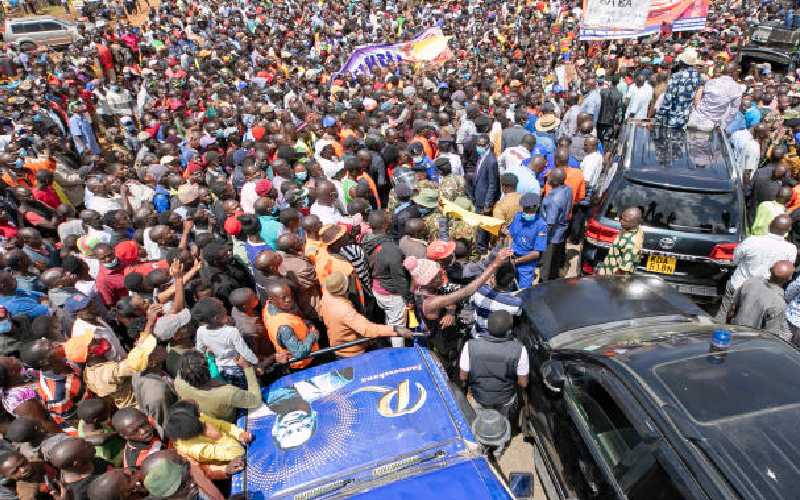 Between now and August next year, we will be treated to hundreds of political rallies as Kenyans seek political office. All these Kenyans will promise development, jobs, security and more. As they campaign, they will exalt their ability to deliver.

We will either cheer or jeer them. We should however not get carried away by public euphoria. No wonder the Independent Electoral and Boundaries Commission (IEBC) has termed early 2022 campaigns undesirable and urged politicians to slow down.

Irrespective of who is in office, there are five things we must demand from every elected leader for our country to break free from the chains chocking our unity and growth.

The first thing elected leaders must deal with decisively is corruption. Although I have discussed corruption in my previous columns, some occurrences last week showed us how we can uproot the vice.

When three convicted terrorists escaped from Kamiti, the President fired Wycliffe Ogallo, the Commissioner-General of the Kenya Prison Service. Thereafter, officers from the Anti-Terror Police Unit (ATPU) speedily arrested him, alongside the Kamiti Maximum Prison head Charles Mutembei and his deputy. Less than 24 hours later, the three terrorists were arrested in Kitui and airlifted to Nairobi.

This incident provides a template that top elected leaders must lead by example in dealing with graft. Just as the electorate will hold them accountable, they must also hold top leaders of government and corporate institutions accountable.

In this Kamiti saga, arresting top leaders will be more effective than sacking a few low-level prison wardens. Leaders are the ones who are charged with full responsibility and must therefore be held accountable for any failures under their watch. This must be the new norm in every single government institution.

Secondly, the electorate must demand the extermination of the rampant impunity for justice and development to prevail. Impunity fosters corruption and there is a direct link between the rule of law and development. As reported, we lose one third of our State Budget to corruption every year.

Considering that the 2021 budget was worth Sh3 trillion, it is possible that during the current financial year, corruption will snatch away Sh1 trillion. Why should we lose even one coin to corruption when some of our children in rural areas are studying in ramshackle?

Thirdly, we must systematically tackle negative ethnicity. We must never forget how more than one million people died in the Rwandan genocide; how largely ethnically fueled clashes killed an estimated 500,000 people in South Sudan; how Somalia’s long-running Civil War that is partly clan-based, has killed thousands; how Kenya’s own 2008 post-election violence left more than 1,300 Kenyans dead. These figures remind us that negative ethnicity is always a bomb waiting to explode. Any leader whose words or actions fuel negative ethnicity must not be tolerated.

Fourthly, we must demonstrate civility. The lack of social order in a society leads to confusion while its presence attracts tangible sustainable development. The rule of law and civility therefore must prevail at all times. This applies to every Kenyan.

When a pedestrian ignores a footbridge and sprints across the road, he is blatantly ignoring law and order. This can easily result in loss of time, money and life. According to the 2020 ease of doing business ranking, only two sub-Saharan African countries made it to the top 50. This proves that law and order have a direct correlation to investment.

Finally, I suggest we entrench the spirit of Ubuntu into our national operations and systems. Ubuntu is an African philosophy which dictates that ‘I am because we are.’ We are one nation, one people and must take care of one another, not pull each other down. This is the metric that we must use to measure not just our leaders, but also ourselves. Think green, act green.

There are cultures where people take personal responsibility for failures, and leaders step aside even for what we would consider frivolous reason.

Raila and Ruto are too confident; that’s a recipe for trouble

By Suleiman Bashir Salah | 2 hours ago

Hate speech is audible amid the din of intensifying campaigns

By Chege Ngugi | 2 hours ago

By Githieya Kimari | 2 hours ago

Run for your lives; the season of empty political promises is here
;
Feedback