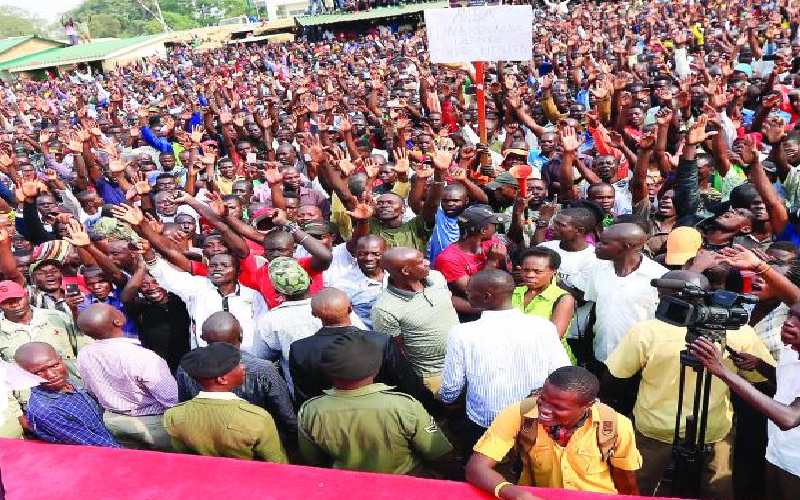 The striking hallmark of a populist politician is a constant repetition of divisive phrases and harsh words. He or she cynically exploits fear to appeal to the darker corners of the public psyche.

He or she dismisses mutual respect and human dignity as only so much “political correctness”, brings forth an eruption of latent anger, prejudice, hate and misogyny. He leads to a struggling population in search of easy answers.

These problems are implicit in a democracy. Here, the Roman experience offers a quintessential case study. By the first century BC, for instance, the Roman Republic had endured for four centuries and ruled over millions of people around the shores of the Mediterranean.

Although it was far from a perfect democracy, the citizens of Rome had a real voice in their government in contrast to the kingdoms and autocratic empires elsewhere in the ancient world. But times were hard.

Why the Education Cabinet Secretary Dr. Fred Matiang’i is ‘killing’ the education system in Kenya

Decades of an economic downslide, threats from the Middle East, and political infighting had left the Roman people weary of the plodding nature of their government.

They were ripe for someone to take the reins of power and shake up the business-as-usual attitude of their Senate. Julius Caesar was a charismatic and unconventional populist politician who knew what the masses wanted to hear. He used his immense wealth to ride the foul wave to the highest ranks of political power.

The old guard politicians of Rome were horrified at his rise and did everything they could to stop him, but nothing worked. The more the establishment spoke against him, the more common people loved him. And so the masses cheered when Caesar crossed the Rubicon River in 49 BC and swept away the career politicians.

Although he shook things up, it wasn’t long before he proclaimed himself dictator for life. He was killed on the Ides of March in 44 BC. But by then it was too late. The structures of republican government had been laid waste and the voice of the people was silenced for the rest of the Roman Empire.

But today, among political scientists and historians, the question as to whether there’s a correlation between the society’s moral and intellectual decline and the rise of populism is triggering a hair-splitting debate. Certainly, there is a strong link between the two.

Contemporary education, the argument goes, puts emphasis on passing tests and a student’s employment prospects instead of teaching critical thinking and analytical skills. If we are not taught to question what we hear, perhaps populism becomes more attractive.

The support base of the two biggest recent populist shocks – the election of Donald Trump and the UK’s Brexit vote – exemplified a strong correlation.

In 2016, the higher the percentage of people in a US county whose highest level of education was high school, the greater the swing towards Donald Trump in US presidential election, relative to Republican support in 2012.

As the Financial Times pointed out, even when a host of other factors were considered such as income levels, income growth, unemployment, race, age and immigration, none was as good a match for the shift to Trump as education.

In the UK, an analysis of those who voted Leave in June 2016’s Brexit referendum revealed that in local authority areas, the lower the share of people with a degree, the higher its share of the vote to leave the EU.

Yet, despite the long tradition of democratic citizenship education from the early 20th century, populism has not raised much interest among recent educational researchers.

The very few studies on emotional underpinnings of political behaviour have particularly been attributed to the influence of the rational choice paradigm and the Enlightenment’s legacy of the prevalence of reason over emotion.

Feelings and emotions have long been viewed as something that interferes with political decision making rather than being an integral part of information processing.

But does emotion have a role in understanding political calculi? Usually, political scientists agree that political views and actions are not the product of meticulous processing of information and balancing of advantages and disadvantages.

Populist movements are an expression of certain negative sentiments and reactions.

Fear, for instance, has been widely used by populist leaders in order to legitimise their policy proposals and offer simple answers to this fear by constructing clear enemies.

Anger, on the other hand, has been defined as an “indispensable political emotion”, promotes mobilisation during election campaigns more than other emotions such as anxiety and enthusiasm.

Therefore, to eradicate populism, a citizenship education must aim at assuaging this ‘smiling fascism’ by addressing the key question of how schools and citizenship education programs can deal with the feelings and emotions that motivate support for populisms or analysing the role of school—as a powerful socialisation tool—in the spread of emotions that foster undemocratic discourses.

-The writer is a Global Impact Fellow at Moving Worlds Institute

By Elias Mokua | 9 hours ago

By Agatha Kimani | 9 hours ago