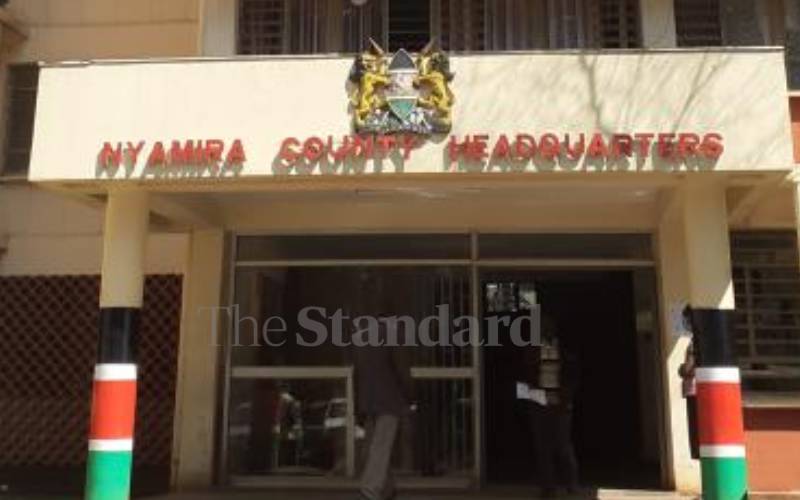 There was tension at the Nyamira County headquarters today after some protesting employees relieved themselves at the county offices.

About 15 in number, the workers marched to the offices that are housed on the first floor of the main National Government offices, demanding that Kiriago vacate office in respect to a court ruling that was issued in Kisumu last week by the Employment and Labour Relations Court.

The petition to remove Kiriago and his Payroll Manager Elmeldah Kemunto Nyaberi from office was filed by Vincent Omao, a citizen of the county.

According to the court papers, the two were hired on secondment from the National Government but the court maintained that their hiring was not competitive as should be in such a case.

The payroll cleansing has since claimed about 1,500 casualties within the circles of the county's workforce, all of whom are being surcharged for the alleged misdoings.

The employees who protested at the county headquarters are said to be among those affected by the purge.

According to a county worker who witnessed the incident said five of the men urinated at the entrance in turns as they shouted for the officer's removal.

Kiriago was not in office at the time of the incident.

Responding to the developments, Public Management Executive Thomas Nyariki said the county was in the process of executing the court order.

Nyariki said by unfortunately by Monday afternoon, the county had not been served with the court ruling.

"We are treating the case as a criminal act and already, we are following up with the law enforcing agencies for possible prosecution," Nyariki said.

County Police Commander Grace Kakai said the case was yet to be reported to the Police.

"We are yet to receive reports about the incident. Once the report has been made, then we shall move forward to investigate," Kakai said.

Employees may be overwhelmed with too much work and may begin contemplating transiting to another place to ease the burden.