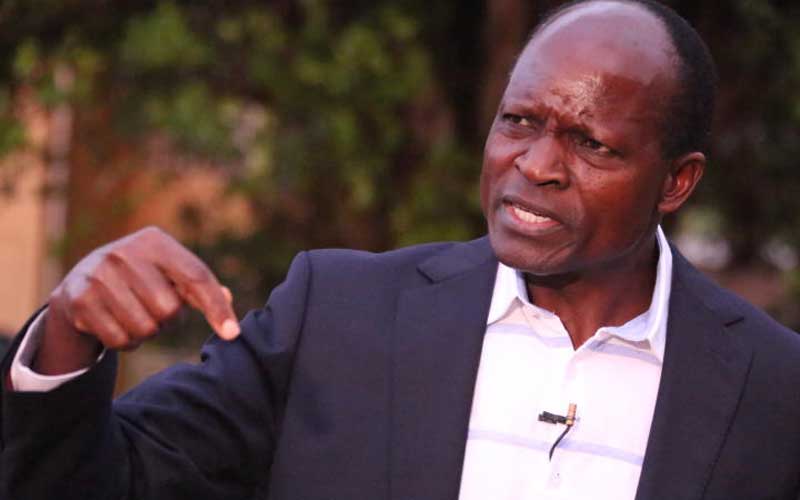 Migori Governor Okoth Obado (pictured) has accused some individuals in the ODM party of taking advantage of the graft charges he is facing to push for his removal from office.

Speaking exclusively to The Standard, Mr Obado said he had no problem with the ODM party and its leadership.

He, however, challenged unnamed party officials hell bent on seeing his ouster to provide minutes of the meeting that resolved to have him kicked out of office.

“The sheer number of police officers deployed to Migori town on Tuesday is a demonstration of how far this lie had gone. Migori has remained a peaceful town and we intend to have it that way,” said Obado.

But Obado says he has no problem being removed from office, but wants the drive to come from the MCAs, not any other quarters.

“What we are seeing is a well orchestrated drive coming from outside the County Assembly. Some of the (ODM) MCAs confessed that they were forced to append their signatures as a demonstration of their support for the impeachment drive,” he said.

The embattled Migori Governor, a teacher-turned politician, has had a rough patch, sometimes brushing the ODM leader Raila Odinga the wrong way.

He shot to the limelight in 2008, when he was gazetted by then Agriculture Minister William Ruto against Raila’s (then Prime Minister) preferred candidate Saulo Busolo, to chair the powerful Kenya Sugar Board.

When former President Mwai Kibaki replaced Ruto with Sally Kosgei, Obado’s fate was sealed, as the new minister gazetted the appointment of Mr Busolo to replace him.

In a gazette notice, Mrs Kosgei then revoked Obado’s appointment.

Obado resurfaced in 2013, as he rode against ODM, a party that draws fanatical support in Nyanza, to win the gubernatorial contest on then little-known Peoples Democratic Party. He garnered 132,687 votes against ODM’s Edward Oyugi, who got 115,270.

Come 2017, the governor contested on an ODM ticket, in a campaign that saw him and the now Migori Senator Ochillo Ayacko face off at the primaries. At some point the two were summoned by the Independent Electoral and Boundaries Commission chair Wafula Chebukati after their supporters clashed. Obado dismissed claims that he was a warlord.

Since late 2018, the Migori governor has been in and out of court after he was charged with the murder of eight-month pregnant university student Sharon Otieno. DNA tests confirmed he was the baby’s father.

Obado denied the charges but spent a month in remand before he secured a Sh5 million bond.

The latest tussle for the governor has been the corruption charges levelled against him by the Ethics and Anti-Corruption Commission, which saw him and some members of his family arrested recently, before securing a release.

Boasting the majority of MCAs, ODM has now rallied its members to impeach Obado, even as he insists he is loyal to the party.

“Graft allegations against me are still pending in court. So why the hurry? Let us follow the law,” he said.

Prospects of Premier League top dogs ahead of 2020/21 season

After a season of such total domination, there is some sound thinking behind the decision not to alter the title-winning squad too much and trust...

By Nicholas Mburu | 16 hours ago

By Isiah Gwengi | 17 hours ago