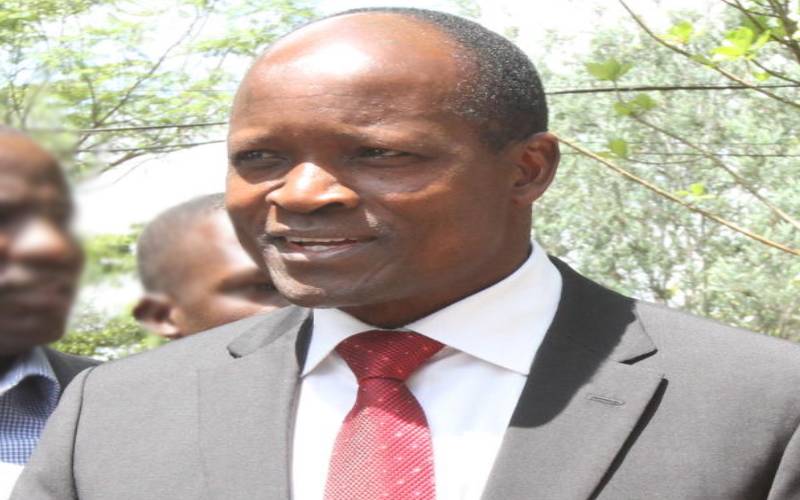 Moments after being released on bail by the anti-graft court, Migori Governor Okoth Obado has hit out at ODM for plotting to impeach him before the case in which he and some of his family members are accused of misuse of public funds is heard and determined.

Speaking to Standard Digital on phone on Monday, Obado (pictured) said he is aware of a meeting that took place between ODM top leadership and a number of MPs from Migori to plot for his ouster.

He accused the party leadership f inciting MCAs to prepare an impeachment motion against him in the coming days.

Sources intimated to Standard Digital that the MPs met some top party officials on Sunday at a City hotel with all MPs except Kuria West MP Mathias Robi attending.

According to a source privy to the discussions, the MPs were directed to whip their MCAs to impeach the governor over the ongoing graft cases in which he (Obado) and some of his family members are accused of embezzling Sh73 million public cash.

Obado said another meeting is set to take place on Tuesday where MCAs have been summoned at Chungwa House with the agenda being his ouster.

He said the activities taking place could be a wider scheme to influence the verdict of the cases against him, wondering why the party was in a hurry to impeach him.

“We have never seen where a father of a sick son buys a coffin before he is dead, even if he is critically ill, is there someone who already has the ruling before we even exhaust all the legal avenues at our disposal?” he posed.

Obado also claimed there has been a scheme to stop him from speaking to the media to tell them whatever is going on behind the scene.

He said the security around him during his trial have been anti-media, something the governor thinks is suspicious.

In a letter seen by Standard Digital, all ODM MCAs in Migori have been summoned to Nairobi on Tuesday with the main item on the agenda being Obado’s impeachment.

“Dear Honourable Members of ODM Party, Migori County Assembly, you have been invited to attend a Consultative Meeting tomorrow the Tuesday 1st of September, 2020 at 1.00 pm. The venue at the Party's Headquarters, Chungwa House…,” read the letter sent to MCAs by Majority Whip Kevin Keke.

Speaking to Standard Digital on phone, Keke, however, denied reports that MCAs are plotting to oust the governor, adding that the agenda of the meeting will be set during the meeting.

Keke said consultative party meeting’s agenda is set by those in attendance and that is why they are called so.

He urged the media to relax until the Tuesday meeting is over that is when the outcome will be made public.

“Why do you want to put words into my mouth, when I am directed by the party leadership to whip members to attend a consultative meeting, that is I do as a majority whip,” Keke said.

Those with expired passports to deposit them at the courts alongside sworn affidavits. Names and identity card numbers of the suspects to be deposited at the department of immigration to ensure that no one escapes from the country.