By Roselyne Obala | 2yrs ago 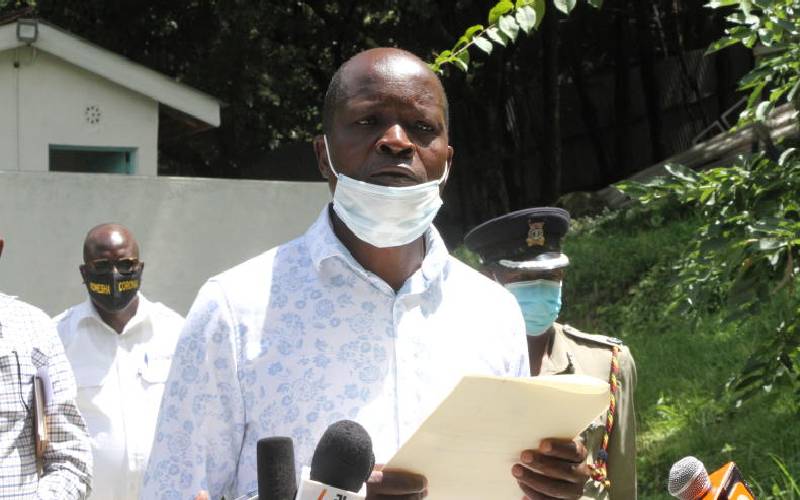 The Director Public Prosecutions (DPP) Noordin Haji gave the order in what he termed a web of conspiracy involving business associates through proxy companies and county staff.

The DPP also gave consent to the Ethics and Anti-Corruption Commission (EACC) to go after 13 companies the governor and his co-accused allegedly dealt with in the execution of the fraud.

The EACC sought Haji’s consent to charge the individuals with four counts: conspiracy to commit an offence of corruption, conflict of interest, money laundering and unlawful acquisition of public property.

According to the DPP, the anti-graft agency launched a probe into the case through the governor’s designated proxies and employees of the county government.

“The investigations were in respect to Sh73,474,37.90 being the sum indirectly received by the governor, through his children who received multiple payments from companies trading with the county government between financial year 2013/2014 and 2016/2017 and further in respect of the purchase of the property at Loresho Ridge,” the DPP said, noting that he was satisfied that there was sufficient evidence to charge the mentioned persons with various criminal offences.

“Investigations further revealed that the directors/proprietors of the companies/business entities were proxies of the governor, including three of whom were his brothers namely, Jared Kwaga, Patroba Ochanda and Joram Opala, and their mother Penina Auma Otago, and the spouse to Kwaga, Christine Akinyi and sister-in-law,” said the DPP.

He said the audit trail of the money revealed that the companies wired Sh38,949,376.90 to the governor’s children’s accounts, namely Achola Okoth, Susan Okoth and Jerry Okoth, which was used to pay their school fees, upkeep, maintenance and medical bills in Australia, Scotland and the United Kingdom.

Haji noted that some of the money was used to buy two motor Toyota Land Cruiser V8.

“The audit trail further disclosed that Sh34,525,000 was used to purchase a house in Loresho Ridge whose beneficial owner is Everlyne Adhiambo Zachary, the governor’s daughter,” said Haji.

The DPP said public monies were lost through the connivance of the governor and business entities through payments allegedly made for performance of contracts and probe of the money led to persons close to the governor.

Haji said when he received the file on July 1, he appointed a team of prosecutors to be part of an intra-agency team, bringing together officers from EACC to review and analyse evidence and got an independent file corroborating the claims.

Yesterday, EACC CEO Twalib Mbarak directed the named persons to present themselves at the commission’s South Nyanza regional offices in Kisii today (Wednesday) at 8am.

“More governors are under probe by the commission and their arrests are eminent.” Mbarak told The Standard.

Kenya among countries to receive food donation from Ukraine
Europe
By VOA
56 mins ago
Too much nudity robs men of excitement in the bedroom
BLOGS
By Awuor Omino
1 hr ago
Water harvesting technology from house roofs to water pans
Crop
By Muriithi Mugo
1 hr ago
Tips on saving water through sustainable use
Smart Harvest
By Dr Paul Kang’ethe
1 hr ago
.

By VOA 56 mins ago
Kenya among countries to receive food donation from Ukraine
.