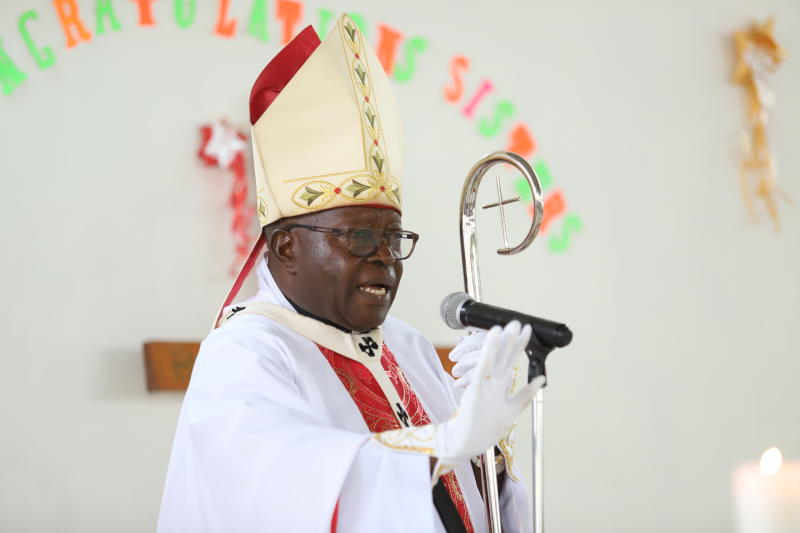 The retirement of Archbishop Zacchaeus Okoth (pictured) has brought to an end an  illustrious career of a man whose name was synonymous with the Catholic Church in western Kenya.

He has been at the altar for more than five decades, having been ordained into priesthood aged 26.

He was installed as the archbishop of Kisumu in May 1990.

OKoth will be remembered as a fiery prelate who gave the Kanu regime and later the Kibaki government sleepless nights through his hard hitting sermons.

His sermons and other church functions were always followed by journalists looking for his often controversial statements.

During the one-party regime in the 1990s, it was Okoth, former Maseno South Anglican Bishop John Henry Okullu (deceased) and a few others who kept Kanu on its toes.

Under cover police officers, then known as Special Branch, always trailed them and formed part of their congregation.

He is a close ally of Opposition leader Raila Odinga, who recently made him a member of the Building Bridges Initiative.

Raila once told a church function in Kisumu how Okoth once helped him to escape police who were pursuing him during the crackdown on anti-Government politicians in the 1980s and early 1990s. Raila said Okoth had him sneaked out of Ukweli Pastoral Centre under the cover of darkness, dressed as a priest, and helped him board a boat that ferried him to Uganda through Lake Victoria.

Yesterday, those who have worked with Okoth described him as a good shepherd.

Kisumu Archdiocese Vicar General Moses Omollo, who has worked as Okoth’s deputy for eight years, described him as a hardworking man who brought a lot of spiritual development in the church.

Fr Omollo recalls that Okoth found 14 parishes in the Archdiocese but as he retires, there are 57.

“He was a no-nonsense man with a strong personality, but in his way he brought joy to many,” said Omollo.

He said the focused cleric spent all the money he received on development projects.

“We are grateful for him and wish him joyful retirement. His spirit was to bring joy to the people and bring God’s word closer to them,” said Omollo.

As his deputy, Omollo said he watched the cleric work extra hours and sleep late. He describes Okoth as a very committed man of God. Karoli Achok of Nyawita Parish said Okoth had accomplished his core mandate of bringing Christ to the people.

He said he was highly committed to pastoral duties such as consecreting Holy Mass and Eucharistic celebrations, marriages, ordinations and diaconate.

“He disciplined us and showed us the right direction, walked with us and encouraged us all along,” said Fr Achok.

He revealed that Okoth was an understanding and listening leader. “He was a father to many and nurtured us to be good clergy men and women,” said Achok.

Steve Ouma, an assistant priest at the cathedral, said Okoth was a visionary leader and that he started many institutions that helped many.

George Odhiambo, the Maseno University chaplain, described Okoth as a good Shepherd of the church.