Why former President Uhuru Kenyatta is back on Twitter

Former President Uhuru Kenyatta is back on social media platforms with the account name, ‘Office of the 4th President of Kenya.’

The Standard has learnt that Uhuru, who is now the peace envoy for the Great Lakes Region and the Horn of Africa, will use the accounts to update relevant stakeholders on the peace processes in the region.

“The activities of the Ethiopian and DRC peace processes have generated significant global interest, so this medium amongst other channels will be used by the former President’s office to keep interested stakeholders updated,” a well placed source who did not want to be mentioned told the Standard.

Uhuru’s Twitter account had over 3.62 million followers when it was deactivated in March 2019. He was one of the most followed African leaders.

Shortly after his new account was set up, followers began accumulating and by publishing time on Monday, November 28, he had 24,700 followers. 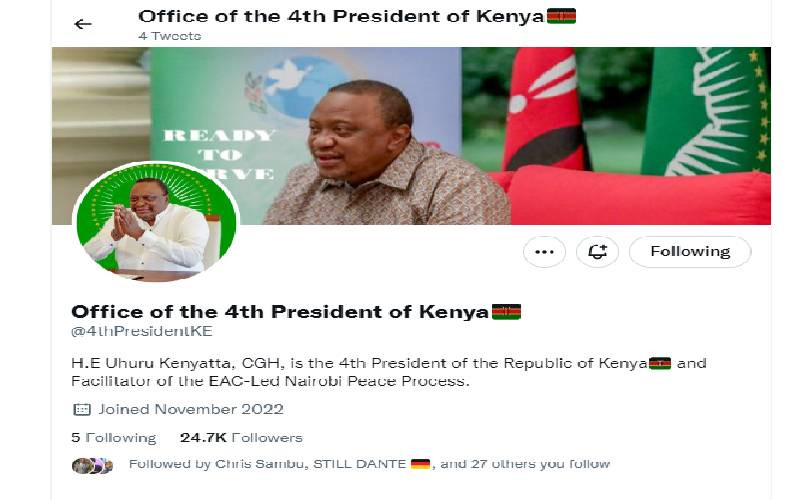 Today, photos of a meeting held at the Safari Park Hotel, where the former president was meeting Burundi's president Évariste Ndayishimiye and President William Ruto, for the official opening of the Third Inter-Congolese Consultations of the Nairobi Peace Process, was posted on the Twitter handle.

So far, the former president has been involved in peace talks that have brought an end to the two-year-long Tigray conflict in Ethiopia after the Ethiopian government and Tigray People’s Liberation Front signed a deal for cessation of hostilities.

Uhuru deactivated his social media accounts on March 22, 2019, saying he was constantly being insulted by Kenyans on his timelines.

Premium I am a mortician and married but women are dying to have me as their husband
NEWS
By Mary Imenza
12 mins ago
Police tea up
Cartoon
By Harrison Muriuki
1 hr ago
Premium Why there is no end in sight to soaring prices in Kenya
Financial Standard
By XN Iraki
2 hrs ago
Premium You might be a lawyer or engineer but you are not a manager!
Opinion
By Suleiman Shahbal
2 hrs ago
.