Going by Monday’s judgment upholding President-elect William Ruto’s victory in the August 9 presidential election, the Independent Electoral and Boundaries Commission (IEBC) should have been coming out smiling, satisfied that it had conducted a credible election.

The Supreme Court verdict, read by its president Chief Justice Martha Koome, to a great extent, helps IEBC chairperson Wafula Chebukati to repair some of the damage sustained when he supervised the impugned election of 2017.

But as the seven-judge bench acknowledged, it may not be enough to inspire public confidence in a body that has always taken the fall in every election cycle.

“The reactions following the declaration of results of the presidential election of August 9, 2022, show that the Independent Electoral and Boundaries Commission has not yet garnered universal public confidence and trust in the internal management of the commission and elections,” Justice Koome said Monday in her preliminary remarks before reading out the verdict.

Confidence in the electoral body has not always come through the courts. Despite the Supreme Court upholding President Uhuru Kenyatta’s election in 2013, the opposition, led by Raila Odinga, successfully lobbied chairman Isaack Hassan’s IEBC exit.

It was the general feeling among Raila’s supporters that the 2013 election was rigged, as it certainly is the feeling among the former prime minister’s followers this time round. In a statement released Monday, Raila said he “vehemently” disagreed with the judgment, a message that most likely resonates with his supporters.

Top among Raila’s grievances in his petition was the split within IEBC, brought to the fore on August 15, when the result of the presidential election was announced and made for a circus at the Supreme Court.

The apex court proposed ‘far-reaching reforms”, with Justice Koome saying they would lay out in their detailed judgment expected in 21 days.

For starters, the judges declared that the IEBC chairperson cannot unilaterally verify and tally results, meaning that one of the reforms could involve striking against an imperial chairperson of the IEBC and offering solutions to averting a future dysfunctionality of the IEBC.

“At the Serena Hotel press briefing, the four commissioners acknowledged that thus far, the entire election had been managed efficiently and credibly,” Koome said of the division that split the IEBC down the middle.

“The chairperson on his part did not make matters any better by maintaining a stoic silence even as things appeared to be falling apart. All this, in our view, points to a serious malaise in the governance of an institution entrusted with one of the monumental tasks of mid-wifing our democracy.”

Even as the nation waited for the Supreme Court’s verdict on Monday, it was not the first time reforms have been proposed in the electoral commission. It was the Supreme Court of 2013 that set the threshold for nullifying a presidential election, developed by the 2017 court, which created a guideline for the IEBC in conducting a credible election.

The public portal deployed in this year's election, for instance, was a result of the Supreme Court's recommendation on transparency.

In the wake of the violently disputed presidential election of 2007, the Justice Johann Kriegler commission proposed sweeping reforms, which included the integration of technology in the country’s election, a move that has been lauded for increasingly making the elections transparent.

Justice Kriegler also proposed timelines within which IEBC commissioners should be appointed, among other issues.

The events of recent weeks show just how hard a job the team of seven will have at sticking together until January when three commissioners – Chebukati, Abdi Guliye and Boya Molu – retire upon the completion of their six-year term.

From the admissions of the lawyers representing two factions within the IEBC at the Supreme Court, the electoral agency is more apart than it is together, potentially irreparably so.

“It is not a question of which faction within IEBC might be right or wrong. The accusations and counter-accusations serve to erode confidence in the commission as currently constituted,” governance analyst Tom Mboya says. He does not see the current commission surviving intact.

Whenever the country’s election agency has been as dysfunctional as the current one is, its conclusion has been the same – a disintegration that has resulted in lowered public trust in the institution.

It was the case when four commissioners walked out of Independent Electoral and Boundaries Chebukati after the nullified presidential election of 2017, after months of constant wrangling.

Chebukati’s commission is the only one that has resisted ouster since the promulgation of the 2010 Constitution, with previous commissions caving under the weight of immense pressure following disputed elections.

Before Hassan and his team exited in 2016, Samuel Kivuitu, who oversaw the 2007 election, walked down the path.

Postscript: There could be some light at the end of the tunnel. On Tuesday, the rebel commissioners led by Vice Cherera said they accepted and respected the Supreme Court verdict ruling upholding President-elect William Ruto's victory. 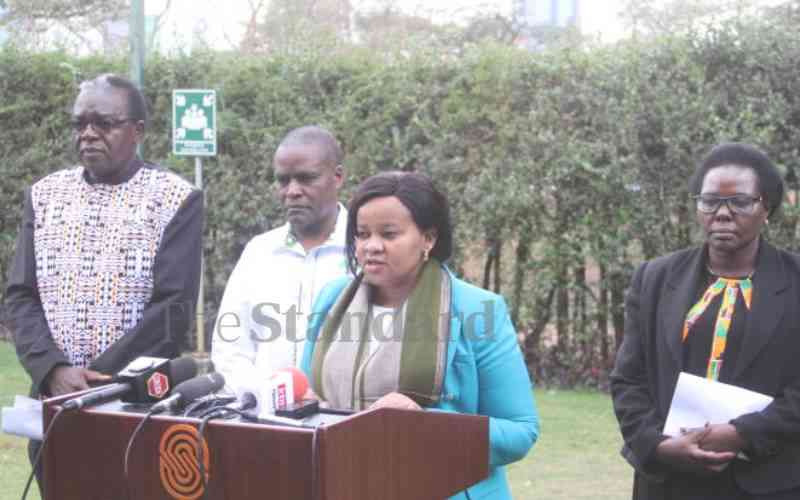