By Paul Ogemba and Kamau Muthoni | 5mos ago

Four electoral commissioners have urged the Supreme Court to disregard the submission by their chair and declare that the presidential election was bungled.

Vice-chair Juliana Cherera, commissioners Justus Nyangaya, Francis Wanderi and Irene Masit argued that the IEBC system was infiltrated and the presidential election so compromised that it was impossible to determine who won.

Through senior counsel Paul Muite and Issa Mansur, the commissioners asked the court not to be misled by the lies submitted by Wafula Chebukati to uphold the declaration of William Ruto as president-elect.

“We are asking the court to be guided by the position taken by the four commissioners since they are the majority and their position should guide the court in making a just decision. Do not be influenced by innuendos and sideshows against them raised by some people,” said Muite.

Mansur said the four commissioners made every attempt to have a credible election but Chebukati thwarted all their attempts which made them walk out of the National Tallying Centre and refuse to be part of an opaque process.

Mansur added that the lack of transparency witnessed by the commissioners from the time of procuring key electoral materials, the voter register to the tallying process showed that the chair was determined to bungle the election.

“A false narrative was being peddled that the four commissioners wanted to force a run-off but the truth is that they only asked the chair why he was announcing Ruto as president-elect when they had not verified all the results but they were dismissed,” said Muite.

Ms Cherera in her response through lawyer Apollo Mboya argued that the chair took the other commissioners for a ride when he changed their roles to deny them the opportunity to take part in the tallying and verification process.

Mboya argued that the vice-chair is affectionately called opaque because of standing for what is right and refusing to agree to a predetermined decision by the chair to announce a particular candidate without verifying full results.

“After all is said and done, this court will arrive at a conclusion that the chair was an agent of a presidential candidate. He was acting on behalf of Ruto and whatever results he announced do not reflect the will of the people,” said Mboya.

Mboya urged the court to go further and look at all those who committed the irregularities are agents of each other and the person who benefitted from the illegalities are co-conspirators and should not benefit from that illegality.

Lawyer Jotham Arwa for Nyangaya argued that there were interference with uploading of forms 34A and that the irregularities affected the results.

Arwa said the commissioner was in charge of the ICT and confirmed that a foreigner named Gudino Omar accessed the server several times, pulled down forms and uploaded others.

He added that the commission had not denied that the logs which showed illegal access to the IEBC servers did not emanate from the system.

Arwa added that the commissioner had confirmed that one Abdikahir Mohammed accessed the server more than 1,000 times yet he was not an authorised IEBC staff to prove that the servers were defiled.

Commissioner Wanderi through lawyer Jeremy Njenga argued that the four commissioners decided to disown their chair and tell the country what transpired at Bomas of Kenya.

“By telling the court and Kenyans the truth about what happened at IEBC before, during and after the election does not make him support or oppose the petition. He just wants to tell the truth and help the country know the truth,” said Njenga.

Lawyer Gordon Ogola for commissioner Masit said she did not come to court as a surrogate of any person but to confirm that the presidential election was a sham and that they could not determine who won.

According to Ogola, the chair excluded the other commissioners from the tallying process and they were only summoned and given handwritten constituency results to read to the public.

“She has confirmed that the results were declared without verification from 27 constituencies which makes the election a nullity,” said Ogola. 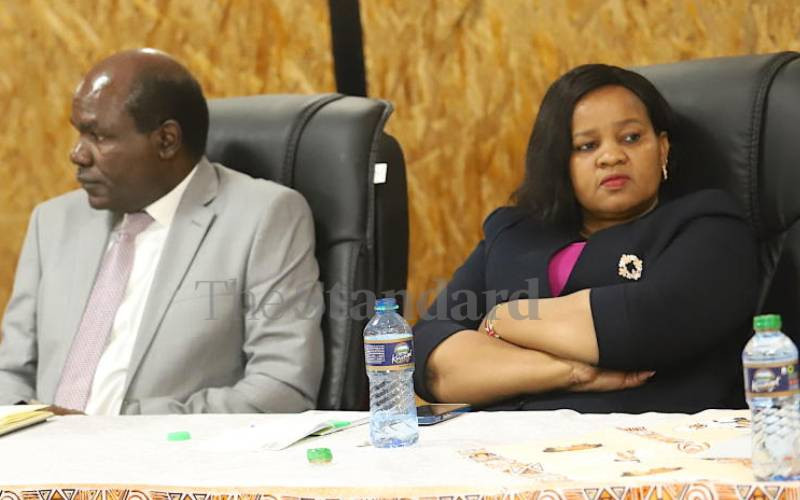 Premium What next for IEBC?
National
By Brian Otieno
4 months ago
.

2NK driver whose wife has given birth to 5 babies: 'I'm now a father of six at 28'
Rift Valley
By Kennedy Gachuhi
25 mins ago
Premium Karen Nyamu: Samidoh is a very responsible father
SCANDALS
By Benjamin Imende
38 mins ago
Easy recipe: Mozambican Peri Peri chicken
Food
By Lolita Bunde
1 hr ago
Be careful when hiring family, friends to your business
Career Tips
By Peter Theuri
1 hr ago
.