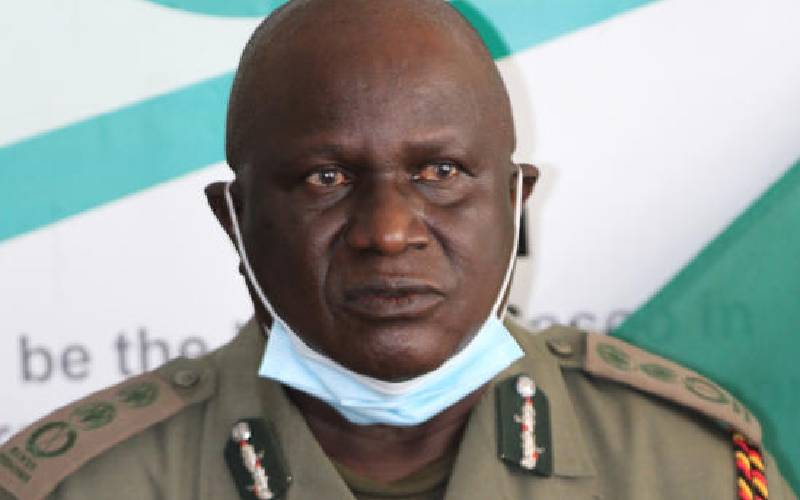 President Uhuru Kenyatta has revoked the appointment of Wycliffe Ogallo (pictured) as the Commissioner-General of the Kenya Prisons Service.

He has been replaced by retired Brigadier John Warioba who was sworn in immediately.

The State Department of Correctional Services has been directed to sanction disciplinary action against all KPS personnel who were on duty when the security breaches occurred.

Interior CS Fred Matiang’i said preliminary investigations suggested the escape from arguably the most secured maximum prison in the country was abetted by laxity and incompetence.

The terrorists vanished from Kamiti prison on the morning of November 15 in what Ogallo could only describe as an “unfortunate incident.”

He said the government will protect whistle-blowers who will volunteer information that could lead to the arrests of the prisoners who are described as dangerous.

Abikar was charged and convicted in 2019 over his links to al Shabaab and for abetting the Garissa University attack of April 2015 that left 148 people dead.

Odhiambo was arrested in 2019 for trying to join the Somali terror group.

Akhulunga was arrested in 2012 over a foiled attack on Kenya’s Parliament and charged with possessing explosives, ammunition and firearms.

The DCI has placed a Sh60 million bounty on their recapture.

The CS said more arrests and prosecutions will follow after the Directorate of Criminal Investigations moved in to probe the prison break.

The incident came in the wake of another shocking incident a month ago where a serial killer- Masten Wanjala- walked out of a police station where he was being held.

2014: He graduates with a master’s degree in public policy and administration from Kenyatta University

1985: He starts his career as a district officer in the Office of the President after graduation from the University of Nairobi with a Bachelor of Arts degree. He rose to the position of administrative secretary at the Ministry of Interior and Coordination

The new law would see secret lovers get locked out of their partners’ wealth in case of death.

By Caleb Atemi | 3 hours ago

By Gilbert Kimutai | 3 hours ago

Delicious debate: Between female and male fish, which is sweeter?
;
Feedback