Interior Cabinet Secretary Fred Matiang’i has warned law enforcement officers of sacking should they be found drunk while on duty.

Dr Matiang’i says drunk officers are an impediment to the fight against illicit brew sale and consumption, especially in the rural areas.

Speaking at the Kenya School of Government on Thursday, September 9, the minister said a 30-day operation to flush out illicit brew traders has been launched, and that chiefs and assistant chiefs who would be found drunk while on duty, or proved to be shielding illegal alcohol sellers, will be sacked.

“We are reviewing our officers within the structure. Those with substance abuse problems will be relieved of their duties to seek rehabilitation,” said the CS.

“I am not going to force anyone to live a life like mine of not drinking. How will you help us fight this menace if you are drunk? Does that make sense?” he posed.

According to the CS, the Interior Ministry “is not a rehabilitation centre to take in employees who are drunk”.

The minister partially blamed county governments for aiding the spread of illicit liquor trade in the country.

“The county governments are licensing bars, even in residential areas, saying it is their responsibility to license the businesses. This is something that the political class pretends does not exist,” said Dr Matiang’i.

His remarks come a few weeks after law enforcement officers in Bahati, Nakuru were interdicted following the deaths of ten people, who had consumed poisoned liquor at Hodi Hodi area. 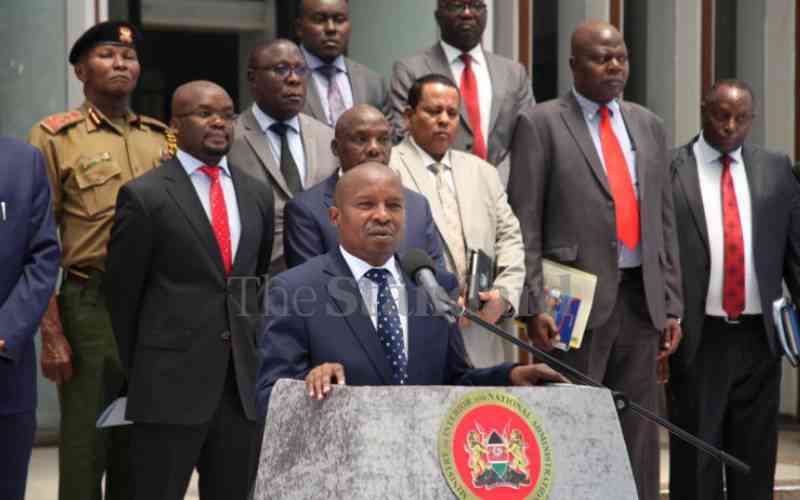 Kindiki unveils police unit to guard water sources, infrastructure
National
By Edwin Nyarangi
13 mins ago
KeNHA launches crack down on trucks overloading
National
By Edwin Nyarangi
27 mins ago
Eight under wears to be auctioned in Kisumu after tenant moved out incognito
Counties
By Mate Tongola
50 mins ago
Tanzania opposition rallies back but this doesn't mean democratic reform is coming
Africa
By The Conversation
1 hr ago
.