The country’s elephant population is going up, lions are declining while cheetahs, the fastest animals on land, are running into oblivion, according to results of the wildlife census released on Monday.

The country’s elephant conservation efforts have paid off with the number of elephants rising to 36,169 from 32,214 in 2014, a 12 per cent increase in seven years.

According to the newly released 2021 National Wildlife Census Report, the increase in the elephant population is due to continued monitoring facilitated by improvement on advanced technologies and methodologies.

The upward trend in the population is also attributed to decreased cases of poaching as a result of increased security within the protected areas.

‘Elephant man’ in long walk to save elephants

Tourism and Wildlife Cabinet Secretary Najib Balala said only 11 elephants were poached as opposed to 400 in 2013. During the peak of poaching in Kenya, the population reduced from 35,588 elephants in 2012 to 32,214 elephants in 2014.

A healthy elephant population, the report indicates, is a benchmark for the wellbeing of the entire ecosystem given the wide range of the animals.

“The charismatic nature of the African elephant, and its ability to modify its natural habitats, hence affecting the occurrence of other species where they range, monitoring elephants for provision of accurate and timely information on their population status is paramount,” says the report.

However, the report shows that other iconic species such as the lions are on a downward spiral as their range continues to dwindle.

The lions are listed as “endangered” by the International Union for Conservation of Nature (IUCN). Kenya is currently implementing the National Recovery and Action Plan for the Lion and Spotted Hyena where it hopes to shore up the number of lions in the country.

For the 1,160 cheetahs in the country, it is a race against time as their habitat continues to shrink.

Listed as “vulnerable” by the IUCN, cheetahs are now extinct in 20 countries and occupy only 17 per cent of their historic range. The report says about 80 per cent of the population of cheetahs in Kenya exist outside of protected areas and at the mercy of private and community landowners. 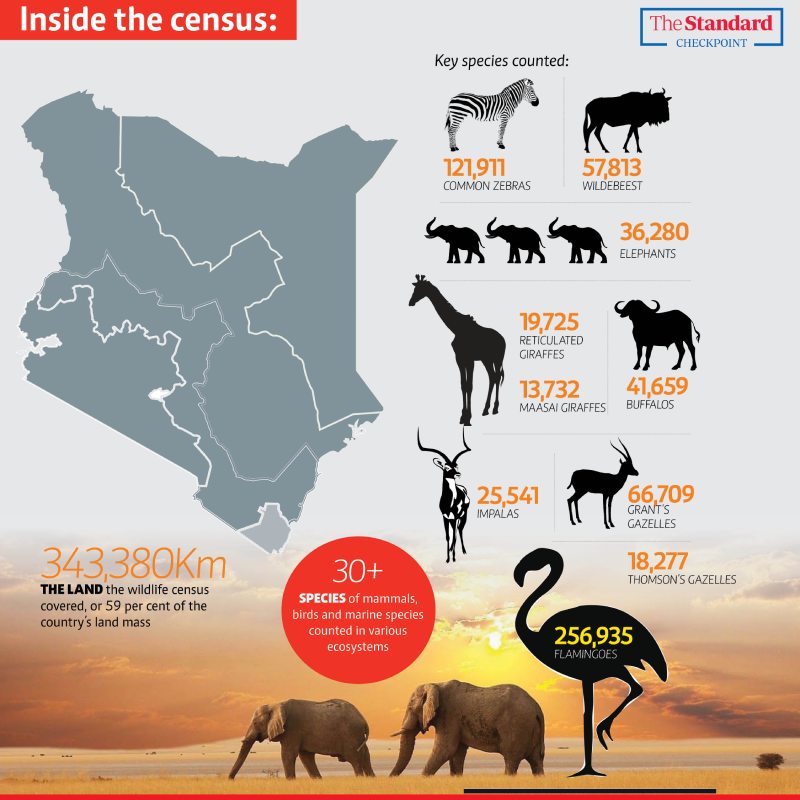 While poaching has in the past been a key factor in the decline of certain wildlife species, habitat loss as a result of increasing human population has become the major concern for conservationists.

For example, Kenya’s population has increased six-fold from eight million in 1963 to 47.6 million in 2019, exerting pressure on land.

“Increased human population has led to an increase in demand for land for human settlements, infrastructure, and agriculture. This has resulted in inland use changes and tenureship which have important implications for sustainable wildlife conservation in this country,” notes the report.

As a result, more humans have settled on land adjacent to protected areas and increasing the human-wildlife conflict. In the semi-arid areas of the country, more and more pastoralists have been driving their livestock into nearby parks and reserves as the scrabble for pasture and water gets intense.

“This scenario will possibly affect the wildlife species negatively as their habitats become encroached and competition for resources—water, space and forage—increase. As such, displaced wildlife is likely to occur as they avoid competition with the livestock. It is unlikely that the majority of the wildlife species would co-exist with livestock or in areas with high density of human settlements. Conflicts like crop raids, human-deaths and injury, property destruction and disruption of community social and economic life are destined to ensue in new crop farming and settlement areas,” says the report.

The first National Wildlife Census was conducted in the last three months through ground and aerial techniques to count large mammals in the open savannah, arid and semi-arid areas with camera traps and dung count methods being used in forested ecosystems.

To continue monitoring the country’s wildlife, Kenya will conduct a similar census every three years.

“The reduction in losses in terms of elephants, rhinos and other endangered species is because of the great work that KWS, its officers and men are doing to ensure that the (wildlife) heritage is protected,” said President Uhuru Kenyatta when he received the report.

On the issue of human-wildlife conflict, Uhuru assured Kenyans that the Government will continue seeking sustainable solutions to the challenge, and urged sector stakeholders to continue educating host communities on the importance of wildlife conservation.

SCROTAL ELEPHANTIASIS: How the disease is a nuisance to men in Coast region

A road engineer accused of amassing more than Sh1 billion through suspected fraud has come out to defend himself with tonnes of documents as evidence.

Scars, a reminder of the State's terror in Mt Elgon

Moses Miruni said he was wrongfully arrested in January 1995, detained and tortured until 1998. FERA is a guerrilla movement the State believed...

People living with disability to get special IDs
.