I have lost everything, says teacher jailed for husband's murder 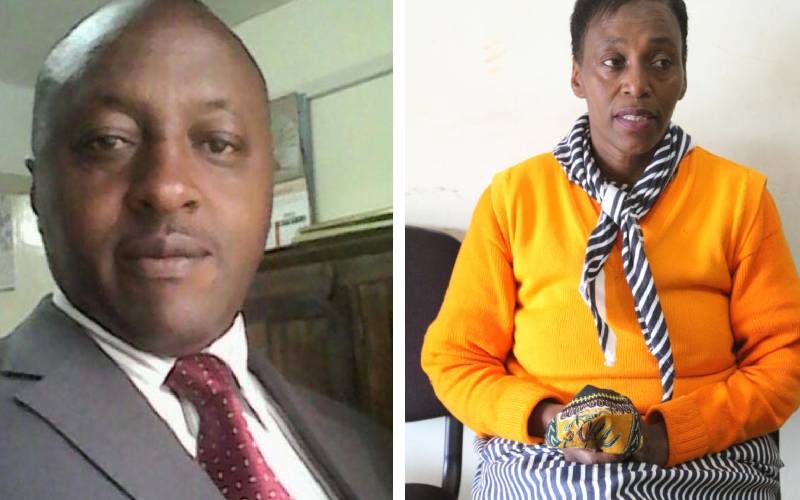 Jane Muthoni, the former Icaciri Secondary School principal sentenced to 30 years in jail for the murder of her husband Solomon Mwangi, has for the first time revealed how life has taken a dramatic turn after she was found guilty by the court.

In an interview with The Sunday Standard, Muthoni talks of life with the man she was accused of killing, their dreams, hopes, ambitions and her new life behind bars at the Lang'ata Women’s Prison in Nairobi.

“I have lost everything that I worked for, including my family and career,” she says.

But it is not all gloom for the mother of three who after spending two months in jail now says she is slowly rediscovering herself and her purpose in life, and adapting to a life as an inmate.

Jane Muthoni: Paying the price of murder in the family

It was freezing cold at the Lang'ata Women's Prison and Jane, as she loves to be called, had been looking forward to the interview. She said she wanted to give her version of the story as part of her healing journey.

Dressed in a yellow pullover and a matching pair of leg warmers, Muthoni opens up and reveals that life in jail has not been easy for her. But amid it all, she can still afford a hearty laugh as she settles down for the interview.

Muthoni seems settled, a complete opposite of the person she was during the trial. The long weaves have been done away with and now she spots short, curly hair, which she says makes her look fresh and young.

Even with this new phase in life, some things from her old life still linger on. One of them is the night she was told her husband was dead. The news came through a call from the Murang’a Directorate of Criminal Investigations (DCI) officer.

“The call changed my life,” she says. “My children and I had been worried for the one week that he was missing. I quickly got dressed and proceeded to meet the Murang’a DCI officers who were investigating the disappearance of my husband,” she says.

Muthoni never went back home. She was arrested and informed that she was the main suspect in the murder of the man she says was and remains the love of her life.

“He was the kind of man that I prayed for. Charming and welcoming,” she says of her husband. It was these two characters that swept her off her feet in a courtship dance that lasted four years.

“Solomon was a gentleman and we lived in harmony. He was open-minded and honest,” Muthoni recalls.

In 2001, six years after their marriage, Mwangi was transferred to a school in Murang’a County. Muthoni remained at Ndaragwa Girls.

At the time, her family was young and their firstborn daughter was barely four years old. This did not however seem to be a major challenge for the couple.

They knew their love would stand strong against the challenge posed by distance. Mwangi would work in Murang’a but travel back home in Nyandarua every weekend to be with his family.

“For us, every weekend was like another honeymoon,” Muthoni reminisces.

This continued until 2014 when Mwangi was transferred to Kiiru Boys in Murang’a and named the principal.

Muthoni too was transferred to Icaciri School in Gatundu in the neighbouring Kiambu County. This was the first time since their marriage that the two were working close to each other.

This meant that either of them could visit without much hustle. And they also decided that they would eventually settle down in Thika town where they had purchased a piece of land.

As Nakuru judge Joel Ngugi sentenced Muthoni to 30 years for murder, her family and friends relived their memories.

Mwangi's sister, Mary, said she was glad that justice had finally been served even as she recalled the good old days she shared with her brother and sister-in-law.

“I'm yet to heal from the tragic end,” Mary said a week before the sentencing.

On the many occasions that she visited the couple at their Nyahururu home, Mary says she could not imagine that her sister-in-law would commit murder. She treated her well and showed a lot of respect. She seemed the perfect example of a sister-in-law.

Mary says however that they did not engage in lengthy conversations whenever she visited as Muthoni was always busy. The two enjoyed a warm relationship, she says.

Stephen Mbae, Mwangi's first cousin, revealed a side of Muthoni that many people do not know.

“Jane is very aggressive. She did everything to defend her family, but we never thought she would go to the extent of killing,” Mbae said.

He was actively involved in the matter when Mwangi was reported missing to the day his body was recovered in Juja.

Mbae also happened to have met Mwangi days before his disappearance and Muthoni during the search for the missing man.

He says as a family they have since forgiven Muthoni for robbing them of the only remaining pillar.

After the death of their parents, Mwangi took over the leadership of the family and his death has shaken them, Mbae says.

But Rachael Muthoni believes her younger sister Jane was framed. Rachael says Muthoni could not have organised the murder of a man she loved so much.

“It can’t be my sister. She has been framed and convicted wrongly," she said on the phone.

Rachael, who claims to be Muthoni's confidante, says her sister loved her family so much and could do anything for her husband and children.

“She is a jovial and down-to-earth person. I'm actually surprised that she will be spending time in jail for an offence she did not commit," Rachael says.

She recalls how while growing up Muthoni played the role of peacemaker in the event of a dispute in the family. She has played this role even in her adult life.

“Every time we have issues at home, Muthoni is always there for us. She will call both parties and sort out any issues and make sure that everyone is at peace," Rachael says.

And like other couples, Muthoni and Mwangi had challenges in their marriage but she had always employed her conflict management skill to sort out the issues at her home.

“They were just a perfect couple. They were the talk of Nyahururu where they lived," Rachael says.

From Lang'ata, Muthoni says the comments made by some of the people who knew her are false.

“We truly loved each other,” she says. “Perhaps as we went on with our lives there were some who were jealous of us.”

She says the allegations by some of her in-laws and colleagues that she was a problematic wife are lies.

“But I forgive them for this. They know as a wife I did all I could for my family,” Muthoni says.

As she gets into her third month of incarceration, she says she is not detached to life outside the walls of Langata Women’s Prison.

Muthoni talks about the draining of bank accounts held jointly between her and her late husband and attempts by those close to her to disinherit her children.

“But I have faith that justice will prevail,” she says.

Her definition of justice is that the true killers of her husband be found.

“I loved Solomon too much to harm him. It might not be today but one day the truth will be known,” she says.

As Muthoni waits for the justice train to come her way, the court already served its version of justice, finding her guilty of the murder of the man who wooed her for four years before she said yes to his marriage proposal.

As she rediscovers and redefines herself, she has accepted that life without the man of her dreams will never be the same. It will not be easy not just for her, but for her children and her husband’s family.

“We all feel the pain,” she says. “But we have to find the strength to keep on.”

Her strength, she says, comes from those she left behind.

“My children give me the reason to smile. They give me the hope to keep on living,” Muthoni says.

The man she says she loved is gone. The freedom and respect she commanded as a school principal too is no more. Her children are away from her. Her in-laws are still too pained by loss to think of her the same way they did before Mwangi's death.

Hope is all she has left to hang on to. Now and for the next 30 years.

Manyika House: An echo from Kenya’s colonial farming past

The farm was bought in 1976 with former Cabinet minister John Michuki as one of the leaders, as Murang’a sources informed me.

By Jepitha Mwai | 6 hours ago

Ann Kananu set to be sworn as Nairobi governor
;
Feedback