How religion can fix the economy

Governments spend huge sums of public funds to gather data on the economy and demographics that leaders can use to respond to societal problems effectively.

It is the same data the public uses to determine the leaders’ ability to govern and the effectiveness of their policies and administrative choices. How religion can propel a nation to economic success

The government used at least Sh18 billion to carry out the 2019 census. This was only months after spending Sh6 billion to obtain the biometric data for all citizens under the Huduma Number registration.

The value for money for this huge investment is in the ability to use the information gathered in understanding the socio-economic challenges and possibly proffer solutions.

Uhuru hints at gradual re-opening of places of worship

Coronavirus has stopped everything, it is time to focus on God — Wrestling legend Hulk Hogan

One important piece of information usually contained in census reports is the populace’s religious affiliations.

According to the 2019 census, for instance, at least 85.5 per cent of Kenyans are Christians and 11 per cent confess the Islamic faith.

The traditionalists, atheists, other religions and those who didn’t know or state their religious affiliations constitute 3.4 per cent.

The Hindus are the minority at 0.1 per cent. Among the Christians, Protestants, Catholics and the Evangelicals are the majority at 33.4, 20.6 and 20.4 per cents, respectively, out of the population of 47.2 million.

To the naked eye, these religious demographics may pass like any other inconsequential stats. But the moment we extrapolate them into our economic, social, political, leadership and governance realms, they elicit weighty and confounding questions.

By their very nature, all religious teachings espouse the values of character, integrity, ethics and morality, competence, capacity and protection of the weak and the poor.

Those called to serve among the religious community must be of high moral probity. In the same breath, those elected and/or appointed to serve in government and confess any of the religious faiths are obligated to uphold the beliefs, ideals and standards of their faith and religious teachings in the execution of their duties.

As a country, we affirm our absolute allegiance to the supremacy of the Almighty God as contained in the preamble of our Constitution.

In any case, we are such a religious nation that our Parliament convenes a National Prayer Day annually. In times of famine, after disasters of our own making, during elections, for “Handshake” and even for coronavirus, we held inter-denominational prayers.

On the days set aside for worship, we congregate to pray, seek atonement, present petitions and seek renewal of our faith.

But alas! Something does not add up in this equation. By the same faith and standards of probity, we all know and understand our public coffers have some holes that have robbed us of our deserved economic prosperity like our former peers in Singapore, South Korea and Malaysia.

For instance, not long ago, we held national prayers for divine protection against the coronavirus at State House, Nairobi. But even before we had said Amen, Kemsa (Kenya Medical Supplies Authority) heist happened.

One, what do we make of these national demographics of our religious beliefs? Two, how does such religiosity co-exist with the high level of corruption in our society? And three, how can we redeem ourselves and live the virtuous life that we individually and collectively profess as a nation?

On the first question from an economic point of view, it can only imply one among three things: First, the data is misleading and thus cannot be relied on for decision-making.

Secondly, the religious virtues preached and taught in our places of worship have largely fallen on deaf ears and thus majority of us are pretentious; and thirdly, the religious leaders have collectively lost their voice in our society and/or failed to admonish and hold to account those in government.

While there are many verses in the holy books talking about corruption, unjust gains, protection and preservation of public interest, they only prescribe a strict code and demand absolute compliance.

For example, several verses in the Bible, including but not limited to Proverbs 15:27, Psalm 82:3, Jeremiah 17:11, Matthew 7:15 and 2 Timothy 3:2, warn of unjust money and wealth, the rise of false prophets and emergence of men who are lovers of money and themselves.

For the Muslims, religio-ethical norms constitute the central point in the discourse of Islamic economics. In a classical article published in the Annual Survey of International and Comparative Law, Mohamed A. Arafa (2012) examines the question of corruption and bribery within the practice and ideals of Islam.

He concludes that the terms used for corruption “fasad,” “batil,” and “rashwa,” are powerfully negative, implying a severe abhorrent for the practice under Islamic law.

At the moral level, Islam upholds a “zero tolerance” for bribery. Mohamed argues for a case to enlighten religious leaders to address social problems and raise their voices against injustice and corrupt governments.

Furthermore, a moral education can be designed to inculcate among believers a clear preference for virtuous behaviour, both in public service and private business. Even the traditionalists and atheists advocate for the same values within the society.

On the second question, the social, economic and political decay within the society can only imply either the “Word” has lost its saltiness and/or the populace has become immune to its counsel.

Otherwise, who are these corrupt individuals? Are they only the negligible minority who have no confessed affiliation to any of the religious groupings from our census data?

Or is it possible all this plunder of public resources and corruption in private business happen outside the religious economy? Is it not highly probable that part of the loot is brought to places of worship for cleansing?

Granted, religious organisations are commanded to take care of the windowed, orphaned, needy, poor and weak in the society.

Governments and political leaders also have a solemn obligation to adopt policies and programmes that protect the same constituency and preserve public interest. Is it not ironical that official corruption hurt the vulnerable among us the most?

On the final question of how we can deal with these issues, no society can find true prosperity by collectively living a lie.

First, if truly about 97 per cent of us confess to be either Christians or Muslims, then the ideals and practices of these religious teachings must be manifest in public service, private business transactions and even in our families. We are either hot or cold… It can never be anything else in between.

Second, religious leaders must enlighten themselves to lead, advise and direct their flock, providing quality civic education and engagements.

They can look from among themselves the informed, wise and knowledgeable to educate fellow believers on the electoral processes, traits of the leaders they deserve/desire and the consequences of poor choices of leaders.

Yes, we have been promised a holy place after life under the sun, but for now, we live under the authority of elected governments.

Finally, it is about time that true religious leaders asserted their God-given authority and called political leaders to order for the sake of the vulnerable among their flock.

It is such a dishonour to witness those called to faith bow to worship political gods and their loot.

[The writer is an economist]

The county government of Kajiado yesterday denied having enacted new land regulations, in response to a public notice that is currently making rounds.

Uhuru unveils major plans for Nyanza ahead of visit

President Uhuru Kenyatta yesterday unveiled the bag of goodies he will be taking to Nyanza ahead of his tour of the region. 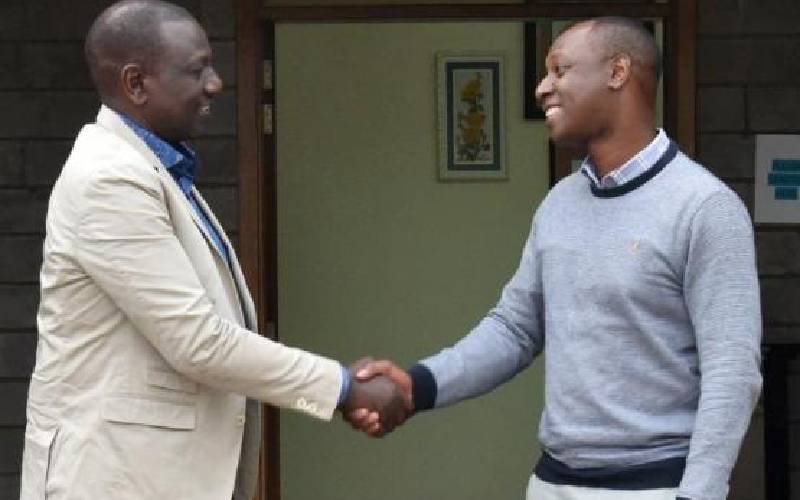 By Rosa Agutu | 8 hours ago