Nairobi Governor Johnson Sakaja on Saturday, August 27 came face to face with the filth that the city residents have been choking under.

Sakaja toured different parts of the city to evaluate the garbage disposal situation.

“I have given firm directions on resolving the current garbage problem across Nairobi in the next few days,” said Sakaja on Facebook, posting pictures highlighting the dire situation.

In the run-up to the August 9, 2022 General Election, Sakaja pledged to construct a waste recycling plant near the Dandora Dumpsite.

“Garbage menace in Nairobi has been a problem in the past two governments. If elected, my administration will ensure that plans commence to set up a recycling plant that will turn the waste to energy," he said on May 9. 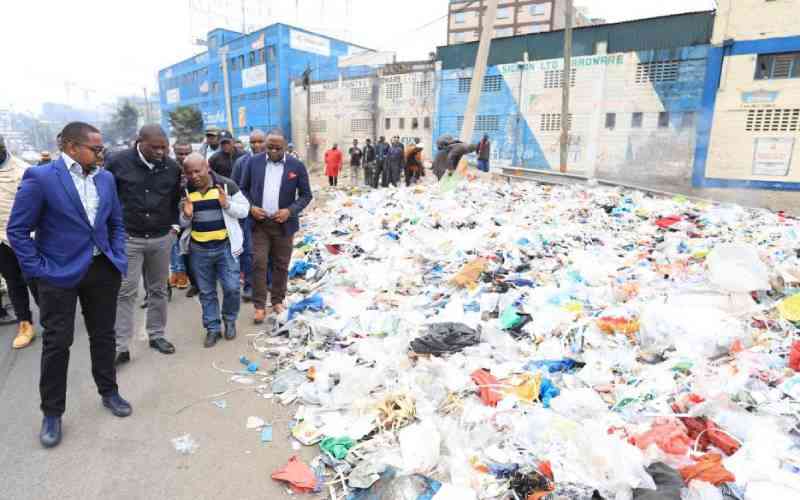 Data shows that Nairobi generates 3,000 metric tonnes of waste per day and most of it is disposed at the Dandora dumpsite.

The dumpsite was opened in 1975 and declared full and unsustainable in 2001.

Today, the Dandora Dumpsite is more than three times full, holding more than 1.8 million tonnes of solid waste against a capacity of 500,000 tonnes, with more than 3,500 tonnes of waste deposited at the site daily.

The Nairobi Metropolitan Services (NMS) had pledged to start a Sh20 billion recycling plant that would decongest the site.

In his manifesto ahead of the August 9 polls, Sakaja had said he’ll seek to unblock sewage disposal systems to make Nairobi a clean city.