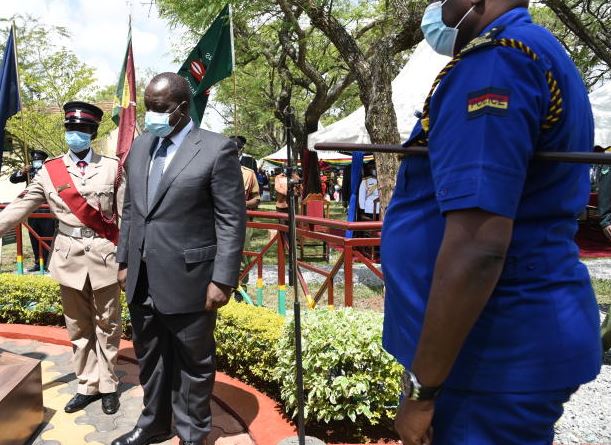 Interior Cabinet Secretary Fred Matiang’i (centre) has ruled out the return of gaming companies whose licenses the Government had revoked.

Dr Matiang’i at the same time directed Betting Control and Licensing Board (BCLB) to furnish Inspector General of Police Hilary Mutyamabi and DCI chief George Kinoti with details of all licensed gaming companies operating in the country.

The DCI and the IG will conduct due diligence on the directors of those companies in what appears to be a renewed attack on gaming companies by the Government.

The CS’s announcement appeared to be directed to the 19 betting firms that were locked out last year out in a raft of stringent measures meant to control gambling.

“It will not happen under my watch. It’s a decision that we have taken and we will not go back,” said the CS, who spoke yesterday at the Administration Police Training College in Embakasi, Nairobi, during an event to honour officers killed in the line of duty.

He said the Government would not allow return to the country of deported foreigners linked to the gaming companies. Last May, the Interior Ministry announced that 17 foreigners who were in the country illegally and were linked to gaming had been deported.

Yesterday, Matiang’i said he had been under intense pressure from some un-named individuals to allow some of the blacklisted gaming companies to resume operations. He also cited calls from some religious leaders to have some of the banned firms back in operation.

The CS said some of the callers had also attempted to intimidate Government officials over the matter citing their connections to ‘high offices’. “I take instructions from my boss who is the President. And his instructions are crystal clear. My boss has not told me to do those things,” Matiang’i said.

On Thursday the betting regulator had annulled the license for Milestone Gaming Limited.

Milestone, a new betting company that resurfaced with the Sportpesa brand, had their license cancelled after they breached procedural requirements on change of shareholding structure.

Donald Karauri, the CEO of Sportpesa, was among those who appeared at the offices of BCLB to show cause. “Having considered the foregoing, the Board was not satisfied with the explanations proffered by you and accordingly arrived at the decision to cancel your company’s Bookmakers’ off-the-course license number 00205 dated 6th October, 2020,” read a letter by BCLB Chairman.

Sportpesa’s comeback has met several hitches, including an unending legal bout between the shareholders of Pevans East Africa, which originally owned the Sportpesa brand.

Also at stake is the Sh15 billion tax obligation that Pevans had agreed to pay the taxman, as questions arise on whether the new entity to operate the SportPesa brand assets can shoulder the tax obligations of the former.

On November 24, BCLB accused Milestone of “blatantly” changing its shareholding structure. At the hearing where Karauri, Ngatia and advocate Robert Macharia appeared, BCLB said that Milestone did not acknowledge the changes.

BCLB last year announced that it had deferred renewal of licences for 13 casinos, six lotteries and eight betting firms.

On November 24, BCLB ordered Milestone to appear before it on Thursday and explain why its license should not be revoked after an alleged investigation which revealed a relationship with the initial SportPesa owner Pevans East Africa Limited.

High Court judge Pauline Nyamweya, in her ruling, barred the board from executing the contents of its November 24 demand and not to interfere with the betting firm’s business until the case is heard and determined.

“Leave herein granted shall operate as stay of any other action by the respondent and interested parties that will interfere with the applicant’s business and operations, pending the hearing and determination of the applicant’s amended notice of motion or until any further orders by this court,” ruled Justice Nyamweya.

Milestone went back to court complaining that although there were orders barring BCLB from taking any action, it withdrew the initial letters and replaced them with the November 24 one.

BCLB summoned Milestone to explain their relationship with Pevans Limited, if any, and show cause why the license should be withdrawn.

The betting regulator’s chairman Cyrus Maina wrote to Milestone’s operations director Bernard Chauro requiring the directors of Nob Five Limited and Wilson Karungaru Ngatia to appear before the board and explain the Milestone’s puzzle.

“It is in view of the board that the actions that the aforementioned actions of the company constitute a material breach of the applicable requirements for which its license may be canceled or varied,” Maina wrote to Milestone on November 24.

Milestone in its court papers explained that the brand SportPesa is not owned by Pevans. Instead, it alleged that it is owned by SportPesa Global Holding. It also roped in Pevans as an interested party in the case.

However, the BCLB chairman in his letter requiring it Milestone’s owners to appear before it on December 3, says that the board’s investigations revealed that Milestone’s shareholding has since changed.

By Josphat Thiongó | 9 hours ago