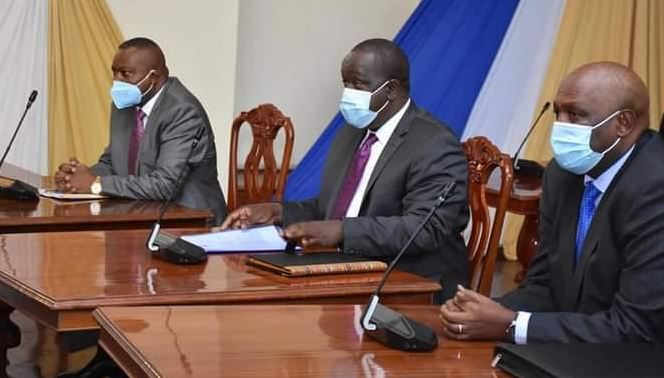 Journalists covering a meeting between Interior Cabinet Secretary Fred Matiang’i and Senate security committee on Wednesday were barred from accessing the premises.

CS Matiang’i (pictured) and Police IG Hillary Mutyambai had been summoned to appear before the committee to explain reasons behind the arrests of Senators Christopher Langat, Cleophas Malala and Steve Lelegwe on Monday.

The chairperson of the Senate Committee Yusuf Haji questioned why journalists were at the premises, and ordered parliament security not to let them in.

Journalists who were present recall hearing Haji asking Citizen TV Reporter Sam Ogina: “What are you doing here? I don’t remember calling you. Go back we will call you later,” he said.

Some senators have since condemned the move by the committee to bar media from covering the event saying that the public has a right to information.

Makueni Senator Mutula Kilonzo Jr tweeted: “I disagree with the decision of the Senate Committee on security barring media from the grilling of the CS Interior, IG Mutyambai and DCI Kinoti on the unlawful arrest and detention of Senators Malala, Lelegwe and Langat. The public have a right to know.”

Both Matiang’i and Police IG Mutyambai had failed to appear before the committee on Monday.

The three were picked by detectives from their homes and taken to their respective counties for questioning.

They were however released pending further directions from the Director of Public Prosecutions.

Langat was the first to be released on Monday evening after he was accused of presiding over an illegal oath involving 200 youth last week.

Malala was released on Tuesday, free of charge, after he was accused of flouting Covid-19 rules.  Upon his release, Malala said the arrest was only meant to deter and derail him from the focal attention which is the conversation around third generation basis for revenue sharing formula that has generated the heat in the senate.

Lelegwe was grilled for a second time yesterday at Maralal Police Station over alleged incitement. He arrived at the station at about 10am and was questioned before being released on police bond. He had been questioned on Monday before being released at 7pm and directed to report back to the Directorate of Criminal Investigations office yesterday. Police said they are investigating him over claims of incitement and cattle rustling.

Premium John Ngumi: The blue-eyed boy of State corporations
Financial Standard
By Macharia Kamau
16 mins ago
Conceding after losing is graceful and classy
BLOGS
By Cosmas Butunyi
16 mins ago
Profile: The four IEBC commissioners who disowned presidential results
National
By Amos Mabinda and Patrick Vidija
26 mins ago
Premium Cool under fire: Chebukati the soft-spoken man of steel
National
By Amos Kareithi and Brian Otieno
26 mins ago
.