How plot to force formula backfired 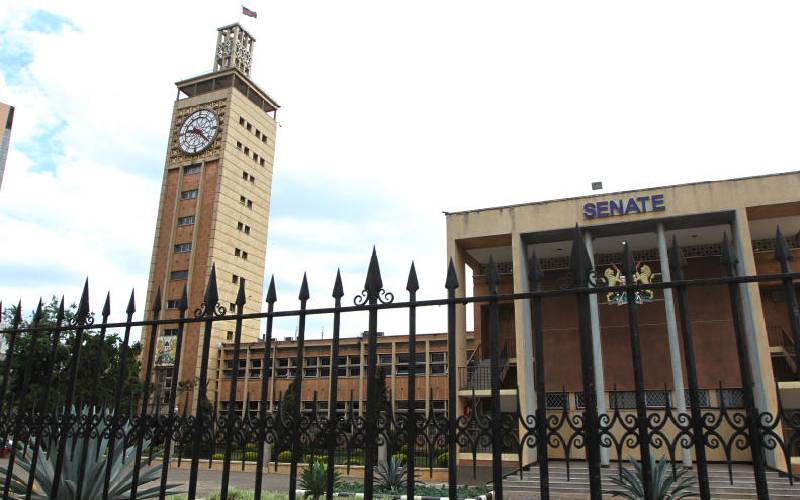 Plans to bolster numbers to push through a proposal favoured by the State on revenue allocation backfired in dramatic scenes at the Senate on Monday.

The proposal by nominated Senator Petronilla Were seeks to retain the second generation formula in sharing Sh316 billion between the 47 counties.

It was debated last week, by-passing other amendments before the House, and appeared to be heading for the finish line before Monday’s dramatic events that saw the arrest of three senators.

Cleophas Malala (Kakamega), Christopher Langat (Bomet) and Steve Lelegwe were arrested in dramatic scenes on Monday and taken to their home counties, denying them a chance to attend the special sitting at the Senate.

Plans to have nominated senators vote in their place however came a cropper when Malala and Langat officially wrote, through their lawyers, to Senate Speaker Ken Lusaka, withdrawing their authority to delegate their vote to the nominated senators from their counties.

Sources said the State was not leaving anything to chance and had directed nominated Senators Naomi Shionga and Alice Milgo to be on standby and vote on behalf of Malala and Langat respectively, as the substantive senators were being held by police.

However, the plan backfired when the Sakaja axis dropped the bombshell by tabling letters by Malala and Langat withdrawing their delegation to the nominated senators.

Lusaka is reported to have delayed acknowledging receipt of the letters amid claims that he was under pressure to rule in favour of the formula backed by President Uhuru Kenyatta and ODM leader Raila Odinga.

This prompted Kilonzo Jnr to challenge the speaker to resign for appearing indecisive.

The opposing camp through Kindiki moved an adjournment motion in the afternoon after a successful one in the morning, demanding to have the three arrested senators in the House before debate proceeded. The motion was lost after a tie of 29 for and 29 against.

“Adjournment motion by Kindiki was negative. This takes us to Article 22 (2)(a) “in the case of a tie the question is lost. Which means the question to adjourn is lost and therefore we proceed to the next order,” ruled Lusaka.

Majority whip Irungu Kang’ata’s motion to proceed with the debate and extend its sitting time until the closure of business sailed through with 31 votes against 28, which was made possible after Kindiki’s wing lost the vote of senators Moses Wetang’ula (Bungoma), Samson Cherargei (Nandi) and Amos Wako (Busia).

“The House is proceeding with the amendments by Senator Petronilla Were,” ruled Lusaka.

Were’s formula has been backed by Uhuru, Raila, Amani National Congress Party Leader Musalia Mudavadi and the Council of Governors.

Deputy President William Ruto is said to be backing ‘Team Kenya” in support of a formula tabled by Senator Mithika Linturi.

Despite this setback, Kindiki, Kilonzo Jnr, Sakaja and Murkomen challenged the speaker to make a determination on the fate of the vote by the arrested senators.

“We need to understand Standing Order 78. I would like to table a letter from Malala and from Langat to the speaker,” stated Kindiki.

“They must first be recognised to determine whether the motive that we have all debated of arresting these three senators had something to do with delegating their vote and then (getting) somebody else to vote against their will,” said Sakaja.

Sakaja questioned why Lusaka allowed debate on the Were formula to proceed before a determination on the voting matter of the three senators.

“The next order is Were’s amendment and it will be voted on. We want to know who will vote on behalf of Malala and of Bomet. So just tell us who is going to make the decision on behalf of those two counties, so that we (can) determine how we are going to move ahead as a House,” pressed Sakaja.

Sakaja stressed on the withdrawal of delegating authority by the two senators.

“Mr Speaker you must rule to us now whether our standing orders have changed,” said Sakaja.

“There are issues that have been put for determination. When people come to equity they must come with clean hands,” he said.

Senator James Orengo (Siaya) then came in, calling on the senators not to debate in fear, but to do so correctly and sequentially.

“A motion has been moved, it has not been seconded, it has not been proposed and then in the middle of it you’re dealing with another order. This is a procedural motion. I think even the issues being raised are important,” said Orengo.

When Lusaka eventually made a determination, he ruled: “My hands are tied. The speaker has no vote.”

This threw Orengo, Majority Leader Samuel Poghisio and Kang’ata off balance, and the three leaders asked for time out.

“The speaker’s ruling based on the interpretation of the Standing Orders cannot be faulted,” he said.

Orengo agreed, but called for time out.

“We need to adjourn this House until Wednesday. With the current polarised and divided House, we are not going to make any step forward. Let us retreat and come back on another special sitting, I believe we shall agree on this issue,” he said.

Later, Orengo proposed for some time to come up with a solution.

“I stood here some few minutes ago to move a motion of adjournment, but I have changed my mind following the contributions by senators. Now give us 30 minutes to come up with solid resolutions on this matter,” he said.

Murkomen supported some time out, admitting that the stalemate was divisive.

“Let us get time to agree. Senators who will determine the fourth formula will not find it easy. This issue cannot be resolved in a day,” said Murkomen.

“I want to urge the leadership of the House that this is yet another opportunity to do what we did in the last House. Let wisdom prevail. Let there be no winners or losers; let us be the Senate of Kenya. This House is irretrievably polarised because of this matter, and yet this country needs us to hold it together,” he said.

Kang’ata sought 15 minutes break to allow senators find a solution to the stalemate.

“Give us 15 minutes to retreat and agree; we have until 9pm,” he said.

Lusaka suspended the siting for 30 minutes.

When they resumed, there was white smoke - a mediation committee of 12 members was unveiled and tasked with hammering a deal on the revenue sharing formula.