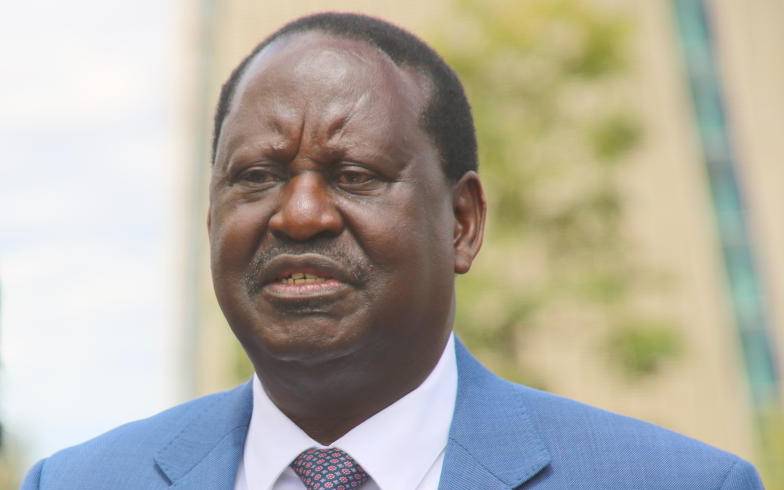 ODM leader Raila Odinga (pictured) has broken his silence over the stalemate on the Revenue Allocation Bill at the Senate, which has created a rift between his party and its ally Jubilee.

Just a day to the defining moment when the senators are expected to vote on the bill, the ODM boss waded into the issue calling for calm to address the fragile issue.

Some Jubilee senators led by Majority Leader Irungu Kang'ata have gone public with their support for a sharing formula based on population size in which most populous counties will have more funds allocation as less populated ones see their revenue decrease. ODM legislators, on the other hand, have argued that one county’s gain should not come at the expense of another county’s loss.

To address the standoff, the former prime minister said in a statement released on Monday that the country ought to adopt the recommendation of Commission for Revenue Allocation (CRA) which is people-driven.

“The key principle in the CRA recommendation on the third basis for revenue sharing for the next five financial years is that allocation should be population-driven. The CRA recommendation is based on an understanding that county governments are about service requirements of the population including in health, agriculture, infrastructure, education, among others,” he said.

“Under the circumstances, the country and our people would better be served if we adopted the recommendation of the CRA for the next five years.”

Raila further recommended that the thorny issues should be addressed to the CRA, the body mandated by Article 216 (1) of the Constitution of Kenya to handle revenue formula, to iron them out.

By avoiding to take a firm side over the issue, the ODM leader challenged the counties to seal the holes of wastage and widen their revenue net to bridge the gap.

He said “The resources currently being recommended can adequately serve our counties if we eliminate corruption in addition to heavily punishing those perpetuating the vice both at the national and county levels. Luckily, the war on corruption is yielding fruits and should safeguard public finances.”

“We must also focus on encouraging counties to raise own-source revenues from the economic activities within the county and demanding a prudent usage of those resources.”

In a short Twitter post, the DP said that a consensus could easily be reached without tongue-lashing that has pitted senators against one another.

“The ongoing revenue formula debate is unnecessarily divisive. The Constitution envisages fair and equitable sharing of all our resources. The legislature MUST as per its MANDATE structure a WIN-WIN formula that is sensitive to proposals made without hurting any county,” he posted.

Over the weekend, Murang’a Senator Irungu Kangata served an ultimatum to ODM side saying the Jubilee faction could backtrack on its support for BBI if the Orange party will back down in supporting their (Jubilee’s) preferred revenue formula.

His sentiments triggered harsh criticism from Kakamega Senator Cleophas Malala who told Kangata off and urged him to separate BBI from the revenue standoff.

But some ODM legislators appear to be leaving no chances after the threat from the Jubilee side.

“We are in support and we have the numbers to pass the Bill on Tuesday so we do not need any whipping on the vote. ODM is in government and we must support the Government position, let them bring it on, we cannot risk the BBI because of a small stalemate,” Kisumu Senator Fred Outa told The Standard.

The standoff has regenerated into a full-blown blame game threatening to roil the enjoyed dalliance of country’s big parties.

ODM party chairman John Mbadi pushed the blame to Senate Speaker Ken Lusaka’s door-step saying he should play an instrumental role in finding a middle ground over the impasse.

Mbadi accused the senators of dragging President Uhuru Kenyatta and Opposition chief Raila Odinga into the matter, instead of squaring it on the floor of the House.

“There is no reason to drag in Raila or President Uhuru Kenyatta’s name in this matter. The leadership has failed in their persuasion and consultation. Giving ultimatums and threats does not help,” said Mbadi.

Mbadi said the senators cannot be dictated to strike an agreement. ODM and Jubilee are expected to hold a crisis meeting ahead of the crucial voting, which in the past have yielded no result.

By James Wanzala | 13 hours ago