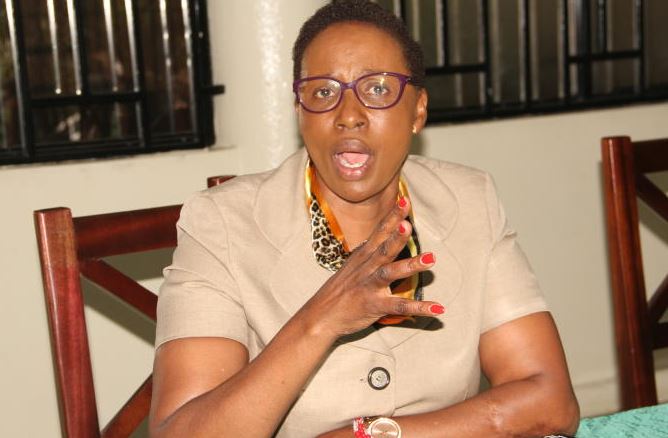 Nairobi County Assembly Speaker Beatrice Elachi (pictured) and MCAs are wrangling over the legitimacy of a policy approved by the House to have the Kenya Revenue Authority (KRA) manage the capital city's revenue.

The procedure for passage of the Sessional Paper No 1 of the Policy Framework for the Revenue Collection and Management in Nairobi County has escalated their differences.

The report recommends the adoption of a revenue collection system managed by the KRA in the capital among other things, but this has led to a dispute between the Speaker and the ward reps.

Led by Majority Leader Charles Thuo, a section of the MCAs have now termed two special sittings held to pass the Policy Framework for the Revenue Collection and Management in Nairobi County as illegal, since they did not follow due procedure.

Elachi sworn in as CAS amid puzzle of appointments

Thuo, who doubles up as Dandora phase three MCA, stated that irregularities had been committed in passing the policy paper, creating loopholes that can and might be challenged in court.

The Majority Leader accused the Speaker of not following due procedure when getting approval for the special sittings, thus rendering the policy approval process irregular.

According to Nairobi City County Assembly Standing Order 30 (1), the Speaker may appoint a day for a Special Sitting of the County Assembly only on the request of the Leader of the Majority Party of the House or the Minority Party Leader.

Thuo, however, states that neither he nor his Minority Leader counterpart David Mberia had requested for any of the two Special Sittings held within a period 10 days.

“We have held two Special Sittings that were neither called by the Leader of Majority nor Minority. The first sitting was held last week, where the Sessional Paper was tabled and it was illegal because it was not requested through the procedures laid down,” he said.

According to Thuo, irregularities committed might form a basis for people who were against the policy to go to court, exposing the assembly to legal battles.

Thuo also termed a letter dated July 15, 2020 fronted by the office of the Speaker and one bearing his alleged signature and showing that he had requested for a Special Sitting as fake.

The differences between Elachi and Thuo had also played out during the Special Sitting held on Thursday this week. Drama began after a member rose on the floor of the House and requested to know who had called for the Special Sitting.

Elachi replied that it was Thuo who had called for the sitting only for the Majority Leader to interrupt her and clarify that he did not call for any sitting. This led to an altercation that saw Elachi verbally suspend Thuo for one week.

“It is on record that the Speaker claimed that the Majority Leader requested for the Special Sitting, which was not the case,” Thuo said, adding that it was important to regularise the process to prevent someone challenging it in court in future.

Hamza/Maringo MCA Mark Ndung'u further accused the Speaker of always invoking the name of the president and threatening MCAs whenever she wanted to achieve her agenda in the assembly.

Ndung'u said Elachi had gone rogue and was now making decisions without consultations.

“We are all in support of our party leader who is our president and when we hear him being mentioned, as members we have to agree with the issue at hand. But Elachi is using his name to pass her own agenda in illegal ways,” he stated.

Elachi, however, said the request for a Special Sitting did not have to come from the Majority Leader as an individual, but his office.

On the matter of invoking the name of the president to achieve her agenda, Elachi said she was merely reminding the MCAs that they promised President Uhuru Kenyatta to support the NMS and that she was not threatening anyone.

“They can engage in politics in other matters but I have told my members time and again that I will not condone politicising the NMS issue. They are trying to sabotage the implementation of the revenue collection system by KRA, which I will not allow,” stated Elachi.

Clan asks Icipe to be kicked off their land