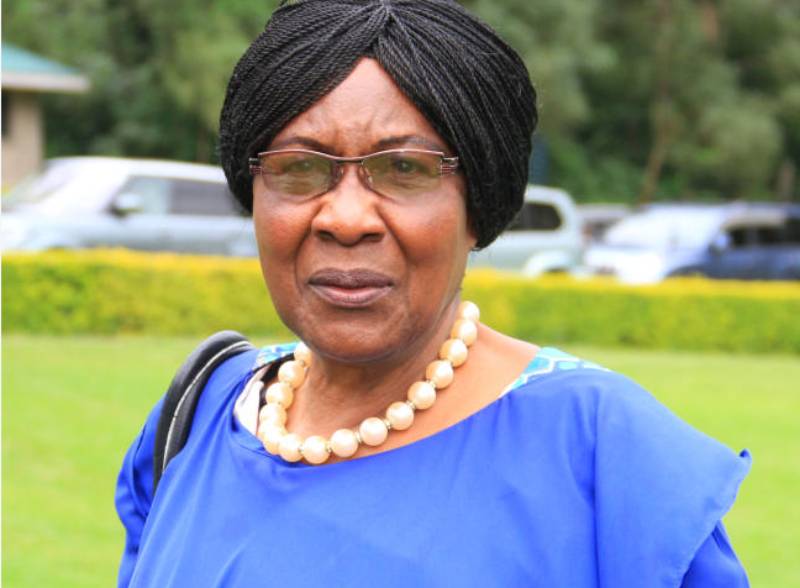 If Canon Yeremiah Musungu Awori, who was the first African to be ordained priest in Young Kavirondo was alive today, he would shake his head in disapproval at the crime that has landed his daughter behind bars.

The 12th born in a family of 16, Grace Wakhungu (pictured), 79, cut a lonely figure on Thursday evening when Milimani anti-corruption court magistrate Elizabeth Juma sentenced her to more than half a century in jail.

The trial court ruled that Wakhungu and her co-accused, Sirisia MP John Waluke were guilty of defrauding the National Cereals and Produce Board (NCPB) and sent Wakhungu to 69 years in jail if she fails to pay close to Sh1 billion fine.

Ironically, Wakhungu might enjoy some of the reforms initiated by her brother, Moody Awori, fondly referred to by prisoners as uncle Moody, when he was Kenya’s vice president and minister for Home Affairs where the prisons department was domiciled.

Wakhungu is a younger sister to the former vice president.

Still, the senior Awori would have been a disappointed man following revelations before the trial court that his daughter received Sh40 million as part of the Sh297 million paid out for supplying air to the NCPB.

According to a family book, “The Amazing Story of the Awori family: Seizing the moment,” Wakhungu’s father demanded high standards from his children, including excellent academic performance that has seen the family produce top scholars and politicians.

Wakhungu is a Butere Girls alumni and initially worked as a teacher before becoming a community social worker at the then Bungoma County Council, a job that saw her win a scholarship for further studies in Germany after training at the Kenya Institute of Administration.

Wakhungu, who also speaks fluent German, then moved to London, UK and enrolled at the Hendon College of Technology.

In London, she studied business and finance before landing a job at the National Insurance Corporation in Uganda, a country where the Aworis have a family link that saw one of their own - Aggrey Sirioyi, contest for presidency in 2001.

Here, she was with her brother Aggrey, Ernest Achibo and Horace. They fled Uganda after Idi Amin’s takeover in 1971. Amin considered Aggrey a close ally of former Uganda President, Milton Obote.

Back home, Wakhungu who was married to the late Matthew Sarapayi Wakhungu, joined the Central Bank of Kenya as a researcher, but later moved to the Office of the President where she headed staff development.

A number of Kenyans who studied at the Government Training Institute in Mombasa in the 1980s will remember the former VP’s sister who was appointed to serve as the institution’s principal on February 15, 1984.

The mother of five then joined Kenya Reinsurance Corporation as the general manager until she was appointed Consolidated Bank of Kenya’s deputy CEO, a position she held until she retired.