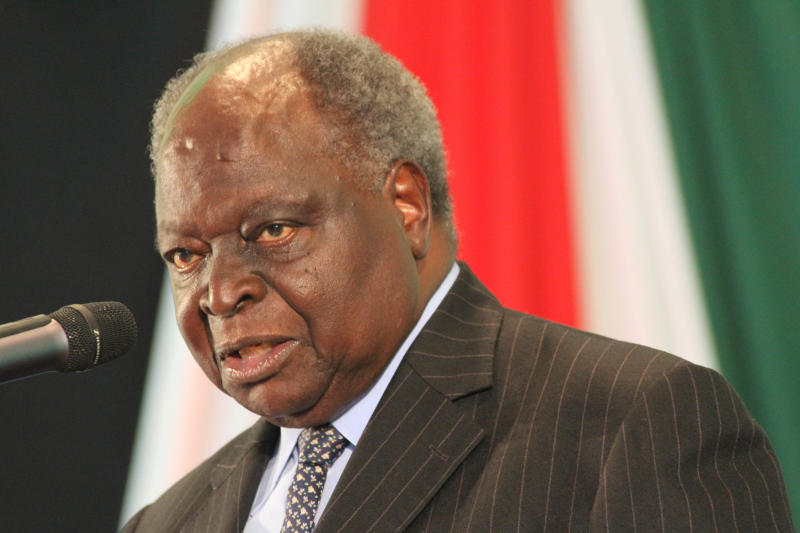 The 1997 presidential election was a contest between Moi and Kibaki, who at the time was the leader of opposition. Moi won the election with 2,445,801 votes while Kibaki garnered 1,895,527 votes.

Despite the 500,000-plus vote difference, Kibaki challenged Moi’s victory through a petition at the High Court where he argued that malpractices such as rigging had cost him the election.

The case was a huge test for Judiciary and it was settled due to a fatal mistake by Kibaki when he failed to serve Moi in person with the petition.

Moi had been gazetted as the duly elected president on January 5, 1998, but on January 22 Kibaki filed the petition challenging validity of the results.

One week after filing the petition, Kibaki published in the Kenya Gazette a notice of the petition informing Moi and then Electoral Commission of Kenya boss Samuel Kivuitu of the case and that they should pick copies of the plaint at the court registry.

When the dispute came up for hearing before Justices Emmanuel O’Kubasu, Mbogholi Msagha and Moijo ole Keiwua, Moi claimed he was not served in person within 28 days after the election.

This was not the first petition following the advent of multi-party elections in 1992.

Harun Mwau, one of the unsuccessful candidates in the 1992 presidential election, had challenged the validity of Moi’s victory.

But the High Court threw out his petition although the judgement did note that Mwau “was a man of great industry and unrelenting crusader for justice and the rule of law.”

In the 1997 case, Kibaki’s contention was that he could not serve Moi personally because of the tight security surrounding the president.

On December 10, 1999, after almost two years of litigation, the judges dealt the final blow to Kibaki’s appeal when they ruled that he had not shown that any efforts had been made to serve Moi.

“On the issue of who is to be served, we very much doubt if a party who has taken a great deal of trouble to draw up a petition would be ignorant as to the person or persons against whom he is complaining and the reliefs he seeks from that person or persons,” read part of their judgement.

According to the judges, to serve a person with a document meant making personal delivery and not resorting to other means like a gazette notice.

The judges noted that the notice in the Kenya Gazette only directed Moi to obtain a copy of the petition from the office of the Registrar of the High Court when the law insisted on personal service.

They also dismissed claims of evading personal service, ruling that election petitions involved Kenyans who prized their titles of ‘honourable’ and would not contemplate that those involved in petitions would wilfully take cover in order to avoid the process of the law.

“Election petitions are of such importance to the parties concerned and to the general public that unless Parliament has itself specifically dispensed with the need for personal service, then the courts must insist on such service.”

The judges concluded that their hands were tied since they had to follow the law as was enacted by parliament on personal service.

Their decision kept Moi in power to complete his term in office but opened the door for amendments to election laws that now allow court orders to be served through alternative means, including publication in newspapers.

By Alexander Chagema 54 mins ago
Will Duale hold talks with Shabaab or tackle them head on?