Who will succeed Gen Mwathethe as the CDF? 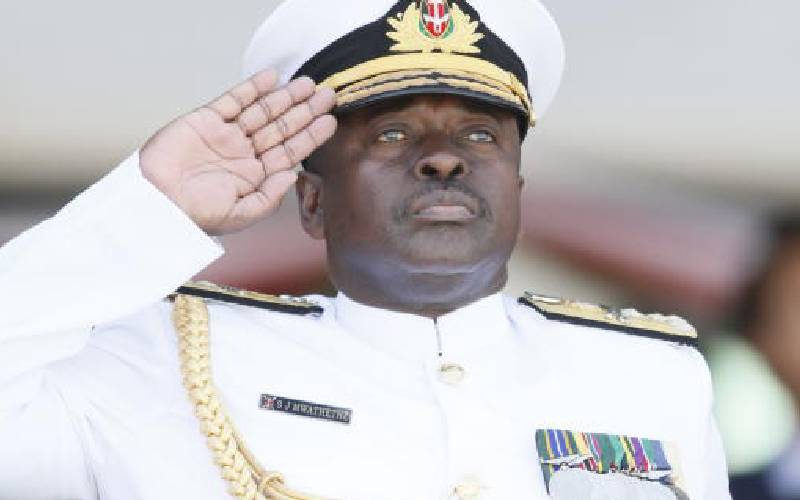 There’s speculation President Uhuru Kenyatta, the Commander-in-Chief of the armed forces, may extend Gen Mwathethe’s term by a year.

A KDF source said there were no signs of ceremonies associated with imminent departure of the KDF chief.

“If he was leaving, he would already have started visiting service command stations to bid them farewell. We would be seeing activities here and there but as of now, it is still quiet. We are just waiting,” a source said.

The KDF Act says a CDF, his deputy and service commanders shall serve a single term of four years or retire upon attaining the mandatory retirement age.

But the Act also says the President may, on the recommendation of the National Defence Council, extend the CDF’s term for a period not exceeding one year in times of war or emergencies like political uncertainty.

Top on the list of those to succeed Mwathethe are his vice Lt Gen Robert Kibochi, Army Commander Lt Gen Walter Raria and Lt Gen Leonard Ngondi, the force commander of the AU-UN Hybrid operation in Darfur, Sudan.

The officers may be retired and others promoted to take over.

This will depend on the outcome of the National Defence Council meeting where it is normally agreed on the way forward and the President advised accordingly.

Given President Kenyatta is set to leave the country on Thursday for China, many say a decision, if any, will be made after he returns.

Under the Tonje rules, the position of the CDF is rotated among the three services - Kenya Army, Kenya Air Force and Kenya Navy. The rules, by Retired Chief of General Staff Gen Daudi Tonje, have steered appointments in KDF.

There is silent lobbying among those hoping to take over from Mwathethe.

The new CDF will oversee the transition from the Kenyatta presidency in 2022. And according to the Somalia transition plan, KDF is supposed to withdraw its troops from the war-torn country by 2021, which the new military boss will also oversee.

The KDF Act also says, in appointing the CDF, the President shall take into account the service, seniority, military and formal civil education, the possession of a degree from a university and military and security experience.

He joined the Navy in 1978 as a seaman. He trained in the Royal Military Academy, Sandhurst in the UK alongside King Abdullah II of Jordan.

In 2017, President Kenyatta appointed him to chair the Blue Economy implementation committee.

Its mandate include co-coordinating and overseeing implementation of prioritised programmes and submitting monthly progress reports.