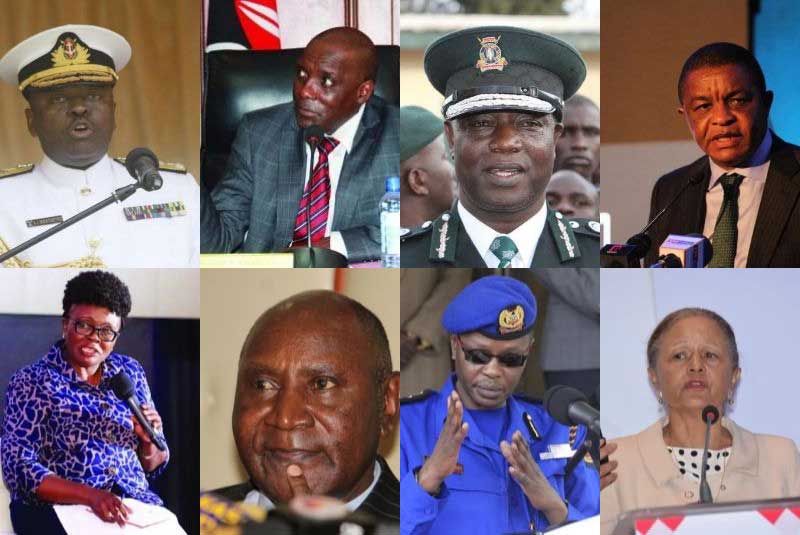 President Uhuru Kenyatta is expected to make key appointments as he enters the second year of his last term in office.

Some of the new appointments are expected in the security sector where top officers are expected to retire after either serving their terms or attaining the mandatory retirement age.

Among them is Inspector General Joseph Boinnet, whose four-year term expires in March with the law barring him from re-appointment for a second term.

Boinnet officially took office on March 11, 2015. On the other hand, Boinnet’s deputy Edward Mbugua attains the mandatory retirement age of 60 in June.

However, unlike the IG, the Deputy Inspector General’s term can be extended. MPs gave the President a leeway to have the DIG serve on contract upon attaining the age of 60.

Chief of the Defence Forces (CDF) Samson Mwathethe turns 60 this year. His four-year-term ends early this year having been appointed in April 2015.

The KDF Act states that a CDF, Vice CDF and Service Commanders shall serve for a single term of four years or retire upon the attaining of the mandatory retirement age, whichever comes first.

However, the President may, on the recommendation of the Defence Council, extend the term of office of the top military chiefs for a period not exceeding one year.

At 62, Isaiah Osugo is also set to leave the Kenya Prisons as Commissioner General before the end of this year.

The President will also have to nominate the replacement of Edward Ouko as Auditor General when his eight-year term ends in August this year. To avoid creating a vacuum, the process of seeking his replacement may commence early since the position entails vetting by parliament.

Central Bank of Kenya Deputy Governor Sheila M’Mbijjewe, who turned 60 last year but was allowed to complete her four-year contract, is also expected to be replaced.

Eyes will also be on State House and Treasury as Kenya Revenue Authority Commissioner General John Njiraini’s term ends in March this year.

Njiraini turned 60 in October 2015 but stayed on until his second and last term expired in March 2018. However, he was given a one-year extension.

It is not clear if the current board led by Francis Muthaura will recruit a new Commissioner General or give Njiraini a second extension.

The other key appointment expected is the managing director of Kenya Pipeline Company, after suspended chief Joe Sang signalled that he will not seek a second term.

Also of significance will be the appointment of a new National Land Commission (NLC) whose nine-member team completes the tour of duty in February after completing the mandatory six-year term.

Already the commission has signalled the State to commence the process of replacing it. NLC Vice Chair Abigael Mbagaya has written to Uhuru, through the chief of staff Joseph Kinyua, over the impending expiry of the term.

According to the law, President Uhuru Kenyatta is required to declare a vacancy in the office of chairperson and members within 14 days after the office falls vacant.

The priest pointed out that Uhuru has already left a legacy in the years he has been in power.