The power struggle between Raila and Kalonzo can only intensify

By Macharia Munene | 3w ago

Apart from making Azimio champions to sing of his political brilliance, William Ruto has become the reference point for those aspiring to take his job in 2027.

Since President Ruto won in part because he started his presidential campaigns early, others have started doing the same in the hope of replicating his feat five years down the line.

Both men, desperate for recognition as opposition leaders, use Ruto as their political bouncing board as they compete to be seen faulting Ruto’s government. Although the burden of proof on one’s fitness to lead is more on Kalonzo than on Raila, it is not a clear-cut win for Raila.

The two men appear to be out of shape and time and each needs to rebrand himself. In the build-up to the August 2022 election, Raila ganged up with perceived national political elites and lost his credentials as the underclass champion as well as the election to ‘hustler’ leader, Dr Ruto. In addition, Raila had started losing his hold on Nyanza people as voters elected candidates he did not endorse.

In the lakeside, his word was not law anymore. Similarly, Kalonzo had cornered himself with actions that contradicted his utterances. He had vowed not to be Raila’s man in 2022 because, he said, it would make him the most stupid man on earth.

As he dilly-dallied trying to bargain to become Raila’s deputy, he ended up receiving a promise for a slot as potential prime minister. He missed the two jobs because Ruto supporters Rigathi Gachagua and Musalia Mudavadi bagged both positions.

Although Kalonzo still has political sway in Ukambani and wants Ruto warned that it is “disrespectful to visit one’s homestead without the owner’s consent”, it is not as much as he used to. This is partly because other players reject his claims to own Kamba-land and nibble at his leadership.

These include Chap Chap's Alfred Mutua who chips at the Kalonzo base, adds to Ruto’s vote basket, and is now a Cabinet secretary. Kivutha Kibwana equates Kalonzo to a colonial Chief Kasina who always advanced selfish rather than communal interests. Raila, Prof Kibwana reminds Kalonzo, is not retiring.

In claiming the mantle of opposition leadership, Kalonzo hitches his hopes on Raila retiring. His troops call on Raila to discard power ambitions and endorse Kalonzo. It is time, they say, for Raila 'kurudisha mkono' given that Kalonzo sacrificed his ambitions to help Raila’s failed presidential ventures. Kitui Senator Enoch Wambua, leading in beating Kalonzo’s political drum, annoys ODM die-hards.

On his part, Raila struggles to repackage himself and regain disappearing clout. He goes back to his routine of trying to make governing difficult and demanding constitutional changes out of which he extracts political 'mkate'; he did it in 2008 and 2018.

With no intention of endorsing Kalonzo or retiring his presidential ambitions, he has to cut Kalonzo to size to retain the opposition chief image. He has problems because his claims to ‘freedom fighting’ no longer resonate with a public that remembers his pre-election ‘royal’ pretensions. Instead, his calls for demonstrations boomerang, political disciples such as Babu Owino and Francis Atwoli sing Ruto’s praises, and he looks tired.

In the 2022 General Election, neither Raila nor Kalonzo lived up to expectation. They became damaged political goods which made them desperate to regain stature.

Each, however, has to overcome the impression that he is efficient only in protecting and advancing family political interests. They engage in intense political warfare for opposition leadership and therefore the presumed 2027 flag-bearer.

Making such other contenders as Martha Karua pale in the equation, their political competition is cut-throat. Whose knife will cut deeper into the other’s political throat? 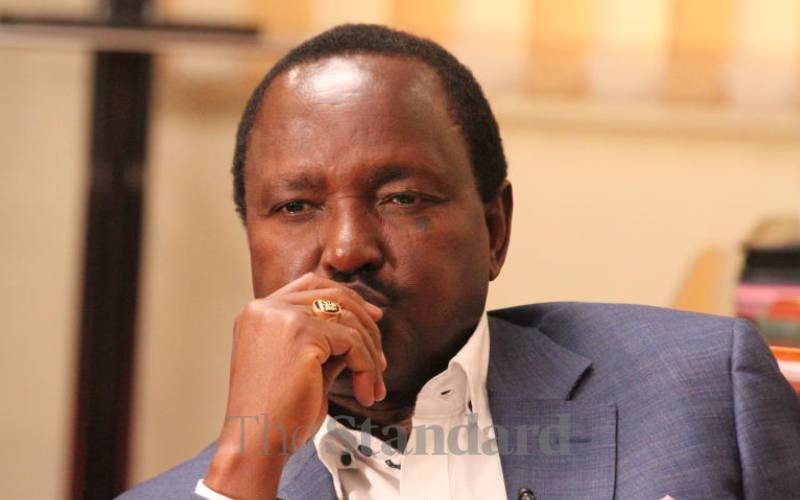