That youth unemployment is an issue of concern in Kenya is no secret with statistics showing that at least 67 per cent of young people in Kenya aged between 15 and 34 are unemployed.

In 2014, Association for Development of Education in Africa commissioned a report dubbed ‘The 2014 Kenya Country Report on Youth Unemployment’ which found that the country’s labour market is characterised by inadequate employment opportunities.

It also found that only 31 per cent of those with tertiary education are in formal employment.

And while students decry the lack of employment opportunities, employers are also on record expressing concern that majority of Kenyan graduates are not employable. Given that every year, without fail, our universities and colleges churn out fresh graduates who are expected to be absorbed into the country’s job market, such an impasse cannot be good for our country.

So, when a call came in about a concept by Barclays Bank Kenya dubbed ‘Ready to Work’, Wednesday LIFE set out to determine whether having corporates step in to address existing skill gaps in students before they graduate can help bridge the gap between prospective employer and employee.

Speaking at the initiative launch held at the University of Nairobi on October 30th, Barclays Bank Managing Director Jeremy Awori said their intention is to work towards improving the calibre of graduates by using an online platform to offer free training that equips them for the market place while they are still in school.

“Ready to Work is meant to complement university training to ensure these tertiary institutions are constantly communicating the relevant requirements of the job market” he said.

Turning to statistics, which the conveners said are the reason behind this initiative, Awori noted concern over the fact that only 13 per cent of KCSE holders are able to join higher learning institutions each year while noting that various reports, by key organisations, paint a grim picture of our graduate’s employability.

Looking specifically at “The Quarter 1 Talent report 2015” by Cooperate Staffing Services Limited, which was released in April this year, it is clear that the challenge for many firms lies in finding the right quality of prospective graduate employees. So, what do employers look for and what is it they miss amongst applicants? The Quarter 1 report says attributes such as, technical expertise, knowledge of the relevant industry, quality of learning and market exposure ranks high in the list of requirements.

“There are so many graduates in the market that already possess the distinct academic qualifications, for this reason competition is very high. So, for one to distinguish themselves, they need to be all rounded, able to think out of the box, possess a certain level of initiative and leadership and be able to relate well with other people in the work place,” Cooperate Staffing Managing Director, Perminus Wainaina said.

The British High Commission has done various reports touching on the employability of graduates from selected African countries.

Its 2015 report on the expansion of university education and challenges of quality and graduate employability in Kenya observes that: “As the higher education system expands, concerns continue to be raised that these institutions do not produce graduates with a broad range of generic skills to enable them get jobs after graduation”.

Their research enumerates events that led to the sudden increase of higher learning institutions and the consequences that followed: “When the government of Kenya adopted a policy to increase the number of public universities, it converted middle level colleges to universities and as a result, in a span of five years, they rose from eight to 22.

The Government also launched an accelerated admissions plan to universities in 2012, to admit students who previously had to wait for 15–21 months after leaving school before joining public universities as government-sponsored students under the parallel programme.

What followed was creation of new courses to slot in the now bulging number of students. The quality of education was subsequently lowered as institutions lacked qualified lecturers and personnel, even worse, funding for university–industry internships, infrastructure and resources were greatly depleted”.

Of greater concern is the fact that not only are these graduates not ready for the job market, they also lack technical know-how that would help them run their own businesses and create employment.

This issue was raised by Dr Jo Beall, Director of Education and Society at The British Council, during launch of the 2014 report on Understanding Graduate Employability in Sub-Saharan Africa. “The challenge for universities and colleges is not just to create employable graduates but those who can employ others to create entrepreneurs,” she said.

Her sentiments would later be justified when the British Council’s 2015 report on ‘Students in the Driving Seat: Young People’s Voices on Higher Education in Africa’ found that 64 per cent of Kenyan students, who are considering self-employment, were “unable to find relevant training within their institutions”.

The report also found that internships and volunteering opportunities are rarely available for majority of students, especially in the humanities and social sciences at a time when most jobs require experience.

While theoretical insights in any field ensure that there is a comprehensive understanding of principles in any given field, contextualising these facts within a supervised and controlled environment during industrial attachment is equally important. This is because it ensures students can adequately apply the concepts in a working environment.

While a day spent observing the Barclays team work the ‘Ready to Work’ concept proved that corporates can indeed help bridge this gap before it is ‘too late’, there are many more sectors that have a role to play if we hope to increase the chances of Kenyan graduates being employed or creating employment.

Top on that list are the students who are required to be more proactive in securing their future.

As Awori reminded the University of Nairobi students: “It is imperative for those eyeing the job market to take it upon themselves to find out what employers are looking for and then acquire those skills in order to enhance their competitiveness”.

Recommendations by organisations that have conducted researches into this sensitive topic call upon employers to invest in employee training while the State is urged to work towards decreasing the student-lecturer ratio and improve infrastructure especially in public universities. The campuses have, on their part, been encouraged to improve skills of existing institutional staff and enhance the students’ voice as pertains to the learning experience while the students themselves are challenged to look beyond “just books”.

“Students need to know that school is not only about books. Beyond attaining a grade A in high school and a first class in campus, they also need to develop soft skills that will prepare them for the work environment - be they employers or employees,” Wainaina said. 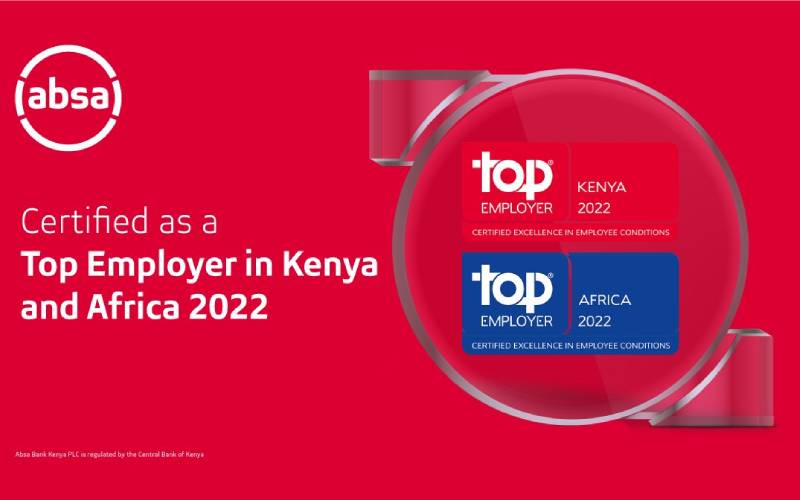 Absa Bank wins global accolade as top employer in Kenya and Africa in 2022
The award recognizes Absa's commitment to making the workplace a better place to work, as evidenced by 'outstanding HR policies and people practices.'
Branding Voice
By Absa Bank
5 months ago
.