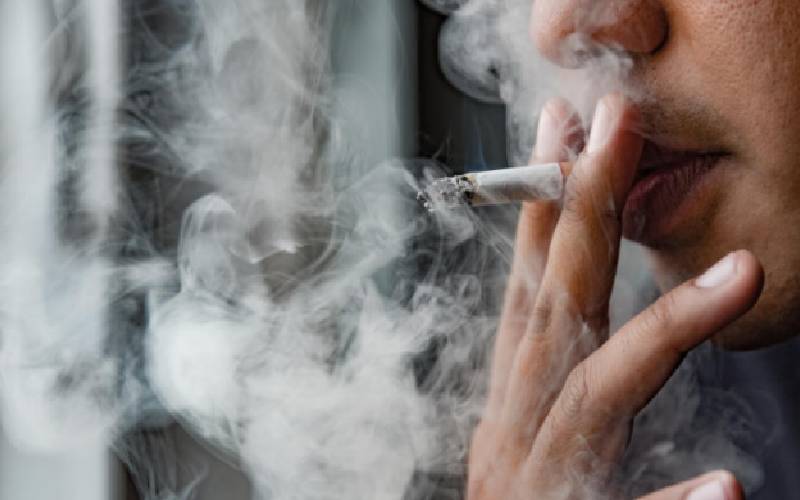 A draft legislative proposal seeking to raise the minimum age for smoking tobacco from the current 18 to 21 has been submitted to Parliament.

Africa Centre for Corrective and Preventive Action (ACCPA) wants both the National Assembly and the Senate to consider a proposed amendment to Tobacco Control.

The proposal also seeks to ban the production, importation, sale and consumption of mentholated tobacco products.

The proposal aims to discourage young people from taking up smoking or help them quit through progressive legislation.

Should it get the backing of the MPs and subsequent enactment into law, Kenya would join the United Kingdom, USA, Chile, Canada, Ethiopia and Turkey that have legislation against the production and importation of tobacco products.

The lobby group has since submitted a memorandum to the two Houses for their consideration and is set to roll out elaborate public participation across the country.

ACCPA Executive Director John Macharia said the decision to raise the minimum age for those who can use the substance is aimed at reducing deaths caused by tobacco smoking.

He said teenagers aged 18 end up smoking due to peer pressure and impulsive decisions that they later regret.

“There is scientific evidence that young people in high-arousal situations are at risk of making impulsive decisions up to their mid-20s,” he said.

“Tobacco use has serious health consequences, and initiating young people at the age of majority is risky as they cannot link consequences to their actions,” added Macharia.

According to the lobby, smoking is the leading cause of preventable death worldwide, causing more than seven million deaths annually.

ACCPA said there was a risk of the number going up to about eight million by 2030 if the smoking pattern does not change.

The lobby also called upon all the 47 devolved governments to consider adopting comprehensive smoke-free policies and legislations at the county level.

“Lawmakers should put in place legal provisions to nurture and protect the future generation against tobacco and move steadily towards a tobacco-free future,” said Macharia.

The lobby said the journey to realizing the new regulations has been long, dating back to 1994, citing external interferences and prolonged litigations.

It also cites notable gaps making regulations not adequate and in tandem with global trends that ultimately aim to have a smoking-free world.

By Renson Mnyamwezi | 8 hours ago