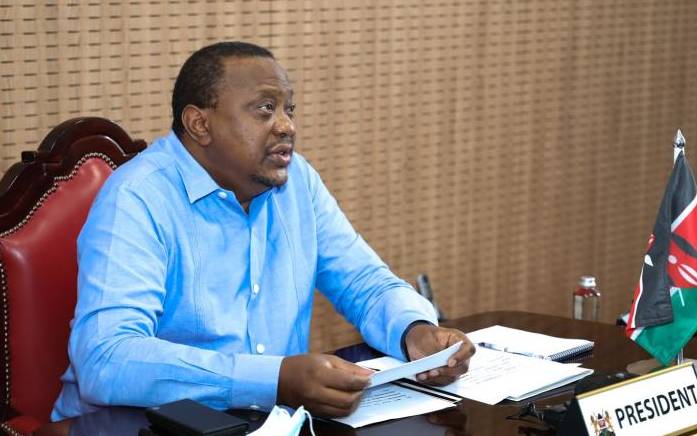 President Uhuru Kenyatta (pictured above) spent part of Saturday night inspecting projects in the city in a move that left many in surprise.

The president who was accompanied by Nairobi Metropolitan Service officials led by Director General Maj Gen Mohamed Badi first visited Kenyatta Avenue for a while before driving away. There are many sidewalks under construction in the city.

Kenyatta was driving himself in a salon police car all through his journey with lean security in the trail. He later went to Kirinyaga Road where he met a crowd and briefly addressed them before driving off.

The cars were later spotted along Thika Road, Outering Road and Jogoo Road where he could stop to inspect a project that is under construction.

He also visited a market that is under construction along Kangundo Road at about 2 am before leaving without addressing a group that had gathered there.

The president drove back to the city and could be seen stopping to talk to police officers on foot patrol. He later visited Kilimani Police Station to check how it is operating and told the officers on duty how he was impressed by the newly launched digital Occurrence Book (OB). The OB which was launched in Nairobi on August 3 by Interior Cabinet Secretary Fred Matiang'i enables officers to record incidents at the scenes and is difficult to manipulate.

Kenyatta signed a visitors’ book at the station before leaving.

“Visit to Kilimani to view progress with new OB. Well done, keep it up,” the president wrote in the book.

Witnesses said he looked happy and ready to spend the night out.

“He was not in a hurry. He was in a jovial mood driving himself and seemed to know the city roads well,” said an official who knew about the movements.

Many officers were caught off guard and could mobilise to cover his movements on a specific route for him to change and use a different one.

The crowd that gathered where Kenyatta stopped to inspect the projects were asked not take his photos.

This is the fifth such visit he is making in the city with a lean security team.

The president in the company of ODM leader Raila Odinga had in June inspected ongoing rehabilitation exercise of roads in the CBD.

The motorcade later visited Eastleigh and Juja Road. He also visited projects in Mukuru slums, Railways area in the CBD and Jogoo Road. Some accused him of breaking the Covid-19 pandemic rules.

NMS is under Office of the President.

Kenyatta also made a surprise visit to Uhuru Gardens along Langata Road, Nairobi which led to its immediate closure.

The president who arrived in an unmarked car drove into the Gardens and inspected it before he was seen making calls.

This came amid reports the Memorial Park had been handed over to the Kenya Defence Forces for refurbishment and further use.

It was being managed by the Museums of Kenya which is under the ministry of sports.

Tenants who have been operating from the park were given a day to move out their belongings.

After the president arrived and left, a team of military officers arrived and started to fence it that night.

Those within the park then said they overheard the president question the receiver who they believe was a senior military officer on what they had done since the park was handed over to them.

The president seems to be free at night when there is less traffic movements in the city.