COUNTIES
By Cyrus Ombati and Patel Okumu | May 6th 2016

His car had ten bullet holes when it was found with engine running shortly after the 9.30 pm incident and door flung. It gave an indication the killers went to confirm he had died.

The incident happened along Ngong Road near the Southern by pass and past Lenana School.

Nairobi police boss Japheth Koome said the businessman was driving from his bar in Westlands at around 9.30pm to his Karen home when he was shot by gunmen who escaped on a motorbike.

Police who attended to the scene said they found his identity card, Sh6,500, five Euros and two mobile phones.

"We don't know the motive but this seems to be a pure murder. The body is at the City Mortuary," said Koome.

The 45-year-old who ventured into business after compleating his studies at the University of Nairobi has been vocal on political issues and severally bashed the government.

He will be remembered for claiming his mining license was revoked after he allegedly declined to pay a bribe demanded by then mining cabinet secretary Najib Balala.

The businessman has been in the forefront talking about Eurobond saga and other forms of corruption in government.

He had in December and January  sessionally claimed government officials planned to assassinate him.

He had also sued National Cereals and Produce Board for unpaid dues.

His wife did not know of the death until Friday morning. Juma's friend and lawyer Ahmedinasir Abdulahi termed the murder macabre and unfortunate and revealed he had been with him on Thursday evening.

Police in Nairobi have confirmed that they are investigating the 9:30 pm incident.

Below are some of Jacob Juma's controversial posts on twitter. 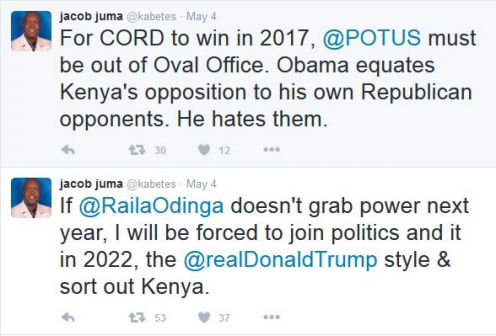 There is massive importation of counterfeit liquor from China, National Authority for the Campaign against Drug and Alcohol Abuse (Nacada) has warned.

By Josphat Kinyanjui | 5 hours ago