Scientists in efforts to save frogs in Kenya 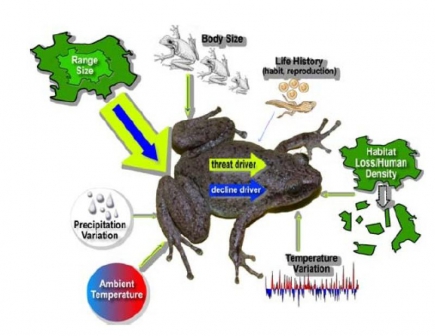 Researchers have expressed concern about the high rate of frog depopulation in Kenya.

They have singled out disease and the destruction of natural habitats as the major factors threatening frogs.

Based on this, the National Museums of Kenya (NMK) and a US university are working together to develop a technology that will help track all animals classified as amphibians with a view to protecting them.

The project will target species the International Union for Conservation of Nature (IUCN) says are endangered.

Data from IUCN shows 1,800 species of amphibians across the world face extinction. At least 235 are in sub-Saharan Africa, where the main challenge is destruction of habitats.

"The first major goal of our project is to collate information about amphibians in Kenya. We will build this from existing records. We will then create a digital inventory that we will update from time to time," said Sharon Kahara, a researcher from Humboldt State University in the US.

The project will target all cold-blooded animals classified as amphibians, including frogs, toads, newts and salamanders.

“Traditional survey techniques are difficult to use. However, we will now be able to use cutting-edge technology to detect the presence of species in the environment,” said Victor Wasonga, a researcher at NMK.

He said they were hoping to come up with a better way of documenting to enhance the protection of animals that live in the soil, water and any other habitats.

The researchers said the rate at which amphibians were declining was worrying and that the situation had been compounded further by lack of information about the species.

Besides the 235 species under threat of extinction in sub-Saharan Africa, there is no information on 201 other species.

"We therefore need to make efforts to collect relevant information about them, otherwise we will continue losing them," stated Ms Kahara in a report published last week on a US-based science research website, experiment.com

Another website about amphibians notes an emerging disease called chytridiomycosis that has continued to wreak havoc, killing species across the world.

"Chytridiomycosis is a fungal disease associated with the loss of hundreds of species of amphibians in the world," says the website amphibianweb.org, which adds that climate change presents the biggest threat to amphibians.

Human activity including logging, agricultural expansion, climate change and alien species that are invading the natural habitats of frogs have also led to the decline of species in Kenya.

Poor waste management has also been blamed for the decline of amphibian populations due to pollution of water bodies where they live.