A drive across Kitui county tells a story of communities struggling with drought and access to water.

Along the way are herds of cattle, sheep and goats, being driven towards the few water sources as they scramble for the scantly available pasture.

At Kiati village, we find Mbete Mohammed preparing her piece of land in readiness for the anticipated short rains which weather forecasters say will be low and unevenly distributed.

Her land looks bare, with nothing at ground level and not even farm waste which can show signs of crop farming in earlier days. A few pawpaw trees have survived the long dry season, with the area barely receiving any rainfall for the past two years.

“If I tell you stories of this land you might think I am sugar-coating. But the fact is that this, and other areas surrounding were very productive when we used to irrigate our farms from Kwa Ndaki earth dam,” says Mbete.

The dam has since dried up leaving locals desperate for water, turning irrigation into a luxury for a population that can hardly access the resource for domestic use. A few metres from the farm, is a different story altogether, one would be forgiven for thinking that you are in the highlands.

She has an order from a few local families who are her regular clients.

On a good day, she says, she makes Sh100 from selling vegetables. She however wishes she would expand her portion amid rising demand for green leafy vegetables in an area that is considered arid and semi-arid lands (ASALs).

She checks on one of the watermelons on her farm, it weighs more than five kilogrammes already yet it is still not yet ready for harvesting.

“This is evidence that this area is very productive, the only challenge remains access to water,” says Kathini.

These are two contradicting stories within the same proximity, barely 100 metres apart. A story of a dam that served locals since 2015 before it dried up, and a woman who is now accessing water from a well, formed from the dam’s outlet. “We used to walk for seven kilometres in search of water before this dam was established, but when it was done, we even turned to horticultural production,” recalls Mbete.

“Some farmers like me did commercial farming while others established kitchen gardens thus improving their families’ nutrition.”

From buying a 20-litre jerrican of water at Sh1, residents are now accessing the same at Sh5, amid already hard economic times.

The area, and largely Kitui county is among regions in the country which have barely received any rainfall for the past four seasons.

Silting reduces the capacity of the reservoirs to hold water. Thus, desilting restores the water holding capacity and also provides an opportunity to expand the capacity where need be.

“Between August and November 2022, we have supported the desilting of 14 dams and water pans in ASALs at a cost of more than Sh70 million provided by the European Union,” says NDMA Chief Executive Officer Lt Col (Rtd) Hared Hassan.

The CEO adds that NDMA prioritised desilting of the dams and water pans that had dried up during the prolonged drought since water trucking is expensive and unsustainable. This will facilitate the harvesting of water from the current rains that will see communities through the upcoming depressing seasons.

At the time of our visit, desilting of the 154,000 cubic metres Kwa Ndaki dam was ongoing, whose capacity had dropped by about 40 per cent. The cost of desilting is Sh4.9 million, according to NDMA.

“We are looking at regaining the full capacity of these dams so that as much water as possible is harvested for the benefit of local communities, livestock and food security in the ASALs,” says Wilson Oduor, NDMA Kitui Assistant Director, Drought Information.

Also to be replanted is some grass around the dam to not only control soil erosion but also contribute to livestock fodder security.

For now, this community is left with nothing much but hope that rains will fall in their favour and fill their dam so they can access water and resume farming. Area assistant chief Kingeele Kiema says the lack of farming activities in the area is not only affecting food security, but residents can no longer get proper nutrition.

“The crops like spinach, corridor green, onions and fruits which used to be grown here are no longer easily available and affordable meaning many families cannot access balanced diet,” says Kingeele. 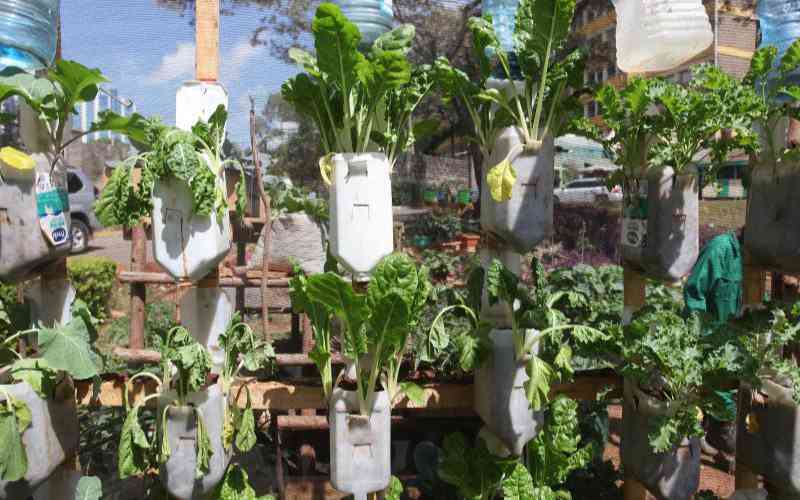 A Christmas feast from our kitchen gardens
A kitchen garden during the festivities will cut the budget by a huge fraction.
Smart Harvest
By Jennifer Anyango
Dec. 29, 2022